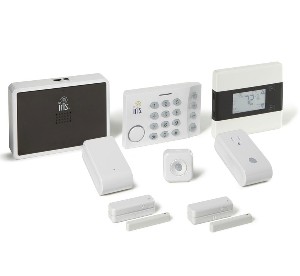 If you believe installing your own home security system is too difficult, there’s a good chance that newer systems on the market will prove you wrong. I’ve been using the Iris system by Lowe’s for a few weeks for a new home automation review, and above all what strikes me about this package is how easy it was to install and how easy it is to customize the programing. If you can setup a Facebook page you can do this.

What exactly is this? The Iris system offers basic home security and automation products that all work together with a smart phone/tablet app that integrates any of the various smart modules. Most people will begin with one of the Iris starter kits. The Safe and Secure kit includes door and motion sensors plus a keypad. The Comfort and Control kit includes a thermostat and smart plug, and the Smart Kit is a combination of the other two. All of them include the Iris hub which is necessary for any Iris system installation.

Iris works with both wireless Z-Wave and Wi-Fi devices (the hub also supports Zigbee), and while those are fairly universal protocols, not all wireless devices are made alike. That’s why Iris has its own line of products (only sold at Lowe’s and Lowes.com), which cover most devices a basic security or control system buyer would need. There are door and window contact sensors, motion detectors, surveillance cameras (indoor and out), smoke and CO2 detectors, door locks, water leak detector, a smart valve, garage door openers (coming later this year), light switches… you get it.

I started with the Smart Kit ($299) which combines temperature control and basic home security. In the box is the Iris hub, a smart thermostat, two door/window contact sensors, one motion sensor, a Z-Wave extender and a smart outlet plug. If you start with this kit, you’ll probably want to pick up a few more contact sensors right away for $20 each.

The first thing you set up is the hub. It gets connected directly to your network Wi-Fi router. It sends and receives Wi-Fi commands through your router and receives Z-Wave commands directly. The hub also has a speaker that plays announcements and alarms. Setting up the hub took just a few minutes, which involves calling in a pin number to Lowe’s to activate it. You’ll also need a credit card. While basic operation of the system requires no monthly fee, a Premium service costs $10 a month (free for your first month).

Part of the set up process will involve selecting a user name and password to access and configure different aspects of your system from a computer. The easiest thing to do is to keep a laptop with you as you’re setting everything up.

The hub’s volume is adjustable, but not adjustable enough. Alerts and simple message are all the same volume. I’d want the alarm beeps at full volume when an intruder alert is triggered, but much quieter when the system is simply confirming that I’ve armed it for the night.

The next most important part of the Iris system is the home control app, which works both on iOS and Android smart phones and tablets. With the app you can adjust, set, arm, monitor most features of the system, though some of the more involved automation features (Iris calls this Magic) can only be done at a computer. 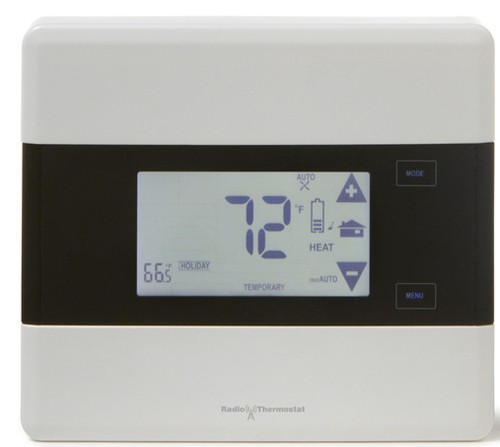 After connecting the hub, I installed the thermostat. That went in about as easy as any other thermostat, which is to say that there are a lot of little colored wires, so make sure you get the right ones pointed to the right place. Setup of the thermostat will vary depending on the kind of heating and cooling system you have.

The Iris touchscreen thermostat allows temperature controls both at the device itself or through the app or web interface on a computer. The thermostat isn’t as cool to look at as something like the Nest, but it’s fairly thin (thinner than the old Honeywell I replaced) and doesn’t look bad. You can schedule Home, Away, Night and Vacation modes, and other standard temperature adjustments. I set mine up with very basic day and night modes. If my family gets too warm or too cold, we just pull up the app and make the change.

Adding the additional devices (contact sensors, motion detector and smart plug) all was completed in just a few minutes. The Z-Wave extender didn’t want to connect at first, but was fine after a second try. It wasn’t really necessary in my setup anyway since all the devices were installed on the same floor and close enough that they connected directly to the hub without problem (you can check signal strength on your Iris home page).

Since this system was primarily about security, the keypad was, well, key. That product requires you to select a personal pin number for disarming the system. You can also arm and disarm it with your smart phone without the pin—that’s a nice feature in case you forgot to arm it when you left the house or want to disarm it remotely so someone can enter without triggering the system.

In addition to the numerical keypad, there’s a panic button, which sends alerts to everyone on your alert list. 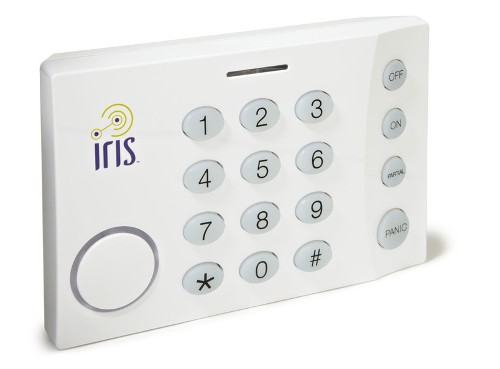 Arming and disarming the system requires you to key in your PIN number and then press On, Off or Partial. Partial only arms the door/window contact sensors but not the motion sensors. You’d likely want to use that setting at night so people can still walk around the house without setting the system off.

When you arm the system it makes an announcements and then gives you 15 seconds to get out of the house and close the door before all the sensors are active.

In the weeks I’ve been using it the system has been pretty reliable. I never received a false alarm, and all my test alarms were triggered properly. If anything, the motion detector is too sensitive, so place where it’s not looking out a window. When an activity is detected, alerts are sent to the contacts you entered during the setup process (you can add or delete contacts later). If you add a camera (the Smart Kit doesn’t come with one, but you can add a camera for $130) you can program it to start recording as soon as motion is detected or another sensor is triggered. If you get an alert that something’s going on you can either rush home to see what’s up or view the video on your phone to look for yourself (I didn’t install a camera so I can’t say how good the image is).

Unlike some professionally monitored systems Iris does not alert the police or fire department when triggered. It’s not actually monitored by live people—the phone and text messages are all automated. If you think an alert is due to an actual crime it’s up to you to get in touch with the authorities.

One of the fun bits about Iris is voice control. Using your smart phone you can deliver simple voice commands (“set alarm to on,” “turn porch light on,” “set thermostat to 70”). Are voice commands really easier or faster than tapping the phone? No, but it looks cool when showing off to your neighbor. Note, you can PIN protect the Iris app so someone can’t steal your phone and turn off your alarm.

As a basic security system Iris seems competent and will add peace of mind when you leave the house. You can turn it into more of an automation system by adding Z-Wave light switches and other devices. Iris makes managing and linking devices simple in the Magic part of the home page. For instance, you can have certain lights programmed to turn on when an alarm is triggered. There you’ll see a number of scenarios for connecting devices in a sort of if-this-then-that process, but it’s not nearly as customizable as a professional automation system. The devices it can control are also limited compared to some other systems, but the list of Iris-compatible products is growing.

Remote operation with the app can sometimes be slow, very slow. There were more than a few times when I was trying to adjust the temperature remotely and the app eventually gave up after several minutes. This could be due to my cell phone’s connection. I really don’t have any way of knowing, but it would be frustrating if I was trying to do something more important than turning the temp down (like unlocking the front door for a guest.)

The Iris system also isn’t as attractive or invisible as professionally-installed systems. The keypad is bulky and the contact sensors are also fairly large, but that’s what you get for a system this inexpensive. You also can’t program personalized scenes, such as lighting scenes, which professional systems offer. Also it isn’t compatible with any audio/video equipment. You can’t get Iris to control your Sonos audio system or your Philips Hue lights (Revolv can control both those, but with limited functionality, see our review here).

Back to that $10 a month I mentioned earlier. There are several control or security products that require no monthly fee, and many others that charge a lot more than $10 a month. With the free plan from Iris you get basic on/off arming and individual control of all the devices you installed. You also get email, text and voice alerts to only one contact name whenever an alarm is triggered. When you add the premium service you get access to the Magic—the automation part of the package where multiple devices are linked together. You also can add up to 20 contacts for alarm alerts (very useful when you’re out of town), plus extended video storage for your security cameras. While some control systems (such as the Staples Connect and Revolv) don’t charge for similar functionality, Lowe’s does. Is it worth it? It you buy the Iris system, then yes, it absolutely is.

The Iris Smart Kit or Safe and Secure Kit ($179) would be good systems for apartment dwellers who want a little security but don’t want to make a big investment. Owners of single-family homes or people with more complex needs will need to budget for add-on devices or opt for a professionally installed system.

This article was originally published in March 2014. Updated September 28, 2015