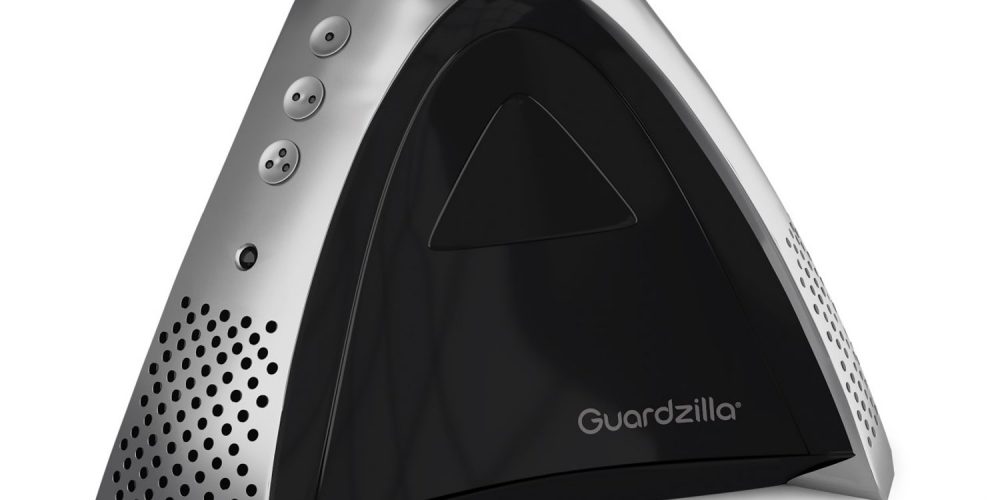 Oh no, not another “Godzilla” remake. No, this time, it’s “Guardzilla” and I promise there will be no breathing fire, destruction of passenger trains or giant moths to battle. Indeed, I admit I was skeptical when I ordered a Guardzilla 360 security camera for the house. I mean the name is certainly catchy, but it was actually the feature set that drew my attention. How can a DIY wireless security camera offer two-way audio, geo-fencing capability, night-vision, and a 360-degree view for just $229.99?

Before I even removed it from the box, I found myself whistling, humming and singing a derivation of Blue Oyster Cult’s hit song “Godzilla” (aka “Guardzilla”) during the entire setup process. (I am still singing it.)

But catchy name aside, as a DIY solution, Guardzilla 360 hits the mark. The HD Wi-Fi security camera enable customers to monitor their homes inside and out from their smartphone via a full 360-degree live HD viewing camera with motion detection capabilities, along with night vision, a full security suite and full duplex audio communication.

Guardzilla 360 provides a live 360-degree field of view, 360-degree night vision, and 360-degree motion detection with instant phone alerts. The camera also features a speaker and microphone system that enables full-duplex, two-way conversing; and three programmable call buttons for one-touch push notifications to smartphones. The Guardzilla 360 also offers a full security suite, including a 100dB siren, PIR motion sensors and geo-fencing, which automatically arms or disarms the system when the user’s smartphone is detected exiting or entering the GPS-driven perimeter.

Installation Ease–Even in an Old House

Living in an old converted barn built in 1875, I am reticent to drill holes in the walls and floors, which are all pine, some of which are original hand-hewn wood. At the same time, my wife is the “Amazon Queen” in that it seems we have Amazon package deliveries daily. Knowing there would be in influx of boxes being stacked on the porch for the holidays, I ordered a Guardzilla 360. I positioned the camera on a wide sill below a long window in the mudroom/kitchen area. From this position, the camera can view into our living room, kitchen, mudroom and most importantly, out the window onto the porch. If any “porch pirates” should appear, Guardzilla would be ready.

Setup could not be simpler, especially since the app itself is loaded with nine separate “Help Videos” that step you through the entire process. I just plugged it into a nearby outlet and downloaded the companion app. Via the Settings menu I can link the camera to Nest, Amazon Alexa, Google Assistant and create IFTTT commands if necessary. The menu also allows me to change the image quality, add contacts to the call list, set the arming for delayed activation, and adjust the motion detection and audio detection sensitivity levels.

The unit is tied to my wife’s cellphone for geo-fencing, but that also meant the camera was armed when she wasn’t away. The first time I came home from work and she was not there, the Guardzilla 360 let out a piercing siren that would have evacuated Tokyo. Pointer: remember to link the camera to everyone’s cellphone in the home.

With any DIY camera solution that is not monitored, the more you use the camera, the better. We routinely check the camera as part of our daily app usage. I have even gotten into the routine of pulling up the camera and talking to the kids when I get ready to leave for work. There is an argument that a DIY camera like this is more of a gadget than real security, so to quell that line of thought Guardzilla also offers the option for professional monitoring. The company offers a $9.99 per month central station monitoring with no fees.

What Would I Change?

There are a few things I would change about Guardzilla. First, I would make the power cord longer. I would rather have to bundle extra cable versus stretch a too-short power cord to the optimum camera position.

Second, the night vision camera certain works well, but the IR reflection off the glass (remember I have it positioned by the window to view the porch) makes the camera image looking outside unusable at night, unless we leave the porch light on. The night vision feature can be shut off, but then the camera would not be able to pick up any usage images inside the home at night.

Third, the two-way audio works well for listening, but the speaker capabilities seem weak. When I use the app, I can certainly see and hear what’s going on, but when I tried to communicate to my daughters who were literally standing right next to the camera, there is a bit of latency that makes conversations tough. It could be my home network. My wife similarly attempted to contact me with a voice via the camera one day… I never heard a word. (Was that intentional on my part?)

Guardzilla 360 sells for $229.99 online and in-store from retailers across the country including Walmart, Target, Staples, and Best Buy.

So how good is Guardzilla? I overheard my wife telling a friend that we need a second one.