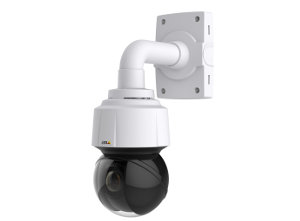 Not any old surveillance camera will do when it comes to keeping an eye on outdoor areas. In addition to being able withstand the elements, outdoor surveillance cameras–at least the good ones like the AXIS P3364-VE–include other features that help them capture all the important moments in an environment that’s a lot less predictable than areas inside your home.

Here are a few of the key technologies that help the P3364-VE perform admirably outside:

And now that the video world is embracing 4K, Axis is keeping pace by offering a pan/tilt/zoom camera with 4K resolution. It’s compact and suitable for both outdoor and indoor installations, and functions superbly in low light and challenging environmental conditions.

Incorporated into the Axis Q6128-E is the company’s Sharpdome technology, which enables exceptional coverage of large areas–above and below the horizon–with great detail when zooming in. A Speed Dry function provides sharp images even in rainy conditions. It is engineered to function in temperatures ranging from -58 degrees to 122 degrees Fahrenheit, and features automatic defog.

“The 4K standard was driven by the consumer market and we brought this technology to the security industry with the release of the Axis P1428-E, our first 4K camera,” says Fredrik Nilsson, general manager, Axis Communications, Inc. “The camera was well received and generated a lot of interest, so we incorporated 4K resolution into the powerful and feature-rich Axis Q61 Series.”
The Axis Q6128-E PTZ Dome Network Camera carries a suggested retail price of $3,199.