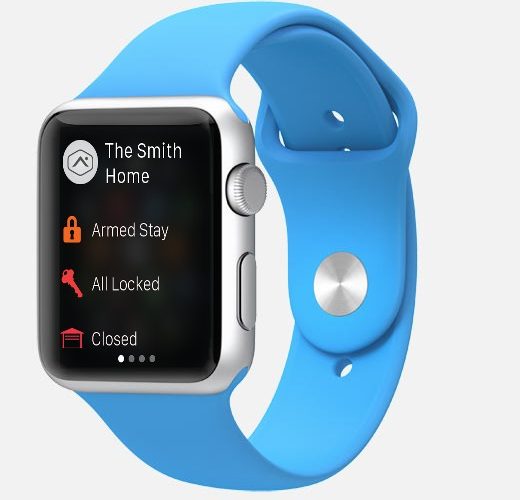 While the Apple Watch will handle many other tasks, Alarm.com believes that the smart home scenario is one of the most compelling applications of the wearable.

The new Apple Watch, slated for availability April 24, will be able to juggle many tasks—fitness tracking, web surfing, making transactions, and more, but a new app from alarm.com, created expressly for the Apple Watch, can let you monitor and control the electronic devices and home security system in your home with the flick of the wrist. And we mean this quite literally.

As Alarm.com senior vice president of marketing Jay Kenny explains, by turning your wrist, the app appears on the screen of the watch, showing you the status of your home devices. These status report could tell you in an instant if the garage door is open or closed, if the security system is armed or not and if someone has unlocked the front door, for example.

The Apple Watch is also a great tool for alarm.com’s innovative geofencing feature—a technology that initiates commands to smart home devices based on your whereabouts. Currently, the alarm.com home control platform bases its commands on the location of a user’s GPS-enabled cellphone. With the new alarm.com app loaded on the watch, your home control system can respond to the location of the watch instead. While you’re wearing it, it can tell when you’re within the appropriate range—perhaps three miles from your house—to kick start the stereo system, porch and foyer lights and furnace, for example, for your arrival. You can also receive alerts, based on your proximity to your house. For example, the watch could vibrate to let you know that you left a door unlocked or the curling iron on. Then, by just tapping the words “door lock” displayed on the face of the watch, you can lock the door. Another tap might bring up a real-time image captured by a surveillance camera at the front door.

The alarm.com app leverages the Apple Watch’s unique “at a glance” and “quick touch” features, as well as the form factor of the watch face, says Kenny. Instead of having to load an app or scroll through a menu, the Apple Watch notifies you, shows you and lets you engage with your smart home devices in seconds. “Right on your wrist, you have an instant window into your home.”

While the Apple Watch will handle many other tasks, Kenny believes that the smart home and home security systems scenario is one of the most compelling applications of the wearable. “We’re excited about the platform and the implications it has for the growing popularity of the smart home.”

The alarm.com app will be available for download from the Apple Store when the watch is available. Naturally, watch wearers will need to have an alarm.com-enabled home control system installed in their homes in order to use the app, which is free for the initial download, but afterwards requires a $40-$60 monthly subscription to the alarm.com service.

UPDATE: Lighting control manufacturer Lutron has also created an app for the the Apple Watch for its Caseta Wireless smart home system. You can watch a little video demonstration of it here: