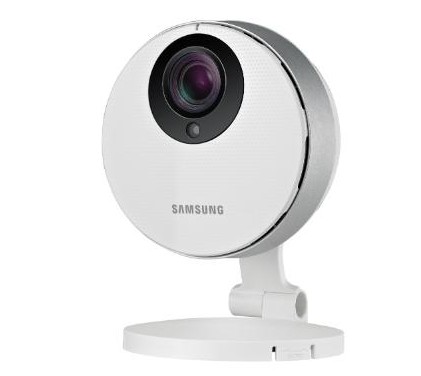 Do you want to see what your dog is doing during the day? Maybe you want to make sure your teenagers aren’t throwing a party while you’re away for a weekend. Today, there are plenty of DIY home security options that work in conjunction with smartphones, tablets and computers. That way, you can check in on your home, whether you’re sitting in your office or soaking up the sun on a beach that’s 3,000 miles away.

A complete security system can be costly. If all you need is a little peek at the living room now and then, there are a variety of stand-alone security cameras that are inexpensive, easy to set up, and can work alone — as well as in pairs. Whether you opt to set up one camera in the living room or outfit the entire house, these security solutions can save you from any post-vacation surprises left behind by thieves, vandals, and even Mother Nature.

Belkin first announced this little cam back in January at CES. Available now, the WiFi-enabled camera can be set up without any help from a PC. Just plug it in and use the app to get everything up and running—and spying. It can stream audio and 720p HD video. Also, because it has a wide-view lens, it’s nice for larger spaces. Pair it with the free NetCam app for live viewing or to record the action right to your portable. Other features include night vision, alerts, and support for iOS and Android devices.
Price: $95.79

This DIY home Security product’s name doesn’t exactly roll off the tongue and neither does the cam’s list of features. Yes, there are that many of them! The wireless 2-megapixel IP camera has pan, tilt and zoom, as well as quad video streaming and even a microSD card slot. That slot means that you can save images and video for later viewing. However, if you just want to check in on your house, children or dog, the camera provides a real-time peek through any web-connected computer, smartphone or tablet. It can also look at all three (and more), with support for up to 16 cameras around the house.
Price: Approx. $375

The Piper NV is a follow up of the original Piper from iControl. Like the standard Piper, the NV boast a 180-degree field of view. As is standard with iControl Networks’ first-generation Wi-Fi-enabled Piper security camera, the night vision model can be set to detect motion and to integrate with other Z-Wave devices, such as thermostats and lights switches. This enables the camera to activate the lights and adjust the thermostat when it senses motion, for example. The camera can also monitor the temperature, humidity, light level and sound, and send you a text or email alert if these conditions exceed a certain predefined threshold. Videos recorded by the Piper are stored on a cloud sever and accessible via smartphone or tablet. Piper NV comes in either white or black for $279.

Dropcam was purchased by Nest in 2014, and there are neat ways you can integrate the two, but the Dropcam Pro is also a good DIY home security camera without the Nest thermostat. This WiFi security camera has a wide 130 degree viewing angle, so you can see a whole room in one glance. An 8x zoom and HD video recording means you can see details some cameras don’t pick up. The Dropcam with night vision includes both a microphone and a speaker, so you can talk back to people (or pets) as you’re viewing them. Saving recordings to the cloud requires an annual fee, starting at $99. The camera itself costs $197.95.

The latest iZON compact Wi-Fi security camera is so super slim, it can be placed almost anywhere. In fact, it can nestle very nicely on a shelf or somewhere else where it isn’t so out in the open. From there, it will watch and listen—and even alert you to when there’s motion or noise, via push notifications through the iOS or Android app. The iZON can tilt and swivel from a flat surface or be mounted to the ceiling.
Price: Approx. $49

This SwannEye WiFi camera looks more professional than the others, and that’s because not only does it record night scenes (up to 32 feet) but it also includes a tilt/pan function, so you can move your digital eyes around the room up to 350 degrees. A microphone and speaker allow for two-way communications. It works with the Swann app for both Android or Apple devices. No annual fee. Approx. $101

This plug-and-play HomeMonitor system promises instant security in minutes, thanks to both WiFi and Ethernet connectivity. Once it’s hooked to the network, create an online account and start peeping through any web-enabled computer or smartphone. There are no monthly fees and users can link several cameras for a whole-house solution. Another bonus is that Y-Cam offers indoor and outdoor HomeMonitor options. Each setup has free live streaming, 7 days of cloud storage, and unlimited email alerts. If you’re into hoarding some of those tense moments, you can store alerts for up to 30 days for $39.99 per year per camera. $199.99 to $349.99

It’s nice to keep an eye on what’s going on inside your home. However, there are plenty of outdoorsy predators as well. This waterproof camera is perfect for outside, providing a 60-degree viewing angle, night vision, and motion detection with snapshots via email. The IP350 also offers backup via a computer or in the cloud, as well as access through iOS and Android apps. It’s also perfect for larger families, since it can support up to nine cameras online. Price: $129.99

The Sengled Snap is an LED light bulb with an integrated 720p IP security camera, speaker and microphone. It even has geo-fencing and facial recognition, so the bulb knows the difference between an intruder and the family dog. Also worth mentioning is that this tiny smart bulb has a built-in WiFi signal repeater, so it can strengthen your wireless signal in some of those dead-ish spots around the house. Price: $149.99.

The Arlo works with your home’s existing Wi-Fi system to deliver clear, 720p video from just about every angle, both inside and outdoors. It features a 130-degree field of view, motion sensors, and more. The Arlo is completely wireless, which means that it doesn’t even need a power cord. Instead, it’s battery-operated, which boasts about six months of security (depending on usage), all without needing a nearby outlet. Arlo offers real-time notifications via email and the free Arlo app for iOS and Android devices. That same app allows users to watch live or recorded video, check out motion-event recordings, customize alerts, and arm/disarm motion-sensors. One app can display as many as four cameras at once. To use Also cameras you need a base station, which comes with the system. Just connect the base station to your WiFi router, sync your cameras, fire up the free Arlo app, and you’re done in minutes. A single camera with base station costs $134.99.

The SmartCam HD Pro Wi-Fi camera records in full HD 1080p video quality and delivers real-time notification of activity through your iOS or Android phones and tablets. It also has a built-in slot for a microSDXC memory card which allows for video storage for later review. Advanced features include Wide Dynamic Range, Samsung Light Enhancer, Advanced Motion & Audio Detection, and Motion Zone Select. Each camera is equipped with a built-in microphone and speaker for crisp, clear Two-Way Talk. $153.

The iCamera KEEP wireless home security camera offers HD images (with a 1280 x 720 resolution), motion and audio detection, and on-demand streaming video control from your smartphone. Just tap into all of the features via the free iSmartAlarm app for iOS and Android devices. Other features include 350-by-40-degree pan and tilt options, night vision, and both multi-user and multi-iCamera (up to four) support. It will send out text, email and push notifications—and even phone calls, if you want them. And if the camera manages to capture something worth keeping, iSmart Alarm offers cloud storage for 10-second video clips free of charge. $150