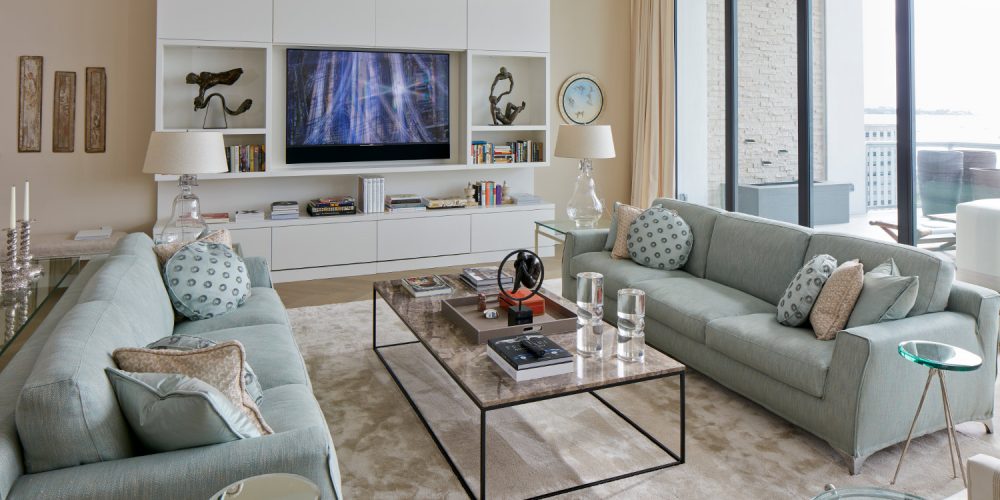 When you’re willing to get creative with the smart systems in your house, some really great things can happen. The owners of this 4,000+ square foot penthouse apartment in Sarasota, Fla., were ready to think outside of the box when they hired local home systems integration firm Wicked Smart Homes to rig their digs with some truly inspired applications of technology.

One of the most unique facets of this smart home is a motorized shelf that lifts out of the kitchen island. The shelf holds the owners’ espresso maker, toaster and other small appliances. All of the gadgets are easily accessible when the shelf is in the up position.  At the touch of a button on a smartphone or tablet, the shelf lowers and the clutter goes into hiding.

In this positon the top of the shelf rests flush with the rest of the countertop. “It’s a really cool effect that keeps the kitchen looking super clean and streamlined—exactly what the homeowners wanted,” says Wicked Smart Home president Mark Bolduc. A similar motorized shelving unit in a bar tucks away the homeowners’ wine collection until they are ready to entertain. 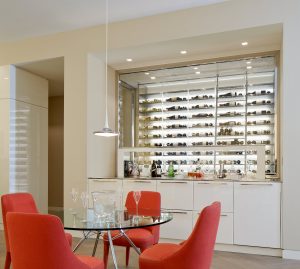 Motorization makes a statement in other ways, too. The doors on a custom entertainment cabinet swing open to expose a TV and Leon Speakers soundbar. 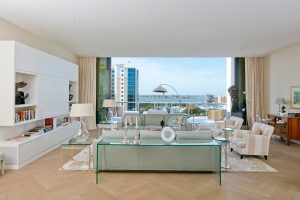 At the other end of the room, a huge bank of glass doors part to open the home to an elegant outdoor entertainment area, complete with automated fountains, firepit, and lighting. In seconds, the interior and exterior merge together. 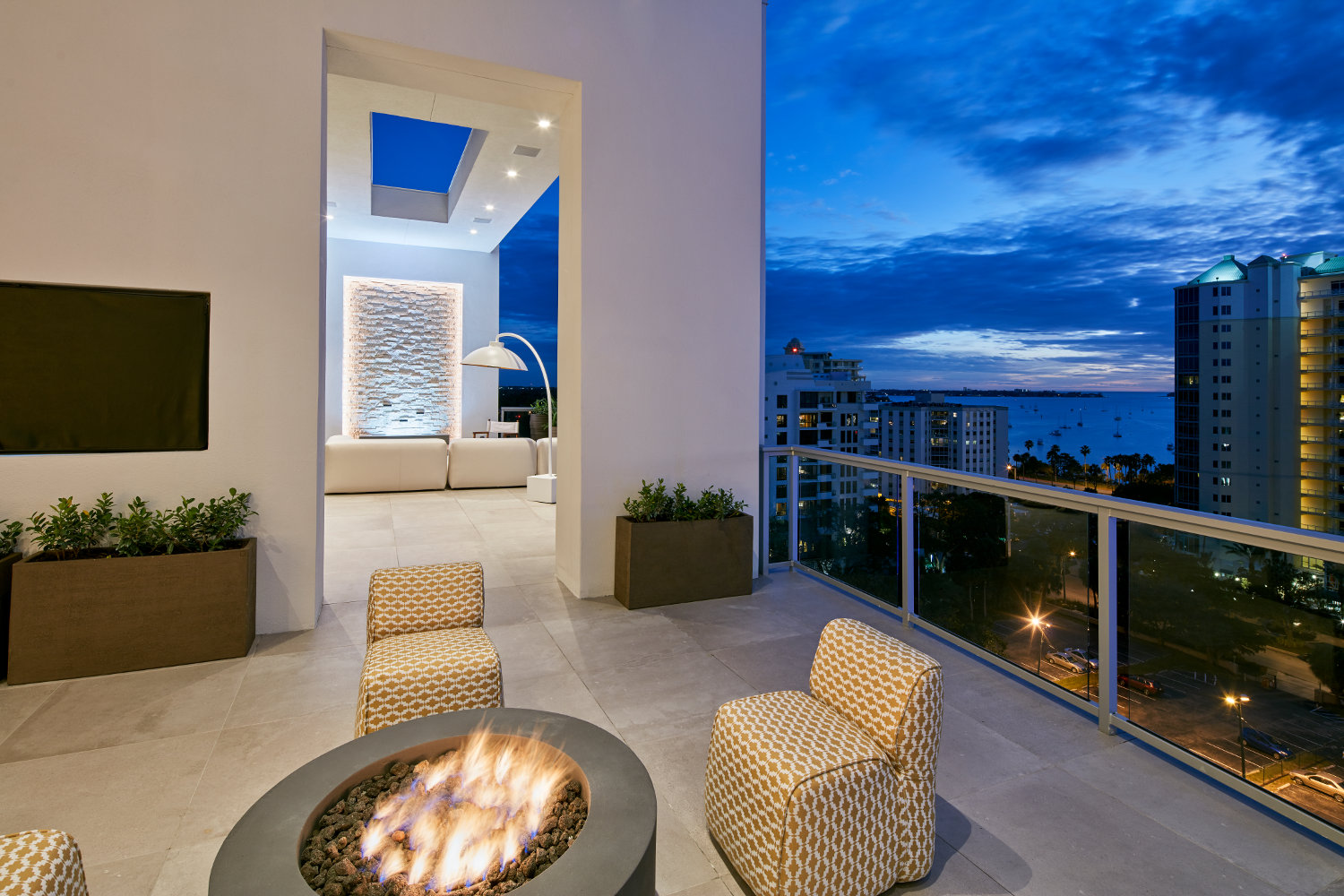 What’s not so “standard” is the homeowners’ eagerness to program the operation of these devices into custom scenes. “It’s one of the reasons we went with a Savant home control system,” Bolduc explains. “Though the Savant app they can create a variety of different scenes that with one tap of a button signal multiple devices adjust, like a morning scene that sets the thermostat, turns on certain lights and disarms the security system. They like the idea of being able to devise their own scenes without having to call our technicians to do it for them.” 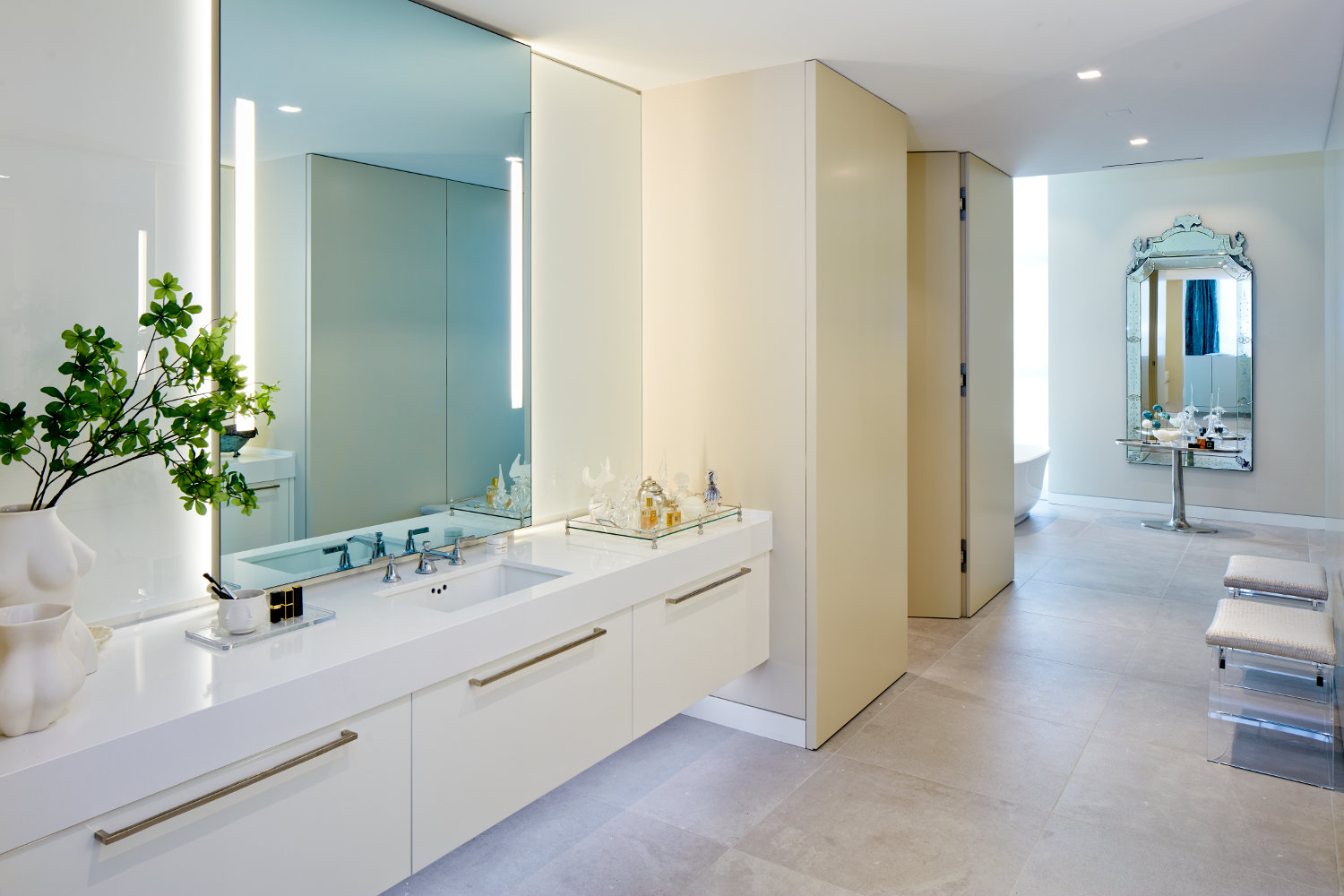 As important as the impressive motorization and self-configurable automation to the homeowners was that the technologies leave a small footprint on the home design. For example, “they were keen on having the speakers of their whole-house audio system match the square, four-inch apertures of their recessed lighting,” Bolduc says. Wicked Smart Homes satisfied this request by installing Sonance Architectural Discreet Opening System speakers and subwoofers throughout the penthouse.

For the master bathroom, Bolduc suggested mirror TVs from Seura. Built within the mirrors, the TVs can only be seen when turned on. Lighting is built into the mirrors too, which can be dimmed and brightened via the Savant app.

All other lights in the home are controlled by the Savant app, too, but with the added convenience of quick, pushbutton operation from Lutron Palladiom keypads. Sporting a sophisticated, minimalist style, the keypads befit the modern aesthetic of the residence. Each room has a Palladiom keypad, which the owners can also use to open and close Lutron window shades.

The Savant system and its connected devices have become such a natural extension of the home that the owners are looking to integrate additional technologies. Top on their list is Amazon Alexa, which will give them the power to engage scenes and other commands via voice commands. Bolduc is on board with the idea, so hands-free home control is definitely in the cards for this Sarasota smart house.