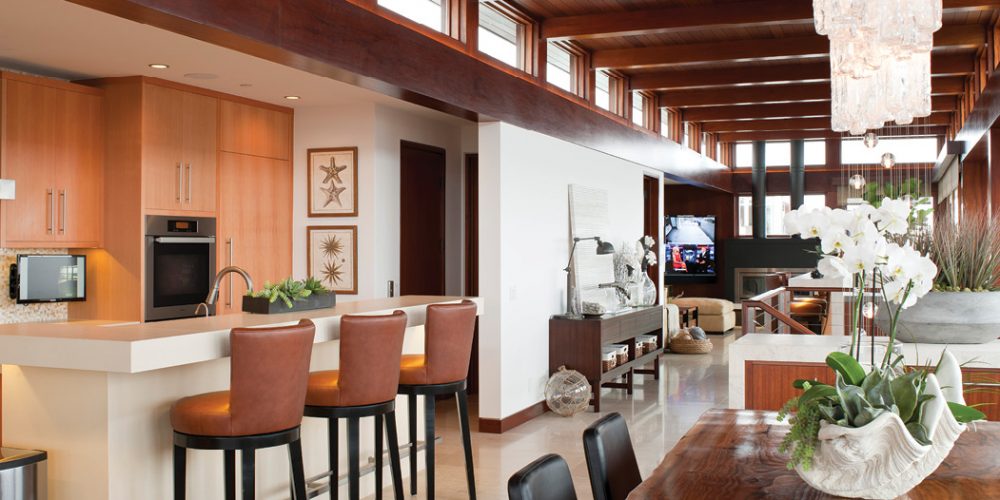 BUILDING A HOME that will suit the tastes of three generations is a tough enough challenge. Throw in an automation system, and pleasing everyone may seem like a lost cause. Fortunately, the mother, daughter and grandmother who would share this newly constructed 4,000-square-foot home in Manhattan Beach, Calif., were all big fans of Apple products. It was this shared affinity of a particular brand that would ultimately shape the direction of the project.

“When we heard they were Mac people, we naturally suggested that they use a Savant system as their automation platform,” says custom electronics (CE) professional Kirk Attoian, CEO of Interior Technologies, El Segundo, Calif. Managed and controlled by the Savant system would be the home’s Lutron light switches and motorized draperies, Aprilaire heating and cooling equipment, GE Networx alarm system, Wirepath surveillance cameras, as well as a host of audio and video components.

Thanks to the Savant system’s Apple friendliness, the controls for every bit of this technology can be accessed from the screen of the owners’ existing iPhones and iPads, as well as from the iMac computers that Interior Technologies set up in each bedroom.

Although this California home is automated to the hilt, it looks remarkably low-tech. Instead of interacting with the Savant automation system via traditional wall-mounted touchpanels, the owners are able to use their iPads. Content from iMacs, which were installed in each bedroom, can be distributed to the 80-inch screen in the great room, or to any other TV in the house. Savant’s innovative Video Tiling System enables four programs to be displayed on the screen simultaneously.

Consolidating all of these controls could have equated to an unruly number of buttons and commands to hunt through just to do something simple like activate the whole-house music system. To minimize time and energy spent scrolling, swiping and searching for the appropriate commands, Interior Technologies designed a graphic user interface (GUI) to present only the most important buttons on the owners’ iPads and other iDevices. “We gave them a few custom ‘dashboards,’” explains Interior Technologies’ Troy Bolotnick. “One of these dashboards shows the eight most popular lighting commands and a button that signals a whole-house audio system to pipe their favorite music to the two most frequented rooms of the house.” Another dashboard that pops up occasionally—like when someone presses the button on the Holovision intercom station at the front door—is an image of the visitor captured by a surveillance camera. From any iDevice the homeowners can converse with the guest and unlock the door.

In addition to facilitating these and other global, housewide types of control, the iDevices can focus on the control of components within specific rooms. For example, while in her bedroom Mom can use her tablet to open and close motorized Lutron Sivoia draperies; extend and swivel a motorized TV mount so that the 46-inch Samsung TV can be viewed easily from either the bed or from the office area; and cue music from a central rack of equipment to the frameless Revel speakers mounted in the ceiling and finished to blend in with the wooden tongue-and-groove ceiling panels. Also in the room to help out is a Savant SSR handheld remote and Lutron keypad. The remote lets Mom quickly activate the gas fireplace and select what she would like to watch on TV. A wall-mounted keypad, meanwhile, offers quick and easy adjustments of the room lights—where one button turns on certain fixtures when she enters and another shuts everything off when she leaves.

While it’s nice to have your own special controls for your own special room, the ladies of this beach home usually prefer to convene in the great room to watch movies and sporting events. Here, an 80-inch Sharp LED TV and 5.1-channel surround-sound system are ready to play a plethora of content. Tucked neatly into an equipment rack inside a closet are three DirecTV receivers, a Blu-ray player (another player that’s stashed inside the closet of Grandma’s bedroom is also accessible), a security camera DVR, Savant music server, AppleTV, and Integra surround-sound receiver. To broaden their entertainment options, the Apple TV can pull content from the owners’ iMacs, and the Savant music server can grab music from their iTunes accounts.

For Interior Technologies, installing a system that can push such a full range of entertainment to this room’s TV and speakers, as well as to all other TVs and speakers in the house, is a fairly common practice. What really makes the great room’s A/V system extraordinary is the 80-incher’s ability to present four programs at once. A multi-view setup had been in the plans from the beginning, says Bolotnick, and initially he and his team were going to install one large screen flanked by three smaller units. But when Savant released its innovative SmartView Video Tiling system midway through the project, the plan shifted from four TVs to just one. SmartView basically divides the TV screen into four quadrants, each of which can display a different program, which in this residence is typically a variety of sports broadcasts. The size of the quadrants and their position on the TV screen can be altered via an iPad by pinching, swiping and expanding an exact replica of the TV screen layout. “This has been a big hit with the homeowners and exemplifies the power of Savant,” Attoian says.

What could have been a very complicated and confusing process of controlling a very sophisticated video system, not to mention a bevy of electronic devices throughout the house, was simplified significantly through the integration of an automation system. Savant’s Mac-based operating platform streamlined the learning curve of a family of avid Apple users, both young and old.