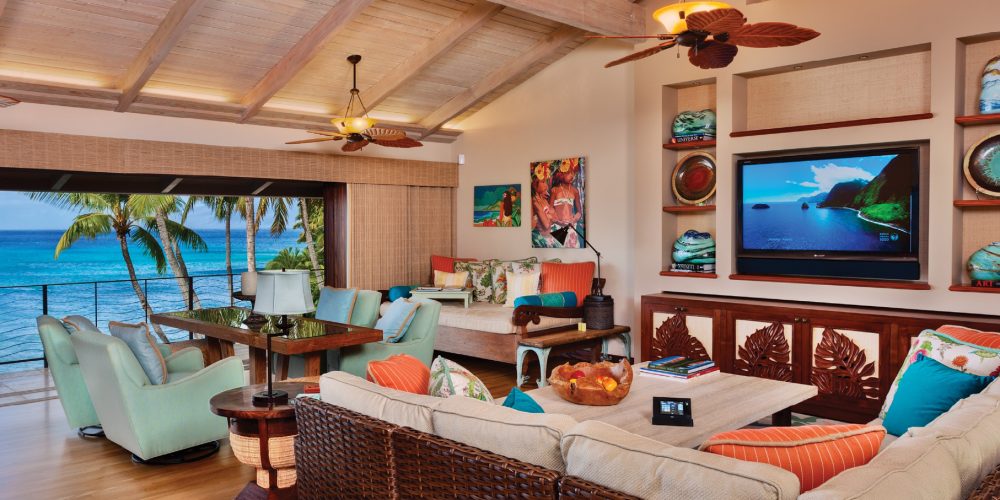 IT ALL STARTED WITH the installation of a simple light switch. That was all the owners of this 4,200-square-foot Maui vacation home requested of the custom electronics (CE) professionals at Art and Automation, Wailuku, Hawaii, during the remodel of their master bathroom. “They were just looking for a convenient way to be able to control the bathroom lights from a jetted bathtub,” says Art and Automation president Mike Ruger.

“Electrical code prohibits putting high-voltage switches near water, so the architect called us, very apologetically, to install a low-voltage keypad within arm’s reach of the tub. It was such a small project compared to the ones we usually do, that he felt silly calling us to do the job.”

But as Ruger’s team knew from experience, a minor update like this can often snowball into something much larger and grander. They gladly accepted the job and made the trip to the house with a Lutron SeeTouch keypad in tow. After installing and programming the five-button keypad, Ruger struck up a conversation with the homeowners about some of the other options available, such as expanding the Lutron HomeWorks lighting control system into other rooms of the house. “The wheels started turning and soon we were automating every light, setting up a distributed audio system, adding a couple of home theaters, interfacing with a security system, adding a number of high-end surveillance cameras, and controlling a new HVAC system … the works. This one little keypad kicked off a project that would continue to evolve over the next four years,” says Ruger.

Over the course of the system design, the Art and Automation team learned all it could about the family: How much time they planned to spend at the house, common activities during their stay, what they enjoyed most about their vacations, and so on. This information cultivated a system that would prove a useful tool for preparing the house for their arrival, making their stay as comfortable and enjoyable as possible and allowing them to monitor the property when they were at their permanent residence on the mainland.

“Everything boiled down to convenience,” says Ruger. “The owners wanted to be able to walk into the house, press one button and have the lights, music, ceiling fans, and security system adjust to their liking.” Lutron keypads peppered throughout the house, as well as several AMX touchpanels, handheld remotes and AMX apps on mobile phones and tablets, put all the controls at the family’s fingertips. For example, from a touchpanel in the detached garage, the family can touch an icon to trigger a pathway of lights through the yard to the main entrance of the house. Once they are inside, touching an icon displayed on another touchpanel can turn off all of the lights. And if they forget to touch the icon, the AMX automation system deactivates the lights automatically after five minutes.

Ã¯:¿:¼The exterior of the house is just as smart as the inside. Clockwise: a doorbell with integrated surveillance camera and keyless entry; AMX controllable gas tiki torches, colored LED lighting, whale-watching cameras and speakers in the lanai; more surveillance cameras by a side entry and dimmable sconces.

To hear music anywhere in the house, they can press a button to activate the Niles distributed audio system and then choose a song play through the home’s built-in Sonance speakers. Video, HVAC and other subsystems are controlled in a similar manner. An AMX NetLinx home automation processor passes commands from the touchpanels and other controllers to the appropriate electronic devices, and through software programmed by Ruger, also executes several “scenes” that simplify the process or preparing the house for a party, bedtime and the family’s departure. As part of an outdoor party scene, for example, gas tiki torches activate, music plays through several Sonance speakers and colored LED lights tucked around the perimeter of the swimming pool spring to life.

The bathroom that got the entire automation project rolling, specifically the addition of a Lutron keypad by the jetted tub. Other features include speakers tied to a whole-house music system and a remote controllable fountain. (Below) Other Lutron keypads are sprinkled throughout the residence, designed to match the wall surface.

Although the one-button scene-setting is impressive, it’s the way in which the touchpanels are used for tasks other than control that sends this home’s wow factor off the charts. Views of migrating whales and sunbathing turtles can be viewed in high-def color on the screen of any touchpanel, as well as on the screens of mobile phones when the family is thousands of miles away. The AMX system was engineered by Art and Automation to view two high-definition Axis IP cameras—one that’s aimed at a beach frequented by dozens of turtles, and the other at the ocean. By navigating the icons on the screen of a panel or PC, the owners can engage the 20x optical zoom for a closer look, often catching a glimpse of a whale. The cameras can each be panned and tilted, or adjusted to one of five different preset positions so they can check out the entire beach and backyard. The remaining cameras around the house are fixed and used mainly for security monitoring. The ability to access these cameras remotely was particularly handy during the renovation of the house, says Ruger. “The family could see what was happening at the job site from start to finish without having to physically be there.”

When a touchpanel isn’t being used to whale watch or to operate the home’s electronic systems, it can function as an intercom. An intercom station at the entry gate with a built-in camera and microphone communicates with the touchpanels inside, allowing the family see and speak with a visitor before welcoming him or her inside.

Ã¯:¿:¼A panoramic-style AMX touchpanel presents information about the systems of the house and lets the homeowners control them with a few taps of a finger. (Below) The dimming smarts for the home’s Lutron lighting system are hidden behind decorative wall panels.

No matter who happens to be visiting, entertainment is bound to be in high demand. Competing with the natural beauty of Maui’s coastline, several Samsung and Sharp flat-panel TVs beg to be enjoyed, although there’s nary a cable box, Blu-ray disc player or game console in sight. Art and Automation neatly racked these components inside custom-made Balienese cabinetry. (The Lutron lighting equipment, meanwhile, was hidden behind decorative sliding panels in the home office.)

Even though the A/V equipment sits behind closed cabinet doors, commands from any of the various controls used throughout the house get through loud and clear. Art and Automation also made sure that the transition between music listening and video watching would be smooth. “You can just pop your phone into one of the iPort docking stations and hit play to hear your music through the in-ceiling speakers,” Ruger explains. When the family wants to enjoy a movie, these same speakers switch automatically from stereo to surround-sound as soon as the home theater receiver is activated.

Outfitted with multi-tasking touchpanels, decorative keypads, in-ceiling speakers and a robust automation system, it’s hard to believe that this home’s owners had only a basic keypad on their technology to-do list when remodeling their vacation home four years ago. As is common with many remodeling projects, that addition blossomed into the design and installation of a full-blown automation system, with plenty of bells and whistles, to boot. The tech has become an integral part of the family’s time spent at the vacation home through simple, intuitive controls that make it easy to relax, unwind and enjoy the view—all via an AMX touchpanel.