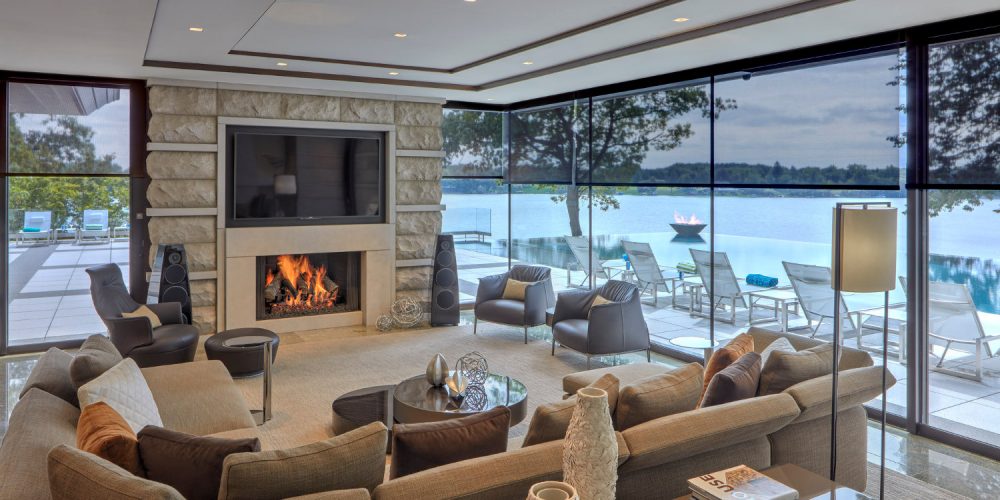 Blessed with beautiful views of an inland lake, you better believe the owners of this home made sure to install massive windows — and lots of them. In fact, the majority of the lake-facing side of the house features wall-to-wall glass. As stunning as these sensational fenestrations might be, though, they do pose a few problems. Sunlight can fade furnishings and throw a glare onto TV screens. There’s also the heat generated by the incoming sunlight to combat. Lastly, unclad windows preserve none of an occupants’ privacy. Those windows needed some TLC. 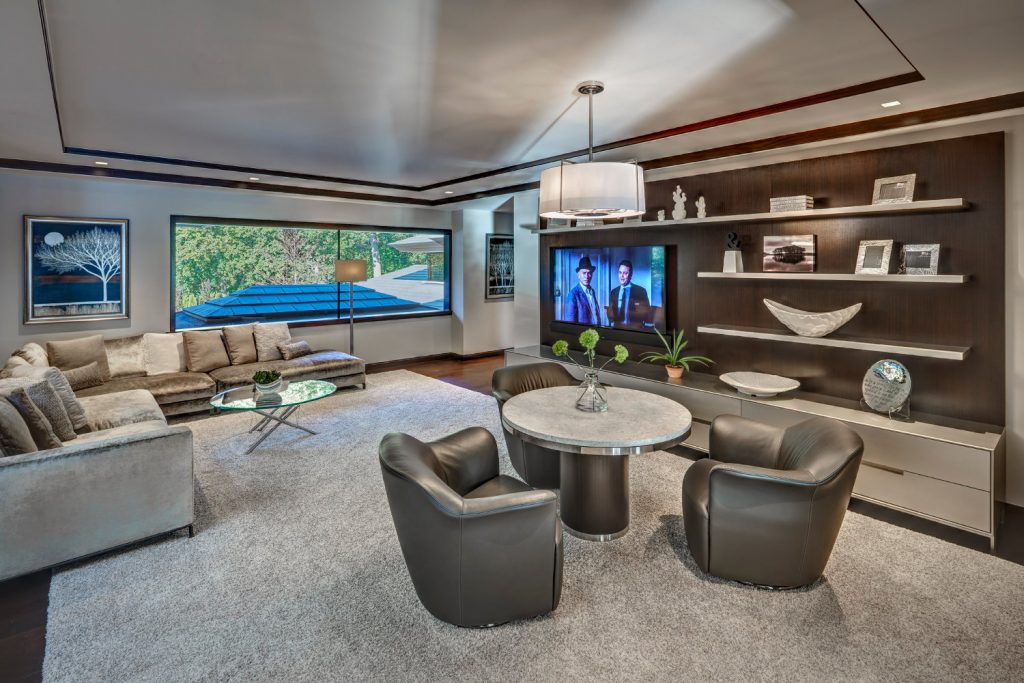 Thankfully, when the owners began designing plans for their new 15,000-square-foot home, they contacted the team at Spire Integrated Systems, of Traverse City, Mich. to add a few high-tech systems to handle the harsh afternoon sunshine. It was a project that earned the Electronic House Home of the Year Award for Best Smart Contemporary Smart Home, $150,000 and Up.

“When we first started working with the homeowners, our initial goal was to prewire it to the hilt and install a Lutron architectural lighting and shading system,” says Navot Shoresh, president of Spire. “Sunlight would affect a lot of the house, so these two technologies would be extremely beneficial to the homeowners; and, based on our years of experience, we expected that as the project progressed the owners would likely ask us to install other types systems.”

Shoresh’s hunch was spot on. Within a few weeks, plans for the smart home project grew to include a full-blown Savant automation system that spreads audio and video content to speakers and TVs housewide and controls a security system and surveillance cameras, motorized entry gate, numerous water features, motorized TV lifts — and, of course, the 256 lights and nearly 60 motorized shades.

The evolution of integrated systems made Savant an ideal choice for the job, which took two years to complete. “It would allow the owners themselves to create routines for the systems to follow, which makes them feel more empowered and not like hostages in their own home,” Shoresh explains. “It completely removed any trepidation of the technology.” Of course, he and his team configured the system fully for the family, with several customized scenes and automated scenarios for the ultimate in ease and simplicity. 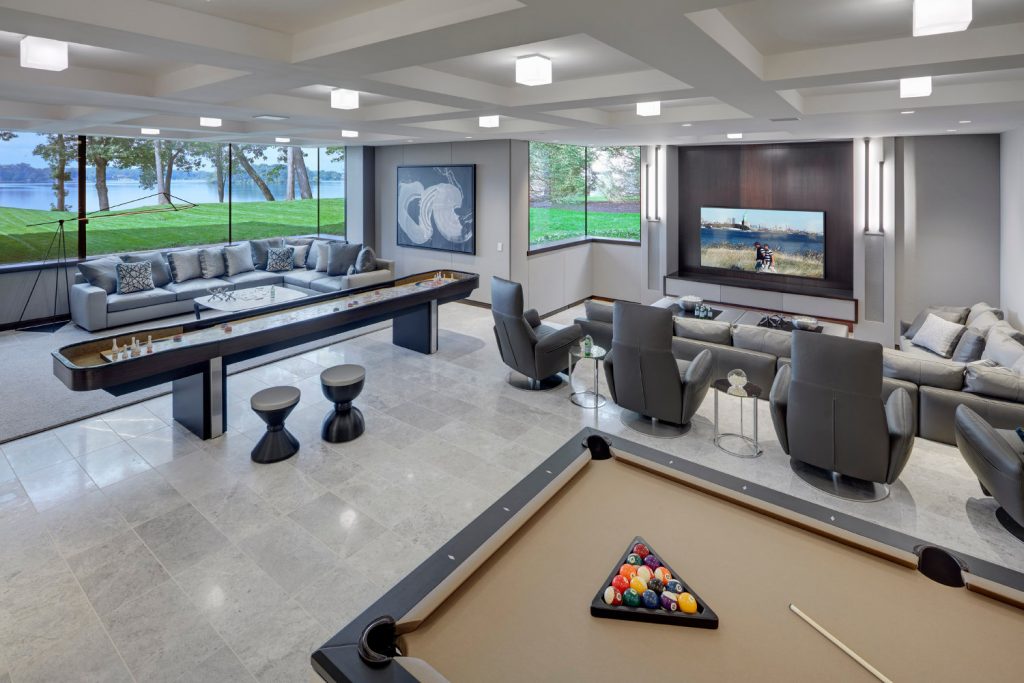 For example, lights inside and outside the home activate automatically based on the time of day and the occupancy. Shades lift up and down in sync with sunrise and sunset. Again, because maintaining a view was of the upmost importance, Spire programmed the shades to descend only halfway down the windows. “This would shade the interior of the house, yet still give the owners an unobstructed view outside,” Shoresh says.

Putting these systems on auto pilot saves the owners from the tedium of manual adjustments, but they find the Savant app on their mobile devices to be just has helpful. With a quick tap and swipe on the screen, they can access, monitor, and operate every Savant-connected device in the house, from the couch, the backyard, bedroom, or thousands of miles from home.

Entertainment was a natural complement to the lighting and shading systems, turning the home into the perfect place to entertain friends and family or to simply relax and unwind with music and a movie. Spire packed the house with plenty of options. Tucked neatly inside an equipment closet are cable boxes, Apple TV, and an Autonomic media server that streams music from Pandora, Tidal, and other online services to 26 listening zones equipped with a variety of Sonance interior and exterior speakers, plus a pair of Meridian floorstanding units in the living room for a two-channel stereo effect.

The Meridian duo is accompanied by a 70-inch Sony TV — just one of many. With TVs of this size, it’s easy for the technology to become the visual focal point. Rather than let that happen, the owners, architect and Spire team collaborated on a unique solution that completely removes at least a couple TVs from the spotlight.

“In order to maintain the views, we placed a 65-inch TV in the kitchen and a 36-inch TV in the master bedroom on motorized lifts that raise the displays from the floor and into viewing position,” Shoresh explains. “It was one of the most challenging parts of the project as we had to build a space below the floor to house each TV, move a slice of granite from the floor to allow the TV to pass, and then move that piece of granite back into positon to fit flush with the rest of the floor.”

The disappearing TV act was a success. Stowing them below the floor, the windows remain the main eye candy. Should the owners want to watch a show from their bed or catch the news while sipping coffee in the morning, they simply go to the Savant app on their iPad or iPhone, and command the Future Automation lifts to bring the TVs up into perfect viewing position. They go back into their hiding spots just as easily when the show is over.

This same lift-and-lower technique was applied to the shelving unit in the rec room. Except with this setup, the shelves, which hold liquor for the bar, rise from a locked cabinet below when the owner presses his thumb to a biometric reader. ”It’s a great way to keep a party from getting out of hand,” Shoresh says.

The motorized TVs and bar shelves are slick in design but still serve very practical purposes, just like every other smart system in this lake house. “We really focused on what made sense for the home and family and didn’t spend time or money on things that probably wouldn’t get used,” Shoresh remarks.

For example, two Meridian speakers instead of a full surround-sound setup suffice in the living room, and in-wall speakers were installed only in rooms where music listening would definitely happen — not throughout the entire house. Money and technology was invested in parts of the home deemed extremely important, like shading for the windows and scenery-saving TVs.