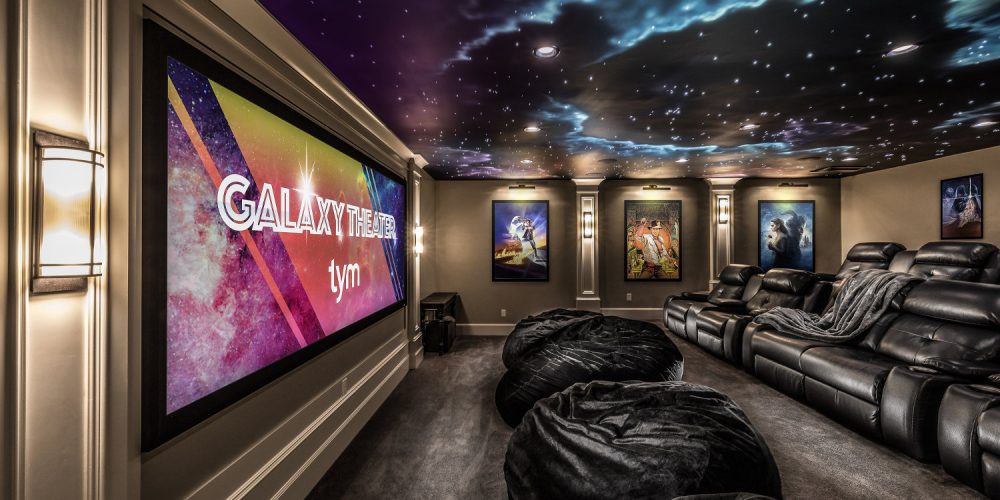 If there’s one room where customers can let their imagination run wild, it’s in a home theater. The owner of this award-winning home theater let his personality and heritage reflect in the design by incorporating decorative pieces made of steel. Owner of a steel factory, he put his creativity to work by using materials at his mill to fashion his own theater sign and film reels, which will eventually don the walls of the space that earned the Electronic House Gold Award for Best Home Theater, $25,000 to $75,000.

But first things first: This A/V enthusiast hooked up with Tym Smart Homes & Home Theaters to turn an unused portion of his basement into a theater that his entire family could enjoy. “He visited our showroom and we tossed around a few fun ideas and wondered if we would hear back from him,” relates Matt Montgomery, co-founder of Tym, of his initial conversation with the homeowner. That was more than a year ago. Eventually, the owner made it back to the Tym showroom; this time he was ready to commence with the project. 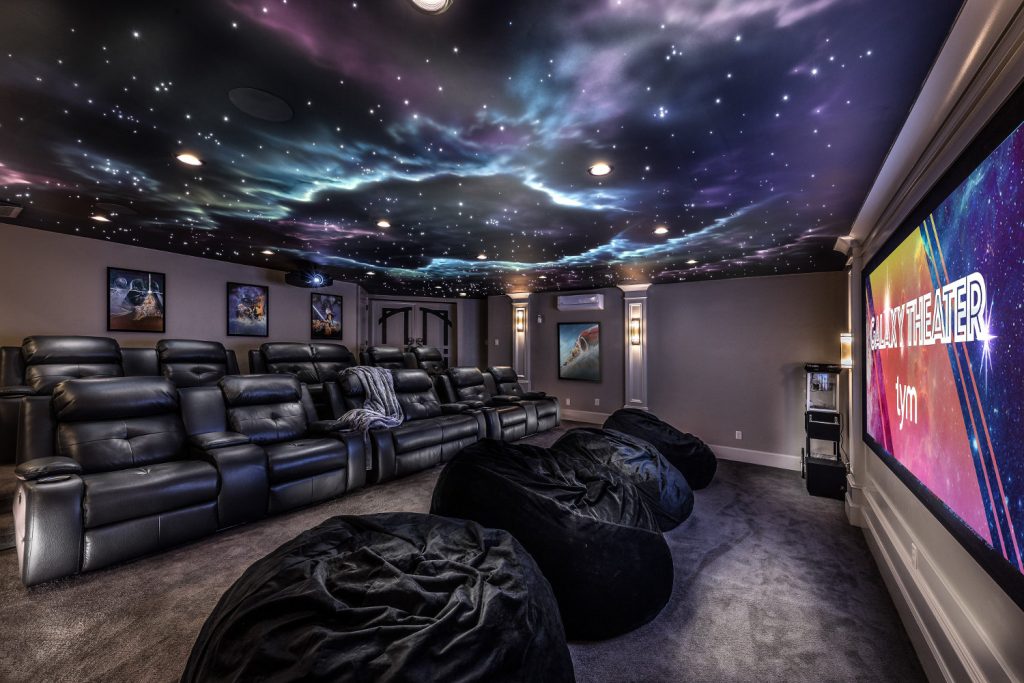 Out of the gate, Tym’s signature star ceiling, which is prominently displayed at its showroom, struck the homeowner as a must-have for the home theater. Beyond this, a large screen, lots of comfortable seating, and a casual vibe were at the top of the shopping list. While Tym’s star ceiling expert, Brad Montgomery, laid the groundwork for the galaxy overhead, the rest of the team focused on the design and implementation of the A/V gear.

The area of the basement that the owner had saved for a home theater was completely finished, so Tym was able to pull together the project fairly quickly, affixing a 138-inch acoustically transparent screen from Elite Prime Vision to the front wall. Optimized for displaying 4K content, the screen was paired with a Sony 4K projector, which Tym suspended from the 10-foot ceiling. 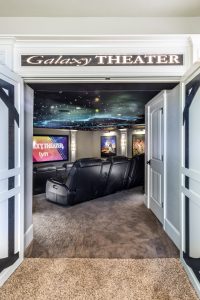 A Dolby Atmos receiver from Anthem runs the audio, delivering a realistic, three-dimensional listening experience through 11 Paradigm speakers and two Paradigm subwoofers — all of which Tym recessed into the walls and ceiling. Brad Montgomery meshed the ceiling speakers into the design of the star ceiling by painting their grilles and painstakingly hand-threading five miles of fiber-optic cabling into the sheetrock.

Selecting a control system for the space was a no-brainer, as the family was already using a Savant system to access, control, and distribute audio and video throughout the house. Tym simply downloaded the Savant app on a tablet dedicated to the new home theater and the family was mastering their media in no time. The new A/V equipment was also tied into the housewide Savant distribution system, which enables the family to route content from the theater to other media rooms upstairs and vice-versa to the theater downstairs. “Everything can be shared,” Matt Montgomery says.

Through the app, they can activate a Sony Blu-ray player, cable TV box, or Apple TV, plus command the Savant Metropolitan light switches to darken the room for optimum viewing. The fiber-optic ceiling is controlled through the app, too, and it’s created an unforeseen use of the theater.

“The owner shared with us that while he and his family do use the theater almost every night to watch movies — and he and his wife regularly visit the theater to just sit and relax and enjoy the stars,” Montgomery says. The steel décor that will soon be added will give the theater even more to gaze upon, and greater personality and polish.