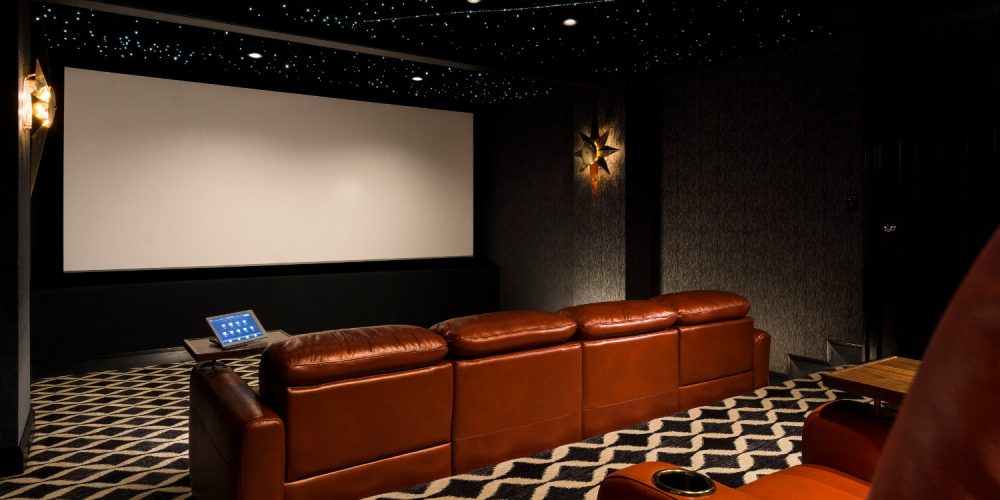 Most people sit in their home theaters to get away from it all — to escape reality and be swept away by the sights and sounds of a fantastic audio/visual presentation. The owner of this impressive space, which was recently named the Electronic House Gold Winner for Best Home Theater $150,000 and more, certainly uses his new 17-by-24-foot home cinema to get away from it all and enjoy films casually with friends and family. It would be impossible not to, given the room’s range of top-notch A/V equipment and sophisticated interior.

But there was another very important reason that the owner decided to convert the previous owner’s mediocre media room into a stellar home cinema. “He is one of the movie industry’s top executives so he needed to be able to view not just new releases but first-run movies sent directly to him from the studio,” says Murray Kunis, founder and president of Future Home, Los Angeles. For this reason, Future Home installed a combination of equipment that could handle both widely available consumer movie formats and fresh-from-the-studio DCI formats.

But first things first: The room chosen to function as the theater would need a serious structural overhaul. With a ceiling measuring just over 7 feet tall, the existing seating platform was removed the front half of the room was ripped up and 14 inches concrete slab were removed. This would provide ample space for stadium-style seating, a huge screen and 27 speakers.

There would be plenty of headroom to mount a standard projector to the ceiling, but again, this is no ordinary home theater. In order to view first-run movies from the studio, the owner needed a professional-grade projector. Much larger and generating more heat than consumer-grade counterparts, it had to be installed outside of the theater, in a well-ventilated room of its own. “Fortunately, a laundry room located behind the theater afforded an acceptable location,” Kunis says.

Once the size and shape of the room had been adequately adjusted, Kunis brought CinemaTech on board to design and install the interior accouterments, including 10 motorized leather seats, custom fiber-optic star ceiling and plenty of acoustical treatments. Although the theater’s 27 speakers comprising a Dolby Atmos system envelop movie-goers in three-dimensional audio, Future Home and CinemaTech went the extra mile by applying acoustical treatments to optimize the clarity and localization of the surround effects. The treatments, including Kinetics Noise Control isolators, also block out noise from outside the theater. The overall room design and speaker placement was critical because Dolby’s professional department had to give the green light before the commercial-grade DCI Atmos processor would be activated. 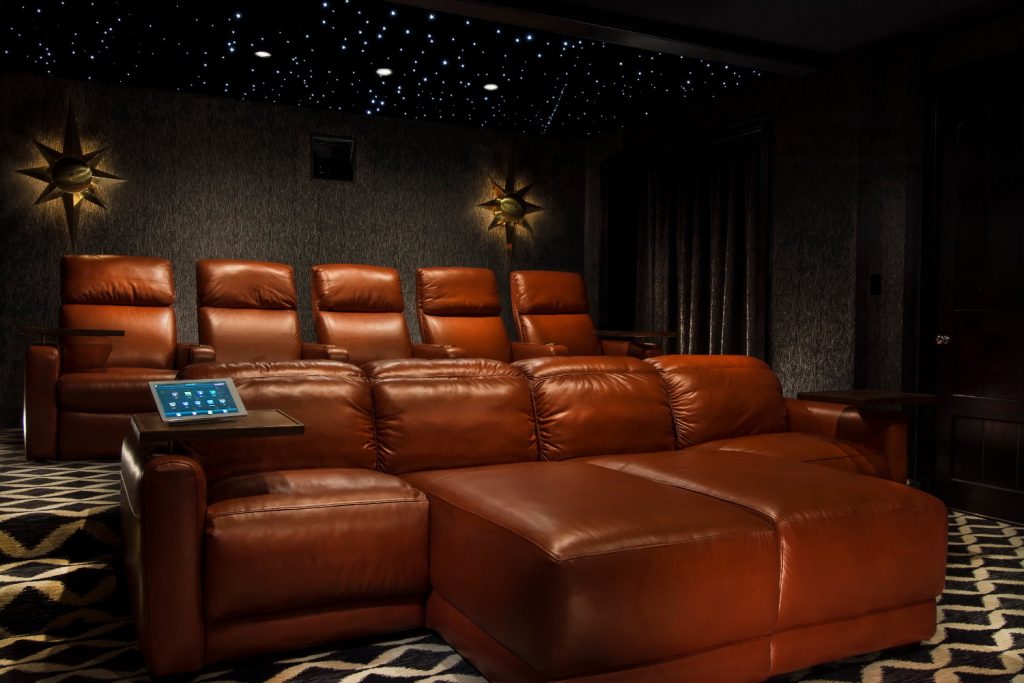 A Crestron CP3 control system runs the show, consolidating each element of the theater to a single button press. From a Crestron touchpanel the owner can view every movie available on every piece of equipment, including the DCI server that delivers movies from the studio. “Historically, a user would have to go directly to the server to access choose a movie, but in this theater the owner can simply enter a selection from the comfort of his theater chair,” Kunis says.

The touchpanel also operates the Crestron dimmer switches, star ceiling and thermostat. With minimal effort he can adjust the room environment to suit the occasion. In addition to using the room solo for critical movie analysis, the space gets used several times a week for more family enjoyment, says Kunis. “One night a week is dedicated as kids’ night, and other night is parents’ night. We’re very proud that this room has provided so much enjoyment to someone responsible for so many Hollywood hit movies.”