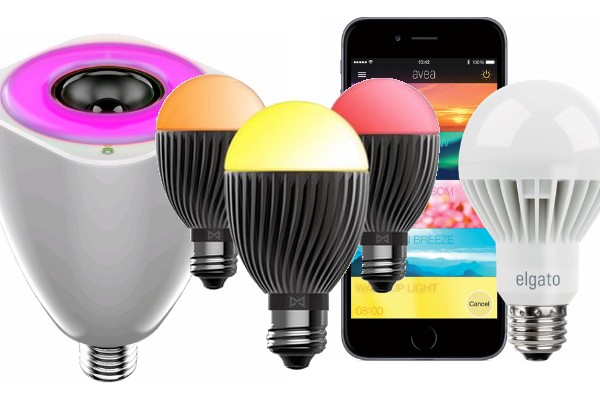 When Philips launched the original Hue smart light bulbs, they were revolutionary products for several reasons. First, they were LED bulbs at a time when LED was a new thing. Second, they were one of the first smartphone controlled lights for DIY users. Finally, and most importantly, they changed colors. That was the cool part. Not only could you flick the lights on and off by tapping an iPhone screen, but you could also make the light shine almost any color you wanted. The fact the app allowed for easy customization of colors and a few other fun tweaks made the Philips Hue a fast hit with smart home enthusiasts and newbies alike.

Philips Hue lights are still considered the premium product among smart lights, but no longer is the brand alone in that market. It seems nearly every week we receive a press release about new app-controlled LED light bulbs that can change color.

So are all these other color-changing bulbs mere copycats or do they offer something different and useful to the smart bulb buying public? Well, that depends. Most of the non-Hue color-changing LED blubs use Bluetooth as the wireless control method. Philips Hue lights use a combination of WiFi and Zigbee. In a Philips Hue system (read our complete Philips Hue review here), you first need to install a gateway product to your home network. The gateway connects wirelessly with Zigbee to your Hue lights. The Hue app on your smartphone connects to the gateway via WiFi. In that setup, technically, the smartphone isn’t directly connected to the lights.

Most of the Hue-copycats (and I mean that in the kindest possibly way) use Bluetooth, rather than WiFi and Zigbee. With a Bluetooth connection, the phone is wirelessly connected directly to the light bulbs, no network gateway required. A Bluetooth connection is a little easier to setup, and since there’s no gateway, you’re not dependent on your home network and don’t need to take up another Ethernet port on your router or switch. On the other hand, Bluetooth connections in the home have a very limited range. While 30 feet is the standard stated range, usually if you leave the room and walk down the hall a little, you’ve lost the connection. In fact, with some Bluetooth lights I’ve used, if the light loses the Bluetooth signal the bulb automatically returns to white from whatever color it was previously on.

A major selling point with some of the Bluetooth color-changing smart bulbs is they’re cheaper than Philips Hue bulbs. A Hue starter kit (gateway + 3 bulbs) costs $200, and additional bulbs are $60. Some of the Bluetooth bulbs here cost less than $30, but most are in the $40-$50 range.

Another benefit of Hue lights over any of the Bluetooth lights is their ability to be integrated into smart home or control systems. Several professional home automation systems, such as Control4, can control Philips Hue. DIY systems like SmartThings are also able to operate Hue lights. That’s not the case for the various Bluetooth lights shown here. For that reason it’s unlikely that you’d want to use Bluetooth lights as the basis for a whole-home smart lighting system, but they’re nice for a special effect in a room or two.

Take a look at these Philips Hue alternatives for color-changing smart lights:

The Lümen Bluetooth Smart Bulb can deliver white light, as well as 16 million colors. Party Mode creates flashing lights that change color to match whatever music is coming out of your smartphone or tablet. If the idea of strobe effects is giving you a headache, click on the Relaxation Mode, which can mimic moonlight by transitioning between a calming blue and a peaceful purple. Other modes include Romantic, Wake-Up, Music Sync, and Call Alert, with more expected in the near future. Each LÃƒ:¼men uses a 7-watt LED element (40W equivalent). Multiple lights can be grouped.
$59.99 each.

The StriimLIGHT (pronounced stream light) Color is different as it’s a smart bulb that doubles as an audio speaker to stream music from your phone. It comes in WiFi and Bluetooth versions and supports MP3, AAC, WAV, PCM, FLAC, as well as web radio. This smart bulb is also compatible with the free AwoX SmartCOLOR Control app, so you can control lighting and color features from your favorite smartphone or tablet. The StriimLIGHT Color (Bluetooth) costs $99.99. The StriimLIGHT Color WiFi is priced at $149.99 each.

The Elgato Avea uses iOS devices and Bluetooth as its main method of control (Sorry Android users). With one tap, you can enable some fancy-sounding preset scenes, such as Calm Provence, Cherry Blossom, Fairy Woods, Wake-Up Light, Magic Hour, and more. Elgato makes mood lighting easy, since there’s something here to help you wake up, unwind, party, and do pretty much everything else you’d want to do with automated colored smart bulbs.The 7-watt LED smart bulb also features 430 lumens and is rated for 25,000 hours of use. (Philips Hue bulbs are 7.5 watt.) The Elgato Avea is selling now, priced at $39.99 each.

Misfit says that the way Bolt LED bulb is constructed makes it pretty special. It’s a glass dome with a proprietary light-diffusion coating, which allows it to deliver 260-degree light dispersion with no hot spots. It connects to a smart phone or tablet via Bluetooth and can be controlled via the Misfit iOS and/or Android app, as well as the Misfit Flash and Logitech’s Harmony Home remote and app. A new Misfit Home app is also coming soon.The Misfit Bolt is now available for pre-order, priced at $49.99 each or $129.99 for the three-pack.

The app for the Flux Bluetooth smart LED bulb has 20 pre-programmed color modes and the option to control up to 50 Flux smart LED light bulbs together as a group or individually. Each of these smart LED light bulbs consumes about 7 watts of power, but boasts the equivalent of a 40-watt incandescent bulb. The bulb has also been rated for 20,000 hours of use. Other features include a timer option for a bright (and colorful!) daily wake-up call and a music sync feature, so you can have the light change to match your music. The bulb also has a built-in memory feature that can remember the last color or program mode used. Flux smart LED light bulbs are available now, priced at $29.75 each.