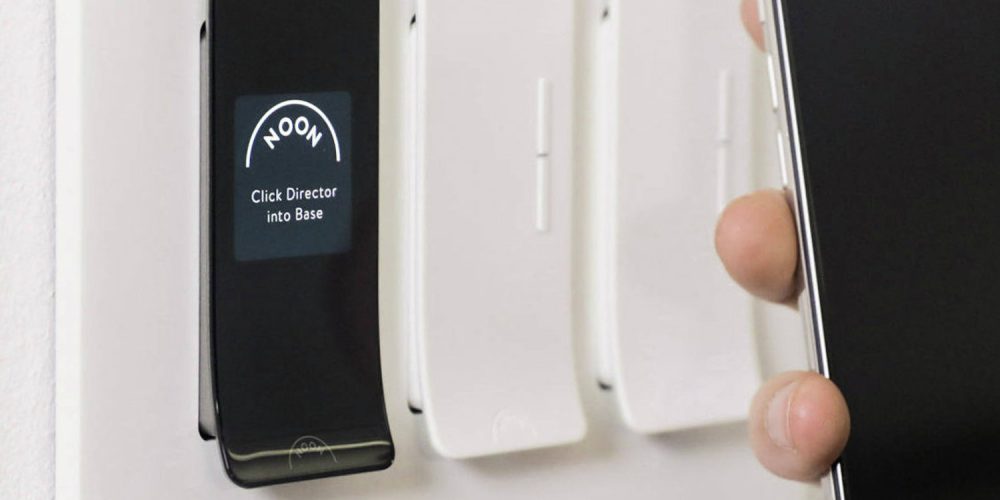 Inside the Noon Home dimming base unit, an algorithm can identify the low-level current wave form of the lighting flowing through the switch. That could be an LED, halogen or incandescent bulb in a magnetic low-voltage (MLV) fixture, electronic low-voltage (ELV) fixture, chandelier, recessed light, sconce… anything.

The company, based in Cupertino, Calif., offers light switches that not only look different from any switches integrators have ever seen before, but also include patented “automatic bulb-detection technology” that enables the system to do automated lighting design using advanced algorithms that determine dimming levels by reading the electric current generated by light sources.

Aesthetically, the super-thin switches themselves physically “float” out from the faceplates and instead of aiming to blend into the wall, they are designed to visually stand out. The “switch” itself is a single-gang touchpanel, but the system comes in configurations as large as four-gang.

“There are about 140 million residential light switches sold each year,” says Charlton. “This is a really great market and I thought we could do something really disruptive in terms of delivering a scene-based experience to a much broader market.”

As mentioned, the switches come in single-, double-, triple- and four-gang wall plate configurations, but are also compatible with Decora designs for five-gang or other unusual combinations, such as combination outlets and switches.

Noon Home switches are upgradeable, which means the hardware can be changed out easily.

The switches are controllable via Amazon Alexa, Google Home or IFTTT integration with third-party devices, which also allow Noon switches to work with smart bulbs like Philips Hue, light-effect bulbs, or even music.

The system installs similarly to any wall switch, with a neutral wire required. There is no specialized DC wiring needed.

The wallplates also have a special feature to speed up installation: The metal chassis behind the wallplate allows the technician to hang the dimming base from it while he is connecting the wires. That feature lets the technician keep both hands free.

“The Room Director is the central touchpoint for the user in the room,” says Saket Vora, head of hardware engineering.

“It basically is the scene controller. The Room Director has both Wi-Fi and Bluetooth technology, so it connects over to the home network’s Wi-Fi, which enables remote control through a smartphone app. It also allows us to send notifications.”

The Room Director is paired to the different extension switched over Bluetooth, so the idea is that in any central-switch location you’d like, you put the Room Director.

The unique design also allows the integrator to upgrade or change out hardware easily. There is no external hub…everything is in the switch itself.

“Today, our goal is best-of-breed lighting,” he notes.

Vora says the company’s automatic bulb detection technology is “truly industry-first” using Artificial Intelligence (AI), machine learning, and algorithms based on the profile of the electric current to determine what type of lighting load is connected to the switch.

Inside the dimming base unit, the algorithm can identify the low-level current waveform of the lighting flowing through the switch. That could be an LED, halogen or incandescent bulb in a magnetic low-voltage (MLV) fixture, electronic low-voltage (ELV) fixture, chandelier, recessed light, sconce… anything.

“This allows us to bring a truly universal dimmer to the market, rather than having to look at different catalogs to figure out which is the right dimmer for the lighting load. The intelligence inside the switch is able to do this,” says Vora.

“We are able to exactly dial in the appropriate dimming scheme, the dimming range, and all the other parameters that really help the integrator get the best dimming performance.”

“Based on that, we are able to exactly dial in the appropriate dimming scheme, the dimming range, and all the other parameters that really help the integrator get the best dimming performance out of whatever lighting load he has connected to the switch.”

In other words, looking at the electronic signatures of the lighting loads, the Noon Home switch’s built-in lighting designer knows the switch is connected to four recessed cans, one chandelier, and one accent lamp, for example.

Using that information, it will preconfigure three different scenes for the homeowner: Relaxed Mode, Everyday Mode, and Bright Mode.

Noon has six issued patents, 36 pending and over 170 identified. Several of the company’s patents are focused on bulb identification and control.

“It dials in the different light levels for each of those loads to create that experience,” says Vora. Using a smartphone, the homeowner can reconfigure and modify it if desired, and create new experiences, such as Movie Night Mode.

“Lighting control is great for someone who wants to try to install a smart switch or two, but most of these lighting experiences require at least seven switches, or dozens of switches, to deliver the right experience,” suggests Charlton. “There is only one in a handful of people out there who wants to take on that kind of project. We highly encourage homeowners to use a professional, and I think that’s the right path for most people.”