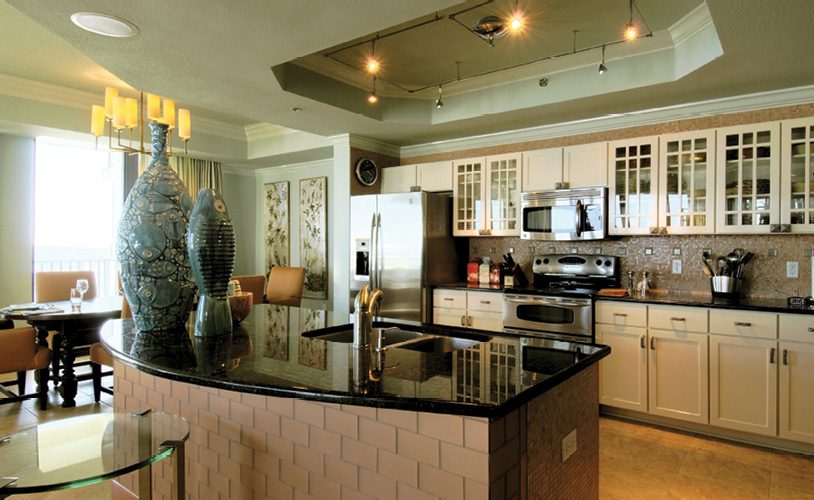 If you think residential lighting control is only for the rich and famous, it’s time to refresh your view. “Simple, affordable, reliable” is how David Weinstein, vice president of residential sales at Lutron, characterizes the changes in the U.S. lighting control market over the past five years. What was once a custom product category catering to the top one percent of the population has widened to a broad spectrum of wired and wireless offerings ranging from do-it-yourself lighting kits to professionally installed solutions.

Broader, Budget-Friendly Appeal
A look at Lutron’s product path over the past few years tracks overall changes in the industry. The company was best known for its standard dimmers and high-end lighting control systems that ran well into the five figures. Now, Lutron has a spotlight on its Caseta wireless system that combines the control of lighting, shades, and thermostats. Caseta is able to control as many as 50 devices in the home, and you can create your own scenes and automation routines by using a smartphone or tablet app. Based around a Lutron smart hub that connects to a router, Caseta allows you to control your lights from across the room or across the world by using a simple remote control, wall-mounted keypad, or iTunes or Android app. A smart bridge runs $150, a light switch $25, and a dimmer/switch $72. Caseta, which will also integrate with other control systems from Savant and alarm.com, comes in DIY and professionally installed versions.

Why Invest in Smart Lighting?
There are many reasons to invest in lighting control: security, energy savings, convenience, and aesthetics are at the top of the list. One thing seems certain: Once you’ve lived with lighting control, there’s no going back. It doesn’t take long to get used to turning out all the lights in the home with a press of a button. You’re far more likely to use mood lighting if preset dimming levels are programmed into a keypad or a smartphone app. Why flip a light switch when you can have a Lutron Maestro dimmer sensor turn on the light as you enter the laundry room with a basket of clothes and then turn it off after you leave?

Smart lighting can work with other automated home functions, too. For instance, a garage door opener can integrate with your home’s lighting so when you tap the open button on the car visor, the door opens and a pathway of lights illuminates your way to the kitchen. Or, use a motion sensor while you’re away from home; when tripped, it can trigger lights to go on while the security system wails. And by installing occupancy sensors, you’ll never have to remind the kids to turn off the lights in their closets again, as these devices make sure the lights go on and off when entering and leaving the space.

While this functionality has been available in the past, costs were prohibitive for most consumers. But improvements in wireless technology, wider availability of products that speak the same language, and control apps for mobile devices have made lighting control—along with other types of smart home control—far more accessible. “DIY and monitored solution offerings from service providers and platforms like SmartThings are making lighting controls affordable and available to a larger percentage of the population,” says Sean Bryant, vice president of sales for CentraLite, a manufacturer of lighting control systems.

Option 1: Hardwired, High-End Systems
CentraLite, too, began as a provider of hardwired solutions best suited to new construction. High-end lighting control companies recommend a hardwired solution whenever possible, which often limits their systems to new construction or extensive retrofit projects where low-voltage wiring can be easily fished while the walls are open. Keypads in Lutron’s HomeWorks QS system or CentraLite’s Elegance system replace a bank of light switches, presenting a more sophisticated look. The hardwired systems offer the highest level of flexibility, scene options, and large-scale control that are limited only by your budget and imagination. They’re priced accordingly. A Lutron HomeWorks QS system starts at $15,000–$25,000, says Weinstein. Bryant quotes the CentraLite Elegance at roughly $100–$175 per device, professionally installed and programmed, depending on location. Luxury-level lighting control is also part of complete custom home automation systems from companies including Control4, Crestron, Savant, and Vantage Controls.

But while there are a million or so homes in the $1 million-plus range in the U.S., there are some 7 million homes between $500,000 and $1 million and another 67 million in the $250,000–$500,000 range, says Lutron’s Weinstein. These homes are ripe for affordable, retrofitable automated lighting solutions, and as the smart home gains traction, the lighting control options are growing.

Option 2: Wireless DIY Systems
It’s easy to step gradually into lighting control thanks to do-it-yourself solutions available at stores including Home Depot, Lowe’s, and Staples. Lowe’s was an early participant in DIY smart control with its IRIS Home Management System. According to Lowe’s, 1.5 million U.S. homes have installed smart home systems and another 15 million are expected to be connected within four years.

Lowe’s sells DIY starter kits for wireless home automation geared around security and comfort, and light switches or smart bulbs can be added to a system. Lowe’s sells light switches from Cooper, GE, Legrand, and Lutron that are compatible with IRIS, and the Sylvania smart BR30 LED bulb has its own communications capability built in so it doesn’t require a connection to an outlet or plug. The Lowe’s IRIS Smart Kit ($200) comes with a keypad, thermostat, smart plug, contact sensors, motion sensor, range extender, and wireless hub. Basic service for the IRIS is free, including on/off control of devices—lights, electronic door locks, and Wi-Fi cameras—and email alerts if an alarm is triggered. For $9.99 per month, monitoring and control options expand, and you can create scenes for lighting. If a motion sensor is triggered, a light could automatically illuminate, for example. Creating a vacation mode could turn your lights on and off to give your home a lived-in look.

Similar solutions are available through Staples’ Connect platform, Belkin’s WeMo system, and Wink-compatible devices sold at Home Depot. The ecosystems are growing and morphing on the fly. Samsung bought SmartThings last year, Google bought Nest, and Apple has HomeKit on the horizon for smart home control. Look for device compatibility with Z-Wave, ZigBee, and Wi-Fi to find the largest number of compatible devices that can be controlled by a smart home kit today, but know that the market is growing fast, so stay tuned.

Option 3: App-Centric Systems
Apps and smartphone control were a major step forward for lighting control, but it doesn’t stop there. When Apple CEO Tim Cook announced the Apple Watch last fall, he showed how lights could be controlled from a watch using a Lutron Caseta app. Wink-compatible products can be controlled by a Jawbone UP activity tracker. As the Internet of Things proliferates, you’ll be able to control your lights by your TV, smartphone, tablet, and wearable device. And you’ll be able to write your own rules.

Option 4: Powerline-Based Systems
Not everyone is comfortable with installing switches and keypads, and others don’t have the patience to set up even a basic lighting control system. A system such as the PulseWorx from PCS is an affordable option available from security dealers and home systems integrators. Advantages of PulseWorx over wireless systems is range, says Tony Dubinsky, owner of ASD Electronics, Bridgeton, Mo. PulseWorx operates over the home’s existing powerline network and doesn’t require a repeater to extend the range of the signal, he says. A dealer can set up scenes with a PulseWorx system that are selectable from a keypad. Lights can go on when a motion sensor is tripped. Expect to pay from $100–$200 per switch for PulseWorx lighting control, says Dubinsky.

Practical Applications
Lights, Camera, Action: A home theater begs for controlled lighting due to the different lighting levels required. A “Welcome” scene when you enter the theater should be bright, enabling you and your guests to choose your seat, place a drink in a cup holder, and read a Blu-ray jewel case. When the show starts, it’s time for the lights to fade out slowly to create a dramatic effect and the proper dark setting for viewing a movie. An “Intermission” setting lights a dim pathway of foot lighting to the exit for a snack or a break. “Show’s Over” brings back the lights slowly to a comfortable setting when the movie is over. Control4 can integrate lighting with theater control for $500–$1,000, says Paul Williams, Control4 vice president, lighting and comfort.

The Dog Run: When you need to let the dog out at 2 a.m. you don’t need to turn on every light in the house. Select the “Dog Run” scene you’ve programmed on your keypad or phone app, and a path of selected lights illuminates your way to the back door. Combine an Elk Automation system with a CentraLite system, says Bryant, and “pressure pads can automatically turn on stairway lights when someone steps on the first step.”

Crowd Control: You can use lighting to steer guests to areas you want them to be when entertaining, says Williams. A homeowner who starts a party outdoors during the afternoon can guide guests indoors at dusk by lighting areas where you want them to mingle: the living area, the media room, the downstairs bar, and the pool area in the: backyard. “With one quick: scheduled: scene, have the: appropriate: lights gradually light the way for: your: guests,” says Williams, and darkened areas are understood to be “off limits.” Full indoor/outdoor multi-room lighting control can add about $10,000, including installation, to a Control4 system.

The Dimmed Bulb: Lighting accounts for about 12 percent of the average U.S. household’s $2,200 annual energy bill, says the Department of Energy. Wouldn’t it be nice to whittle that percentage down while adding to the ambiance of your home? That’s what lighting dimmers do, according to dimmer king Lutron, which says every dimmer automatically saves between 4 and 9 percent in electricity over an on/off switch, even when set at the highest levels. Whether it’s part of an overall lighting control system or an individual dimmer switch, the more you dim, the more you save. But do your homework. Energy-efficient LED bulbs don’t dim the same way as incandescent counterparts. Lutron’s website lists LED bulbs compatible with its dimmers.

Sun Block: Everyone loves a bright sunny room … to a point. There are times when you want to control that light, too, and electronic shades are the answer. Lutron’s Serena shades can be programmed to drop when it’s sunny in summer, to minimize the heat coming into a room. You can create your own scenario with IFTTT (If This Then That) “recipes.” If it’s sunset, then close the shades, for example. Shades can also integrate with other products, such as a Nest Thermostat and lights, says Lutron’s Weinstein. For example, when Nest reaches 78 degrees, the solar shades drop down, the air conditioning goes on, and the lights dim.

Options for All
Whether you’re building a house and have the opportunity to add new cabling, or if you’re sprucing up your existing abode, there’s a lighting control system that can be added for enhanced convenience, energy efficiency, and aesthetics. You can hire a professional to install your system or do it yourself. And when it’s time to set up schedules and routines, the sky’s the limit. Let your imagination soar and take your home’s lighting to a whole new level. EH