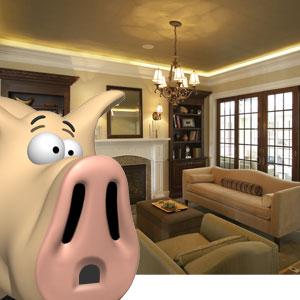 Here’s the good news: The biggest energy hog in your house is not your flat screen. And it’s probably not your home theater system—unless you’re pumping out watts by the thousands. There are ways to save energy on those suckers, but why not concentrate your high-tech energy-efficiency efforts on the appliances and devices that the pull the most juice from both the utilities and your wallet?

And no, you don’t have to get all cuddly with pink insulation. Though in some cases, it wouldn’t hurt.

Here’s a rundown on the worst energy culprits in your house and the cool ways you can tame them to save you some money.

According to the Department of Energy, heating your home accounts for more than half of your energy costs. Now that could be heating with oil, gas or electricity. But in any case, you can get your costs under better control, depending on how much you want to invest.

Easy fix: Turn your thermostat down. For every degree you turn it down, you save about 1 percent on your utility bills. It doesn’t sound like much, but it adds up.

Get serious: Invest a few hundred in a smart or programmable thermostat—and program it! They’re not hard to set, and you can schedule it for different temperatures at different times, so a room can use less heat at night while you’re toasty in bed.

Get really serious: If you’re heating with oil or gas, look for a modulating and sealed combustion boiler. A modulated boiler fires at different settings so it can burn lower on a hot day instead of firing at the same high level as the coldest day of the year, which is how many boilers are set. These boilers are much more efficient than the standard builder specials that lurk in many homes.

Go nuts: Look into heating with an alternative form of energy, like geothermal. It uses the constant heat in the ground then boosts it via a heat exchanger to warm your tootsies. Geothermal systems work great with radiant floor heating systems, but they can be costly—think five figures and above—and are best installed in while a home is being constructed.

We just knew this would be next, didn’t we? Cooling can account for 12 percent to of your energy bill, on average—and this will certainly be higher in sunnier climes. There are great ways to control your cooling costs, too.

Easy fix: Use fans, not air conditioners. Fans draw much less electricity than A/C units. But remember, they don’t cool a room. They just cool the people near them, so don’t leave them on when a room is vacant. That is so un-cool. If you have skylights, open them to exhaust rising hot air. A ceiling fan beneath a skylight can be reversed to draw warm air up and out, forming a thermal chimney that helps keep your house cool. Still gotta have that A/C? If you raise your thermostat by only two degrees and use your ceiling fan, you can your lower cooling costs by up to 14 percent, according to the EPA.

Get really serious: Buy a programmable thermostat (see #1) or a home control system that hooks up to a heating, ventilating and air conditioning (HVAC) system, so you are able to control the temperature settings in various zones of your house via a touchscreen, or even remotely. A home control system will cost you in the thousands, but if you can pre-cool your digs before coming home or reset the thermostats from your phone as you’re leaving for vacation, it could be worth it.

Go nuts: Invest in both a home control system and motorized window treatments, and tie them to temperature and light sensors so the shades or curtains will close when a room gets too hot. These systems are high-end and expensive, but they can be automated to help you save on your cooling costs (as well as heating and lighting costs). Look for more motorized shading systems to be integrated with lighting control, so that the shades will open automatically to allow natural light in and reduce your lighting costs.

It’s the big Number 3, especially if you have a house with teens who love long, hot showers. Domestic hot water is likely responsible for big part of your energy bill—no matter how you’re heating it: oil, gas, or electricity. Is there a way to curb the amount of energy you’re using to heat water? Absolutely.

Easy Fix: Set the temp of your hot water heater to 120 degrees for the best comfort and efficiency. You can also save energy by washing clothes in cold water and using a dishwasher instead of washing dishes by hand.

Get serious: Invest in Energy Star appliances such as water heaters, dishwashers, and clothes washers.

Get really serious: A gas-fueled tankless water heater, which uses high-powered burners to quickly heat water as it runs through a heat exchanger, can be 22 percent more energy-efficient than standard gas-fired storage-tank models, according to a Consumer Reports test. “That translates into a savings of around $70 to $80 per year, based on 2008 national energy costs,” the magazine reports. Unfortunately, payback could take up to 20 years, and reviews of the models are mixed. Nevertheless, you’ll find tankless water heaters in many new green homes.

Go nuts: Look into having solar thermal system installed. This type of system uses heat from the sun to warm water, largely for domestic hot water use. Most houses can get buy on a couple of solar thermal panels, tied to a solar thermal water tank. Solar thermal systems can cost about $8,000, but you’ll get more bang for your buck than you would with a more expensive solar electric system—especially if you’re presently heating water with gas or oil. Federal and state tax incentives exist for buying solar thermal, as well. With present tax incentives, you could save 30 percent or more on the cost of these systems.

Yep, lighting uses about 11 percent of your home’s total energy draw—especially those big floods you may have out front. But it’s also the little things that add up: the light left on in the garage or closet all day, kids leaving their bedroom lights on. It doesn’t seem like much, but it can drain your wallet pretty fast. There are many things you can do to cut back.

Easy fix: Replace some of your lights with compact fluorescents. Yes, many people don’t like CFLs—and with good reason. The color of the light often seems cooler than the color of good-old “warm” incandescents, though CFLs have improved greatly. For a “warmer” or “softer” light, look for CFLs with color temps in the 2,700 to 3,000 Kelvin (K) range. And put them in places like closets and the garage, where you’re not as concerned about ambiance—and if they do get left on for a few days they won’t use as much electricity as incandescent bulbs.

Get serious: Install some dimmers and occupancy sensing lights. Dimmers are inexpensive fixes for incandescent and halogens light fixtures. Dimming a bulb by just 15 percent, which is hardly noticeable, can save you about the same on your electric bill. And occupancy sensors are great for bathrooms and kids’ rooms. When the sensor detects that no one is in the room after a certain amount of time, it simply shuts off the light.

Get really serious: Invest in LED (light emitting diode) lamps. They are the future of lighting, and they are now ready for prime time. Good-quality LEDs will last years, and they are 90 percent more efficient than incandescent lamps, many of which will be phased out of production starting in 2012 (100-watters are first). Dimming LEDs can be an issue, but more and more solutions are becoming available. Just don’t buy the cheap stuff. A decent LED lamp to replace a 60-watt bulb can cost $40 to $60—and if a price looks too good to be true, it probably is.

Go nuts: Get a lighting control system. This will allow you to set scenes, which incorporate only the lights you need for a particular activity—like watching movies or reading. One scene could even put your home in low-light state. Most lighting systems can be tied to security and home control systems, so many lighting presets can be triggered automatically at prescribed times of the day or when the security system is armed, for example. Try to add as many LEDs to the system as possible, especially for exterior lighting.

We knew this was lurking, didn’t we? Yes, your electronic devices constitute another 9 percent of your utility bill. And some of the biggest energy bandits in this category are big-screen TVs. Thankfully, TVs are getting more and more efficient, and yes, there are easy and expensive ways to save even more.

Easy fix: Use the power management settings on your computer. Put that sucker to sleep after 15 minutes of inactivity—and the monitor, too. (Too many people leave their computers on all night.) You can save about $60 a year just by using your power management settings, according to web site Climate Savers Computing. Some newer TVs also have energy-saving settings. And be sure to take you TV out of the super-bright and saturated “torch” mode used in retail settings. This will not only minimize the amount of electricity you TV uses, but also improve the picture quality. 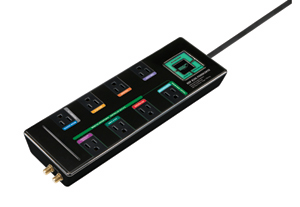 Get serious: Plug your electronics into surge-suppression strips, and switch off the strip when you’re not using the devices. This will effectively cut power to your electronics and prevent them from using vampire power, which is the electricity devices consume when they are “off” or in “standby.” Many homes can have 40 or more of these power vampires, robbing you of your hard-earned cash (to the tune of 5 percent to 10 percent of your electric bill.) If it’s too much to switch something off, or you’re afraid you’ll forget, smart surge suppressors are available for both computer and home theater gear. You plug a computer or TV (or receiver) into the master outlet, and when it goes to sleep or shuts off, connected devices like printers, computer speakers, DVD players and the like power off as well. Money is saved. A smart surge suppressor generally costs less than $100.

Get really serious: Buy Energy Star-rated TVs, or specifically, LED TVs, which are LCDs backlit by energy-saving LEDs instead of the usual fluorescent backlights. There are edge-lit LEDs that use LEDs only on the sides of the picture, and full backlit panels, most of which can dim parts of the picture to save even more energy. (The latter is called local dimming.) This dimming feature won’t impact the picture quality. In fact, you’ll likely get a better picture from an LED TV than a fluorescent-lit LCD. If you must have plasma, sets from Panasonic are proving to be quite energy-efficient, as well. Yes, you can get an Energy Star-rated plasma TV.

Go nuts: Invest in an energy monitoring system that provides real-time feedback of your electricity use. (People with immediate feedback typically save 5 percent to 15 percent on their energy bills.) You can even get circuit-level energy usage information from a product like Powerhouse Dynamic’s eMonitor (it costs a few hundred bucks and a monthly subscription). For several thousand, step up to a commercial-grade Agilewaves system, and you can monitor gas and water consumption, as well as solar energy production. Add a home control system that works with the energy monitoring system to turn things on and off automatically, and you can save up to 30 percent. And don’t forget to add power conditioners with individually controlled outlets to preclude devices from drawing unnecessary vampire loads, and have them governed by the control system.