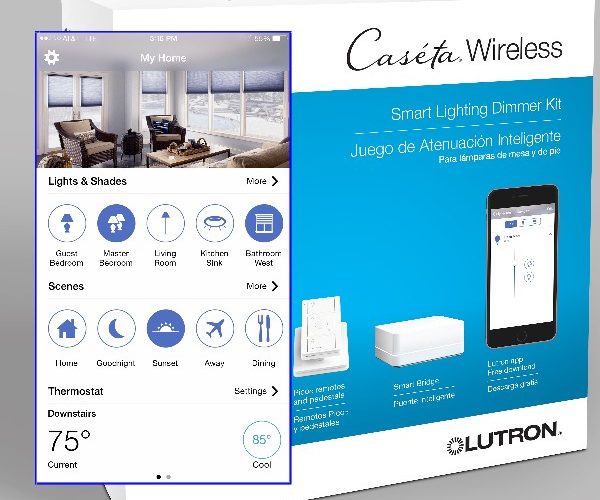 Apple Homekit isn’t officially launched yet, but companies are still lining up to be part of that DIY home automation family. Lutron announced this week that a new version of its Caseta Wireless Smart Bridge will include Apple Homekit compatibility, and the company is offering a starter kit at Apple stores for $229.

Lutron launched the original Caseta Smart Bridge hub and associated products in 2014 in both professional and DIY versions. The Smart Bridge hub and app allows for wireless control and integration of a variety of lighting products as well as Lutron wireless motorized Serena shades via Lutron’s ClearConnect technology. Now, by adding Apple Homekit compatibility to the system, the Caseta smart home products will be able to be controlled via Apple’s Siri voice-control feature. Users will be able to speak into their iPhones or iPads to give the system commands such as “Turn off the lamp,” “Turn off lights in the bedroom,” or “Close the kitchen shades.”

Another feature of the Apple Homekit integration is that the Lutron Smart Bridge will be able to integrate with other, Homekit products, via 3rd party Homekit apps, and allow those products to be grouped in zones. For example, if you have a Homekit outlet module from another company, within a Homekit app, you can add it to a zone or group, and control it via Siri.

MORE:HomeKit is Coming: How Will Apple Home Automation Be Different

The Caseta system also includes a geofencing feature which can automatically turn on or off devices based on your location. In other words, your lights will automatically turn off when you leave the house, and turn back on when you get home, without you having to touch a switch or an app.

While this isn’t the first Homekit smart home hub we’ve heard about—Insteon announced plans to offer one back in January, and that one is now available via Amazon or through Smarthome.com. You can buy the Lutron Caseta starter kit from Apple Stores now. For $229 you get the Smart Bridge, two dimming lamp modules and two Lutron Pico remotes (these are nice if you don’t want to have to open an app every time you need to turn on a lamp).

A pro version of the Smart Bridge with Homekit will also be available to professional installers, and that version adds control of Sivoia QS Wireless Shades (the DIY version controls Lutron Serena motorized wireless shades).

It’s important to note that the Lutron system, and the Siri integration, works and is available BEFORE Apple Homekit is actually here. This makes it the first Homekit product you can buy, and the first (without a hack) that can be controlled via Siri.

Apple hasn’t officially launched Homekit, and some rumors suggest that it won’t be available until August or September, but this Lutron system can be purchased now, and again, the Siri integration works out of the box. More Homekit news will likely be revealed at the World Wide Developer Conference June 8th.