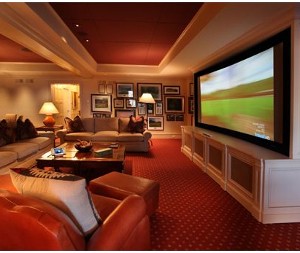 We talk a lot about home theater projectors–how bright they are or what kind of contrast ratio they offer, but the projector is just the device that delivers the light. There are other factors that help ultimately determine the picture experience, including the home theater screen, ambient lighting control and room characteristics. Here are some basic guidelines for dealing with light in your theater or media room.

The material you aim your home theater projector at plays a big role in the image, but choosing a screen isn’t always simple. There isn’t one screen that will work for every situation. The truth is that screens will behave differently in different circumstances, so you have to carefully consider what your room needs and what you want out of it when selecting a screen.

Eric Haas, technical specialist at Current Concepts in Coopersburg PA says he recommends screens on a case-by-case basis. “We take into account the screen gain, the light output of the projector and the ambient light in the room,” he says.

For rooms with a lot of ambient light, he’s installed screens with a light rejection surface (also called angular rejection), which can work very well, but there may be situations where even that doesn’t solve all problems. For instance, light rejecting screens are designed to turn away light at very specific angles while accepting light that comes from the direction of the projector. In one home, he found that light coming in through a window in the back of the room was hitting the screen at just the right angle that the screen essentially treated it as if the light was coming from the projector, while light from other parts of the room didn’t create a problem.

There isn’t an all-around best screen—one that works perfectly in all situations—but some basic guidelines can help you get the one that will work best, most of the time, in your room. “We were founded on the principle that there is a perfect screen for every application,” says Dave McFarland of Stewart Filmscreen. Finding that screen is a matter of evaluating the room’s variables, the projector and your expectations (and budget). However, to make selection easier people, Stewart recently launched a new brand of screens called Cima, which includes two materials: Neve, a while material with a wide viewing cone appropriate for light-controlled rooms; and Tiburon, a gray screen meant to boost black level in rooms with more ambient light.

David Rogers of Elite Screens agrees that screens which selectively reject light can work very well in “light infested” rooms because the screen’s reflective under layer only returns light coming from the direction of the projector. The downside is those screens may have a narrow viewing cone.

Stewart suggests that users should also be aware of lens ratio when selecting a screen, because it can impact uniformity and hot spotting. The company recommends that screen gain should never be greater than the lens ratio.

Harry Blanchard, of Hi Fi House in Broomall, PA, first looks at the shape and size of the room, when recommending a screen. A wide room he says, will require a screen that allows for a wide viewing cone. Some screens will focus their reflected images in a narrow cone toward viewers directly in front, while others cast a wider image. When looking at screen specs, look for the half gain number. The larger the number, the larger the viewing cone before the brightness drops by half from peak brightness. The shape of your room and spacing of your seats can determine what screen works best in your room. Because projection screens in dedicated home theaters tend to be big, often filling up most of the wall, this doesn’t tend to be an issue in a lot of rooms (but it is a big deal for flat panel TVs). Some high gain screens can focus the image in a narrower angle.

Blanchard notes he turns to a Stewart Studiotek 130 screen (a matte white 1.3 gain screen), but if excess ambient light is an issue, then a high-contrast or angular reflective screen is preferred.

When looking at light rejecting screens, it’s important to know that most screens only reject light from one plane. Screen Innovations’ Black Diamond material, says SI director of sales Blake Vackar, is the only one that rejects light from both the horizontal and vertical planes. This means that light from side windows and a white ceiling are both turned away from the picture, reducing light scatter by 75 percent. It does this by incorporating eight optical layers over a highly reflective surface. The curious part about the Black Diamond (particularly the 4k .8 material) is the screen material is black, but when you shine a projector on it, you get vibrant colors, real whites and deep blacks. That screen does have a fairly narrow viewing cone of 45 degrees to half gain , so this makes it appropriate for a dedicated theater with seating all grouped in the ideal viewing area. For a wider room, SI offers a 1.4 grain dark gray screen with a wider viewing angle and most of the contrast benefit of the black screen.

Vackar notes that a wider viewing cone can be important for media rooms, especially for video gaming, because gamers may be situated all around a room. Black Diamond screens come in a Zero Edge format that looks better in multi-purpose rooms.

Another option for battling extreme light situations is to use two projectors in a system such as Elite Screen’s AirFlex5D system which stacks two projectors into one housing and uses a processor to keep them in sync. Such as system can deliver double the light output of a single project, but can cost less than buying an ultra-bright projector.

Draper recently added a screen selector tool on the company’s web site. You can check that out here. Most other screen companies offer similar tools, but if they don’t any home theater dealer/installer will be able to walk you through identifying the same variables to help you decide. 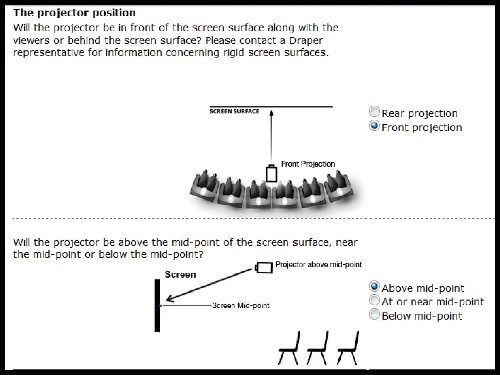 Commercial theaters are painted dark colors for good reason—because you want to focus on the screen and not the walls. But no matter how dedicated a movie viewer you are, you probably don’t want your home to look like a commercial cave. “You’re always dealing with compromise” says Haas, when creating a home theater or media room space. One of those compromises may be on room color.

First let’s talk about sheen. Semi-gloss paint can be easier to clean, but it’s also reflective—it will reflect the projector’s light, making the room brighter, and can even reflect back on the screen itself. Haas says matte or flat sheens are best, especially in dark, earthy tones, but eggshell is acceptable too. Any sheen more than eggshell will be too reflective, even on the trim paint.

Blanchard notes that anything of color in the room has the potential to be picked up by the screen. Painting the front wall, where the screen goes, a flat, light-absorbing dark gray will help reduce any light that’s bouncing around the room from bouncing back at the viewer. “It helps define the picture.” He says.

For wall color, Blanchard says that dark, non-primary tones are best, but he also knows that most people don’t want to paint their favorite rooms dark brown just to make the picture look it’s best. “It’s about compromises,” he says, and also suggested that once the room is all set up, a proper projector calibration can compensate for many of the problems wall color may introduce.

What about the ceiling color? You usually don’t want to use ceiling paint—the common white paint found at all home improvement stores. Ideally, says Haas, a flat black or gray ceiling would be best. Many theaters use dark acoustic panels (wrapped in fabric) on the ceiling to both deal with first sound reflections from the front speakers and also absorb excess light. Vacker notes that the Black Diamond screens, because they reject light from both the horizontal and vertical planes, are able to reject light from a white ceiling. “It removes the room color from the equation,” says Vackar.

Blanchard suggests that a high-contrast screen can sometimes make up for walls that are brighter than ideal. In dedicated theaters (often in basements), people are more willing to go with traditionally darker tones and fabric, but in media or living rooms, ceilings are often higher, so the ceiling color isn’t always an issue. Painting the ceiling the same color as the walls or a light-absorbing gray will work too. 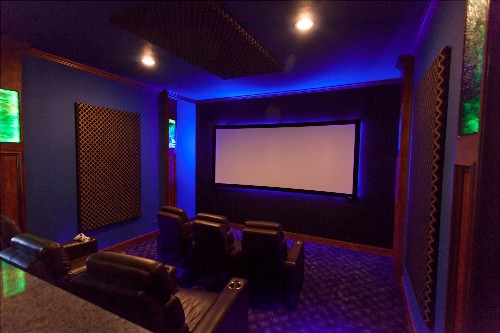 Light rejecting screens can also make up for some of the reflections coming off colored walls because they treat light reflected off walls the same way they treat ambient light. Plus, their narrow viewing cone keeps less light from hitting the walls.

If you really want to add some bright colors to the room without impacting the picture, Blanchard suggests using accessories such as wall accents, throw pillows or a rug with an attractive pattern. The important thing is to make it a room your family will want to be in.

A room’s got to have light, right? Determining how much light and where to put it to cause the least harm is a common problem in media rooms.

The most important thing is to keep light off the screen, then determine how much light you really need in order to use the room the way you want to. In a dedicated theater, eliminating all ambient light is pretty easy—just turn the lights off and enjoy the movie—but in a multipurpose media room, which may contain a wet bar, a pool table, and other non-screen activities, other lights are going to come into play.

Haas suggest that lights be kept as far away from the screen as possible, and not directed at the screen. For instance, lights that focus their output down on the user, rather than radiate out into the room, will allow for socializing without washing out the picture.

Blanchard says this is an area where lighting control solutions are very useful. He recommends creating separate lighting zones, so the area crucial to the screen can be dark, but other areas (such as a bar area) can have light. Wireless dimming products, like Lutron’s Maestro systems, make it easy to turn down the lights while you’re already seated in your viewing chair.

Recessed spot lighting can be useful for lighting up specific areas of a room (such as over a game table or bar) without casting much light out into the rest of the room or toward the screen.

With all this talk about getting the light away from the screen, it almost seems counter-intuitive to attach lights to a screen. But that’s exactly what SI can do with their Black Diamond Zero Edge. The Ambiance LED option puts LED lights around the perimeter of the back of the screen with 256 color options. Vackar says that the lighting improves perceived contrast and does not impact the screen image at all, and looks really cool. 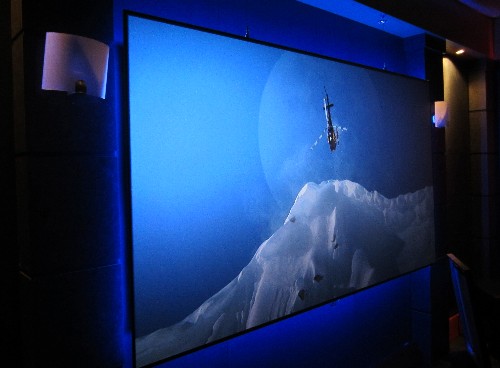 Ultimately the goal isn’t to create a space that fits some industry specs for home theater. The goal is to create a space you and your family will enjoy, in which both the décor and the electronics work together. Sometimes that means a compromise or two, but the results are worth it.