After meeting Gary Sinise at the hospital before surgery and at some of the actor’s Foundation events (Gary Sinise Foundation), SFC Michael Schlitz was aware of the wonderful work the advocate of veterans had been doing to help wounded and disabled soldiers. What he didn’t know was that he would be the recipient of the Gary Sinise Foundation’s first specially built and automated home. Developed through a partnership between the Gary Sinise Foundation and Core Brands, Schlitz’s new 6,500-square-foot home would be outfitted with a full-featured, custom-programmed Elan g! home automation system, as well as other high-tech products, $130,00 of which were donated.

The mission of the project, handled largely by the home systems integrators from Wisconsin-based IT and Media Solutions, was to make life as comfortable as possible for Schlitz, who had lost both arms, sight in one eye and had suffered burns to 85 percent of his body. “Home automation was a completely new concept to me,” Schlitz says. “Being in the military and always away from home, the world tends to pass you by, and that includes technology.” 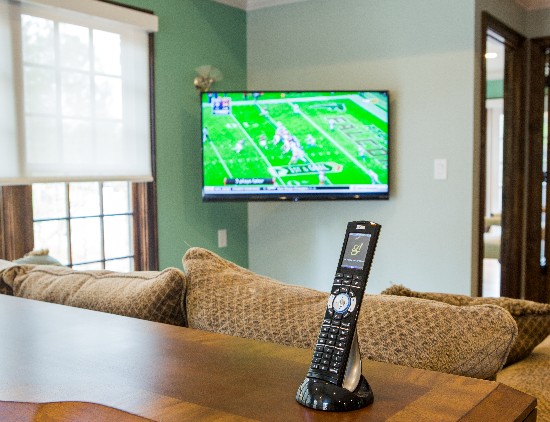 After several meetings with IT and Media Solutions’ Joel Berretitini, however, Schlitz was clear on the impact this technology could have on the quality of his life. “The intercom feature and the ability to easily regulate the temperature of the house are two features that have made a huge difference,” he says. “I live on one side of the house, and my mom, who is also my caregiver, lives on the other side. Being able to communicate with her through the built-in intercom on the Elan touchpanels is extremely helpful.” The ability for the Elan g! system to adjust the settings of five thermostats automatically is key to Schlitz’s comfort, as his burns make it difficult for his body to regulate its own temperature. Other systems that Schlitz can operate via the Elan g! touchpanels and iPad app include the lights, 12 surveillance cameras, security, whole-house music system, motorized 70-inch TV (using an Auton motor, Vutec motorized wall art and Sharp TV), five additional Sharp TVs and four Z-Wave connected door locks.

Everything can be monitored and controlled from specially designed graphic user interfaces on the home’s eight touchpanels and Schlitz’s iPad. Schlitz admits that it’s taken some time to get familiar with this new way of operating his home environment. “Not using standard light switches and remotes is a big change for me, but one for the better. I used to have to put on my prosthetic arms to press the buttons on a remote, but with the touchpanels and iPad, I can touch the icons to initiate commands whether I have the prosthetics on or off.”

Schlitz’s automated home marks the first of four homes that will be built by the Gary Sinise Foundation and will receive products donated by Core Brands and others manufacturers of home electronics products. 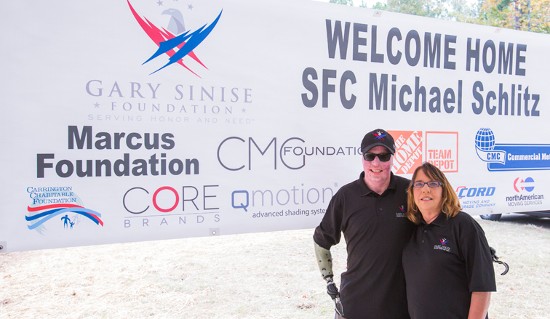