Everyone is packing smart features into bulbs these days. However, some products (like the Philips Hue) are a standout because they add color into the equation. With this version of the Sengled Pulse, Sengled is going a different route by packing a speaker into the bulb.

It may sound like a gimmick (and it sort of is) and really, this isn’t a first. Other companies are actually doing the same thing. However, the Pulse stands out because it actually sounds good, thanks to the JBL multi-channel stereo wireless speakers inside.

Out of the box, these things are ginormous — at least for a bulb. Each one weighs a full pound and measures 5.46-by-3.86 inches. However, you have to remember that they have speakers inside. You don’t really want them to be tiny. One of the things that I like about the Pulse is that it fits into almost any light socket. I say “almost,” because you’re not going to be able to squeeze these things into recessed fixtures. There are no cords or batteries, as well as no software or remote control. Most of the control options can be found in the app, which is available for iOS or Android devices.

Before you begin, make sure Bluetooth is enabled on your smart phone or tablet. Then, screw in the bulb and turn on the light. If you pair it properly, you’ll get a little audible beepity-bloop. I had no problems with this process. The master bulb immediately showed up on my iPad and gave me an on-screen invitation to snag the free Pulse app at the App Store.

Now, you don’t really need that app to start rocking out. I was streaming music from Spotify within seconds. The app is something you’ll want to control the lights, though. It does the dimming and the shutting off. If you attempt to shut off the bulb at the actual light fixture, you’ll also kill the speakers and that will be a total bummer.

Bright Idea?
As far as actual illumination, each bulb is rated for 30 watts of lighting goodness. However, if you want to use the speaker, that drops to 15 watts. I found it to be plenty bright for my office, as well as a second room in my house. Also worth noting is that each bulb is rated for 25,000 hours of life.

Of course, speaker performance is probably what you’re most interested in. After all, how good could a light bulb sound? Surprisingly, pretty darn good. Each bulb has a 1.75-inch speaker, which promises 13 watts at 8 ohms, as well as a frequency response of 100Hz to 20kHz. It was enough to fill my office with sound, but could also be a great solution for an outdoor party. (Just remember that the bulbs aren’t waterproof!) 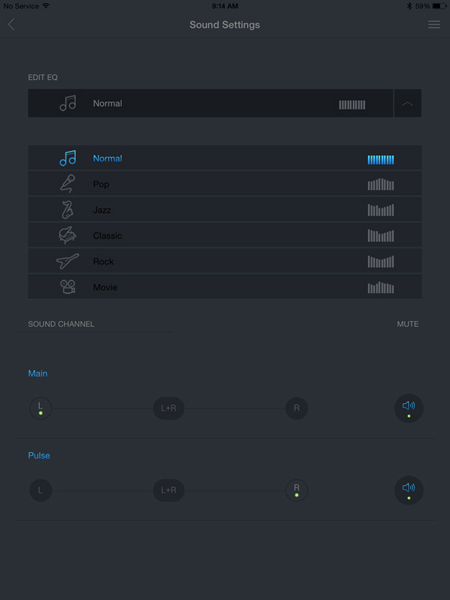 A peek at the EQ settings on the Pulse app.

During testing, I rocked a nice range of music out of these things. There was a little Me First and the Gimme Gimmes, ELO, Beastie Boys, OutKast, Katy Perry, Commodores, White Stripes, and David Bowie. I could go on — and I did. The Pulse was easy to use and sounded pretty nice, no matter what I threw at it. There were certainly moments that didn’t sound all that great. These things don’t have the type of range you’d get out of a multiroom audio system or a home theater. They will never rival that kind of setup — and frankly, they’re not designed to do that. However, they could certainly give a lot of boombox and portable speaker companies a run for your money. The JBL goodness is the secret sauce.

App-Tastic!
The Pulse by Sengled app is a boring one — right now, anyway. You don’t really need it to get the system up and running, but unless you like blinding lights glaring in your face during daylight hours, you’re going to need it. The app allows you to dim the lights or shut them down completely while the music plays on. That’s a nice feature. I don’t really want any lights on during the day, but that’s definitely my prime time to rock out.

Currently, the Pulse by Sengled app controls the one master bulb and one satellite. There are separate controls to dim the two different bulbs, but the on/off function will kill both.

The dimming requires holding down the up or down button. There’s no option to punch in a number. The same goes for the volume controls. Frankly, I just preferred to control volume through my iPad anyway.

Speaking of volume, the app does have sound settings, which offer slightly more individualized and interesting controls. There’s an option that allows you to choose which bulb is the left speaker and which is the right. If you’re only using one bulb, you can have that one pull double-duty (L+R). There are also separate options to mute individual speakers, turn each one off, or turn off the lot with one touch.

There are also six different built-in equalizer settings: Normal, Pop, Jazz, Classic, Rock, and Movie. This gives a slight tweak to the music, but I had the best results with just leaving it on the Normal setting.

Currently, Sengled is selling the two-bulb kit (one master, one satellite) in candy apple or pewter for $179.99. The satellite bulbs are available as singles, pairs and sets of four, so you can customize how many you connect to the master. Individual bulbs are selling for $79.99, with a four-pack going for $324.99.

Is Sengled’s Pulse a weird product? Absolutely. I can’t really imagine too many people saying that they need to have music shooting out of their lights, but it’s definitely fun. I was only given two bulbs for this review, but would love to hear what it would sound like to get a full eight-bulb system up and running. And while it’s certainly not something for everyone, there’s no doubt that it works — surprisingly well, too.

Currently, the Pulse is only available in candy apple and pewter.

Read this round-up of four other smart bulb/bluetooth speaker combos.

Also Check Out:
AirBulb Color is a Smart Bulb and Speaker in One
Hands On: AwoX StriimLIGHT Bluetooth Speaker with LED Light