If you know anything about Belkin’s WeMo line, you know that it easily adds automation into everyday tasks. You can automate a fan, an air conditioner and even a Crock-Pot. And if you’re willing to break out a screwdriver, the company also offers automated lighting, via the WeMo Light Switch.

However, wireless bulbs are a lot easier to change than switches, which is probably why the company is now adding those options into the lineup. The WeMo LED Lighting Starter Set is now shipping.

Belkin first debuted wireless LED smart bulbs back in January at CES. Considering the number of smart bulbs out there, they seem a bit late to the party, no? Also, how did they come out with an automated Crock-Pot before a smart bulb? It doesn’t really matter, because the bulbs are available now — and are cheaper than what was first announced.

The WeMo LED Lighting Starter Set comes with two bulbs and one WeMo Link, for $99.99. That WeMo Link can support up to 50 bulbs, which are sold separately for $29.99 each.

Unlike other WeMo products, you’ll need the WeMo Link to use WeMo Smart LED Bulbs. Like several other WeMo products (except the Crock-Pot), the WeMo LED Lighting Starter Set is IFTTT-compatible, so it will work with other WeMo devices right out of the box. It’s also important to note that these bulbs are 60-watt equivalent, with 800 lumens of brightness and a life expectancy of up to 23 years (based on 3 hours of daily usage).

Out of the Box
The WeMo LED Lighting Starter Set is just as simple as any other WeMo product. Inside the box, there are two bulbs, the WeMo Link and the Quick Install Guide. If this is your first time to the WeMo rodeo, you should also have the free WeMo app installed on your iOS, Android or Kindle device of choice.

The WeMo Link plugs into any ordinary (and available!) electrical outlet. This is a nice alternative to having to find an empty spot on your router. Once you plug in the WeMo Link, a light will toggle between green and yellow. Next, screw in the bulbs and launch the WeMo app.

For this review, I used my trusty iPad. That said, no matter what device you use, you’ll need to connect to the WeMo Link, just like it’s a wireless network. Just go into your device’s Settings, select Wi-Fi and it should be pretty obvious. Once you are connected to the WeMo network, go back to the app. Mine prompted me to do a quickie software update. After that, the app found the new bulbs, as well as the WeMo Switch that was already in my rotation. That was it. 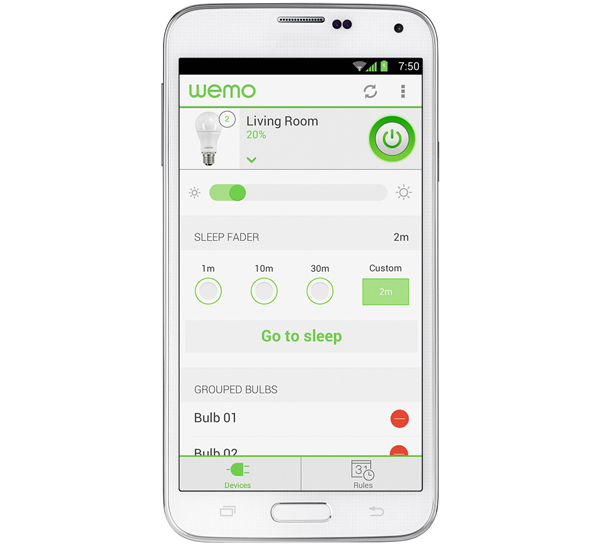 A peek at control options on the WeMo app.

What Now?
Well, technically, that’s not it. If you want to add other bulbs, you can “Set Up Another Device” in the More menu. If not, you should be able to start flipping lights on and off right away.

My WeMo LED Lighting Starter Set worked in the house, as well as on the go. Each one illuminated nicely with extremely bright light, but there are dimming options. I also really liked how each bulb would fade on and off — and had tweaking options to make that process longer or shorter.

Before you scoff at spending $100 on not getting off the couch to turn on lights, know that the WeMo LED Lighting Starter Set has quite a few practical applications. First of all, it’s nice to get home at night and not kill yourself getting into the house. Also, this type of setup offers a neat little trick for when you’re on vacation. Some people love to go into the app every night and flip on the lights from afar. However, the app allows for “Rules,” which are great for forgetful people like myself. Under the Rules, you can set certain lights to go on or off at designated times of day. You can even choose which days to do it. Of course, those options aren’t just limited to WeMo lights and bulbs.

For instance, for purposes of this review, I connected my existing WeMo Switch to a large fan. Then, I created a Rule that said every night at 8:37 p.m., I wanted to start the fan and turn on one of the two lights. This would be great during those hot summer nights when you’ve sweated it out in traffic and don’t want to continue at home. Just set it and forget it.

Another nifty option is “grouping.” This puts several bulbs under one command. Go into the app’s list of WeMo devices and click Edit in the upper corner. From there, you can drag and drop one light onto another, which will group them together. You can even name that group. From there, you can turn all of the designated bulbs off and/or on via one touch. However, you can’t group a bulb with a WeMo Switch, so that the fan and light have one touch. It also means that you won’t be able to control the bulbs individually. The latter is something I would love to see in an app update. After all, sometimes just one light will do.

That said, if some of your settings are a problem, all you need to do is toggle the actual light switch. That’s because if anything gets turned off or unplugged, you’ll have to reconnect it. If you like starting every day fresh, that’s great. I found this to be a bit of a downer, but having easy control and the additional dimming and dim-to-sleep options make up for it.

Another WeMo Winner
While the WeMo LED Lighting Starter Set doesn’t offer super-cool color schemes like the Philips Hue, it does automate lighting as advertised — and pretty cheaply, I might add. It’s not quite as cheap as the recently announced $15 GE Link bulb, but it’s competitively priced. It’s also an excellent option for existing WeMo users and a great addition to Belkin’s growing lineup.