How to Control Lights with Siri: Review of Lutron Caseta Smart Bridge with Homekit - Electronic House ​​ 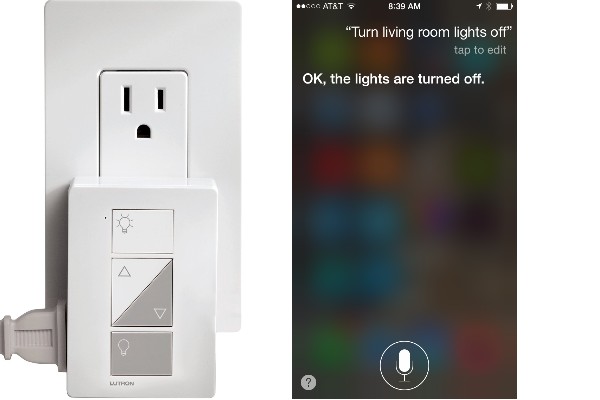 You use Siri to search for directions, to find nearby pizza shops and to send hands-free text messages, but wouldn’t it be nice to also use Siri for home automation or home control? Sure, there are some patchwork ways to do that, namely with apps like IFTTT and some clever hacking, but I’ve found those unreliable, slow and clunky to set up (one IFTTT solution is to use Siri to send a text message which then triggers an action in another app, such as turning on a smart light). Apple’s Homekit system and Lutron’s new Caseta Wireless Smart Bridge, makes it easy to control lights with Siri: (and it’s not just about lights). (Read about the security benefits of smart lighting control)

Last week Lutron introduced the new Homekit compatible Caseta Wireless system for lighting control, and just a few days later I had one in my home for review. Except for one glitch, which was probably my fault, not Lutron’s, the system setup quickly: and works perfectly.

The Lutron Caseta Wireless system I received came in the form of a starter kit which Lutron recently upgraded to be Homekit compatible and sells through Apple stores, and probably other places soon. Lutron’s Caseta Wireless system is a DIY smart home solution for integrating the control of your lights and window shades into an app for smart phones and tablets. Along with the Homekit capability is the ability to control the system with Apple’s Siri voice feature. The new Caseta system includes a Smart Bridge (this is the DIY version, but there’s also a professional version for installers that includes a few more features), two plug-in lamp adapters and two Pico remotes (more on how cool those are later).

The new Lutron smart bridge is identical on the outside to the previous one (which you can still buy). The new one, due to the Homekit and Siri features, is for Apple users only, so Android users will want to stick to the original. The Smart Bridge connects wirelessly to Lutron devices via Lutron’s own ClearConnect system.

The Smart Bridge needs to be connected via an Ethernet cable to your router or switch, and then to an electricity outlet, and then synced with the iOS app, before you do anything else. I first connected it to a 5 port matrix switch, but after 20 minutes of trouble getting it on the network, I moved it to my main router directly. Something else connected to that first switch also bugged out on me a few days earlier, so I’m going to blame the switch, and not the Smart Bridge (and luckily, I acquired a new, bigger, switch a couple weeks ago anyway, which will go into my rack pretty soon).

Anyway, once I downloaded the Lutron Caseta app, and the Smart Bridge did an automatic software update, I only needed to follow the prompts on my iPhone to connect the other devices. I next added the two lamp modules. Lutron’s lamp modules are better than any of the others I’ve seen because, first, they include inputs for two lamps, so you can operate two lamps off one module, though you can’t operate them independently. Second, they have on/off and dimming controls directly on them, so you don’t necessarily have to always go through the app to control the lights.

Adding each lamp module took about 30 seconds—just plug it in, press a button on the module so it can sync with the Smart Bridge, and then name it in the app. I called mine Tall Lamp and Two Small Lamps (two lamps on one module). Note that while the lamp modules do have dimming capabilities, dimming will only work if the bulb in your lamp can be dimmed. In my case, one of the lamps had a non-dimmable compact fluorescent blub, so that one just turned on or off.

Next I added the Pico remotes. These are, as you can tell from the name, little remotes. They have stands attached for sitting on a coffee table or something similar, but you can also stick them on a wall (with an optional mounting plate or just a bit of double-sided tape). The benefit of having the remote, particularly when using lamp modules, is that people are always going to be tempted to turn off the lamp with the lamp’s own switch. But when you do that, you can’t operate the lamp with the Lutron app or Siri. The remote acts as the local switch, and is handier than the original switch because it includes a dimming function. When you add a remote to the system, you also have to tell the system which lamp module it controls.

In addition to the lamp modules and remotes, you can add compatible Lutron wall dimmer switches and motorized window shades.

Once all the devices are added, you can group them by room and create scenes. Both processes are simple. To create a room, just follow the prompts in the app, give the room a name and check off which devices you want included in it. To create a scene, the process is similar. Name the scene, select the devices and, if applicable, the setting of the device (such as on/off, open or light level status).

The main screen on the Lutron app shows all your devices, so you can control them individually, or you can access whole rooms or scenes you’ve created.

The Siri part of the process comes at the very end. Once you’ve created all the groups and scenes, you can integrate with Siri through the Lutron Caseta app. To make your Lutron system work with Siri, you go into the “Settings” section of the Lutron app, and select “Siri Integration.” There the app will direct you to select what zones or rooms you want to control via Siri. For some reason you can’t control individual devices, such as one lamp, this way. I even tried to fake it out by creating a room with only one lamp in it, but the app recognized that that lamp was already attached to another room, and wouldn’t let me use it twice.

The entire setup process, minus my own issues with the network switch, took about 20 minutes. The longest part was waiting for the Smart Bridge to download an update.

Oh, and how well does the system let you control lights with Siri? Perfectly, so far. I hold the home button to engage Siri, give my command, and within 2 seconds the lights go on or off. This is great for when I’ve gone to bed, but know the kids forgot to turn all the lights off, or when I’m comfortable in my sofa and want to turn off the lights to watch a movie. It’s easier than unlocking the phone, finding and launching the app and then pressing the command to turn off the lights, though I do feel a little silly doing it when people are around.

Once more Homekit-compatible devices become available, even greater smart home integration with other brands will be possible. I look forward to being able to group Lutron lights and shades with smart thermostats, smart locks and other things.

Yes, it may seem like Siri is playing into my laziness, but, well, so what. Lutron and Siri together makes operating lights and window shades easier and more convenient, and if that’s lazy, then so be it. I’ve been called that before.