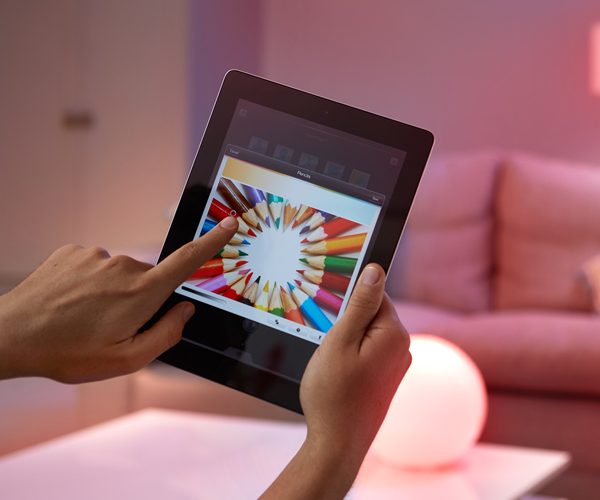 That’s because it’s easy, it’s affordable, it’s scalable, it’s beautiful, and it’s affordable. (Yes, I said that twice; it’s important!) It also has a lot of functionality—beyond even what Philips has given us. [And if you want to see what sorts of things they have given us, check out our Philips hue review.]

Because it’s so darn popular, several third-party developers have come up with a slew of interesting things you can do with the product. Let’s take a peek at five apps that allow you to get the most out of your Philips hue.

Hue Pro
This app offers everything you’d expect from the Philips app—except access for iOS devices. It’s strictly for Android users, offering everything that the native hue app has, including presets. It even adds in scheduling, alarms, timers, a music mode, and a Lava Lamp feature. However, one of the best perks is WiFi detection, which can flip the lights on and off whenever you enter and leave the house.

Lightbow
In a mood? Lightbow can put you into one—a good one. This controller can deliver presets, animations, groups, triggers, transitions and more. Other features include color calibration and the option to group lights by room, function and anything else. It works with every Philips hue product, as well as the ones from LIFX and Belkin WeMo. You can even combine all three under one app for the ultimate light show.

OnSwitch
Can’t afford a vacation? This app promises to transport you to New Mexico, the Sahara, Iceland and other far-away places through various lighting effects. It has over 30 different options, which also includes tinted lights, animations, Color Flow effects, and more. It even has wake-up and sleep timers, as well as the option for grouping lights. Another perk worth mentioning is that the app also works with LIFX smart bulbs.

Price: Free
Where to Buy: iTunes

Lampshade.io
This awesome app doesn’t have a ton of fancy effects. However, it does provide a lot of basic control, including the option to group lights and set an alarm clock. That’s not to say it doesn’t put some pop into your lighting setup. It does support NFC tags to trigger moods and there are plenty of animated color patterns, moods and more—including options to create and share with the entire LampShade online community. And FYI: In addition to Android, this app also works with Google Glass.

iConnect hue
As the first app to support the hue Tap, this option can group multiple actions per tap button and even set fade times. However, if you don’t have the Tap, this is still a great app, allowing users to organize lights in groups, adjust colors, save presets, and even turns lights on when you come home. (The in-app Remote Access purchase can also turn off lights when you go.)