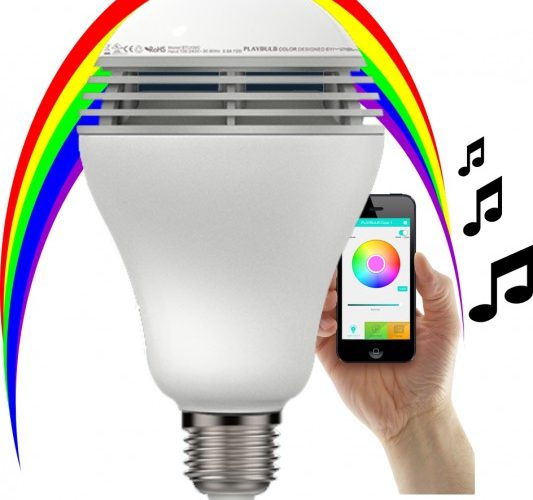 No fancy names, such as the “spulb” or the “beaker,” are needed. The speaker bulb is exactly what it sounds like. This one tiny product actually packs the power of music into LED light bulbs.

Why exactly would you want to do that? Because it’s a cool concept that can put sound into spaces you never thought of before. Sure, you probably aren’t going to outfit your entire home theater with these things, but having one or more speaker bulbs can be a nice addition (and a conversation piece) to an outdoor party, an office, a bathroom, a bedroom, or anywhere else where you want to sneak in a little sound.

Typically, these bulbs work with Bluetooth, so you can stream music wirelessly from your smartphone, tablet or computer. Some even bump that up with WiFi. However you connect, know that typically, no other devices or complicated setup is needed. It’s basically as easy as—you guessed it—screwing in a light bulb.

While there are other speaker/LED light bulbs coming soon that do look quite interesting (such as the Ion Sound Shine and Sony’s Symphonic lineup, to name a few), we want to highlight four speaker bulb products that you can actually buy today.

Sengled Pulse
This set works in pairs—as well as with JBL audio. The latter is what makes this set sound so impressive. And because there’s two LED light bulbs included in the package, you can have stereo sound anywhere there’s a pair of light fixtures. One of those speakers acts as the “master,” with the second being the “satellite.” The one master can accommodate up to seven satellite bulbs, for music throughout the house. Just screw in the master, pair it with the Sengled app, and you can instantly start streaming music from your favorite Bluetooth-enabled portable. Although it’s available in red and grey, don’t let the colors fool you; this bulb strictly cranks out 600 lumens of white light. Find out more about this particular bulb in “Hands-On: Sengled Pulse LED Bulb with Built-in Bluetooth Speaker.”

AwoX StriimLIGHT
This lineup has come a long way since its first Bluetooth-enabled speaker bulb (which we reviewed here). Now, there are a slew of AwoX StriimLIGHT bulbs, but all of them come packing the ability to stream music directly to the light socket. The StriimLIGHT SL-B10 is the original Bluetooth model. However, the StriimLIGHT WiFi smart bulb uses WiFi to connect the bulb to your smartphone, tablet, computer, NAS, web radio, and more. It even adds in the ability to synchronize sound zones and strengthen your WiFi signal with a range extender function. The StriimLIGHT Color bulb goes back to Bluetooth, but works with the app to tweak lighting levels, colors and music from across the room. And finally, the StriimLIGHT Color WiFi should be no surprise, doing the same as the non-WiFi Color model, but through your existing network setup.

MiPow PlayBulb Color
One of the most recent speaker bulb options is splashing a bit of color into this category. The PlayBulb Color is an LED light bulb and a Bluetooth speaker, but also features options to add color in any room in the house. Just screw in the bulb, download the free PlayBulb X app for iOS and Android devices, and pair the two together. Once everything is connected, you can stream music from your favorite mobile to every corner of the house—assuming those corners have the PlayBulb Color. Other features include wake-up and sleep timers, a nightlight option, and various lighting effects.

Klipsch LightSpeakers
Although Klipsch no longer sells these directly, they can be found on the web—and are well worth seeking out. After all, these LED light bulbs pack Klipsch sound into recessed 5- and 6-inch light fixtures. Each package includes two speakers with 2.5-inch Micro Cellulose Polymer drivers and a 20-watt digital amplifier with digital signal processing. Just attach the included transmitter to an iPod, PC or other audio source and start streaming. Find out more about this set in the “EH Buyer’s Scorecard: Klipsch LightSpeakers.”