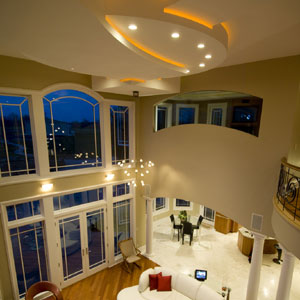 Home lighting automation systems can do many things. Driven by robust processors and versatile software, they can be programmed to turn on and off certain fixtures based on the time of day, the angle of the sun and who’s at home.

They can tell the lights to flash whenever your security alarm goes off, and to gradually dim the lamps in the great room in preparation of a movie. They can save energy by keeping the lights at a low level.

Lighting control systems are also good at making your house look occupied while you’re away on vacation. They come in a variety of forms and prices. (What system is right for you?)

Where lighting systems really shine, though, is in their ability to create scenes, or moods. A party scene, for example, could be designed to set sconces in the living room at an intensity level of 80 percent while keeping the lights in the kitchen at 30 percent. An artwork scene, meanwhile, could highlight sculptures, paintings and other pieces. Scenes allow you to get really creative with your lighting effects, so be sure to discuss all of your ideas with your custom electronics professional (CE pro), as most lighting systems must be installed and programmed by a professional.

The clever setups that follow should get your creative juices flowing.

#1, 2, 3 & 4: The Chameleon
LED (light emitting diodes) fixtures can add a touch of color to your home. The owners of this residence went a step further by tying the decorative ceiling lights to a home control system. Per a program designed by Audio Video Interiors of Medina, Ohio, the family chooses one of 26 colors to display overhead. The choices are presented on the screen of a touchpanel. For a different effect, there’s an ECLECTIC scene that fades the ceiling LEDs from one color to the next over the course of five to 15 minutes. 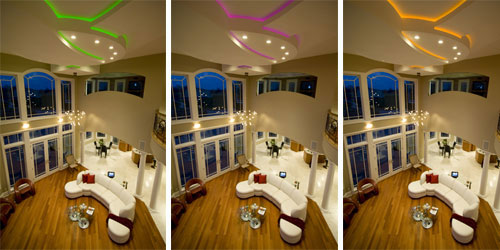 5 & 6: Day or Night
Fiber optic lights are often used in home theaters to transform ceilings into star fields, but the pros at Union Place in Excelsior, Minn., used the tiny ceiling fixtures to evoke a sunny day. The owners press either the NIGHT SKY button, signified by an icon of the moon and stars, or the day sky button, represented by an icon of a sun. The lights brighten and dim to create the desired effect. 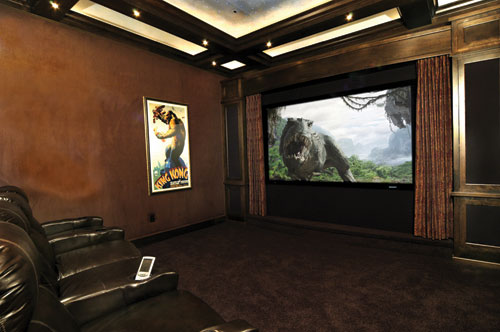 7, 8 & 9: Night Owls
Middle-of-the-night trips to the backyard with Rover are a reality for most dog owners. That’s why Ron Roslasky, owner of Intra Home Systems in Pompton Plains, N.J., programmed a scene for his Labrador Retriever. By tapping a button labeled DOG WALK on a keypad next to his bed, Ron is able to illuminate a pathway from the bedroom to the mudroom downstairs. The spotlights in the backyard also activate. The lights stay on until Ron makes his way back to bed and presses the DOG WALK button again.

Another button helps Ron and his wife deal with the night owls in their family. “I’m in bed hours before my teenage son and daughter are, but the KIDS button lets me stay in charge,” he says. Pressing the button turns off every light in the house except for the ones in his son’s and daughter’s bedrooms. To prevent all-night texting once the kids are in their rooms, another button, KID’S BED, switches off the bedroom lights.

10. Cuddle Up
Soft music, a box of chocolates, and a warm fire: Sounds romantic, huh? All that’s left is the lighting. Bright lights could kill the mood, so per the request of its clients, Audio Video Interiors of Medina, Ohio, crafted a CUDDLE scene that dims the lights in the master bedroom to the perfect romantic level. The scene is engaged from a keypad by the entrance to the room.

11. Bump in the Night
George Ide of Digital Interiors in Alpharetta, Ga., recommends a practical BUMP IN THE NIGHT button by the bed to switch on exterior lights so you can quickly investigate what’s making a racket outside.

“Normally, people will turn on the interior lights when they hear something outside, but that makes it hard to see outside, and lets anyone who’s outside see inside,” says Ide. This scene sets the lights at the perfect level for viewing the backyard at night. Sometimes Ide will add surveillance cameras so the images appear automatically on the screen of the master bedroom TV.

12. A Long and Well-Lit Road
Sometimes you don’t even have to press a button to activate a lighting scene. They can happen automatically, as is the case with this WELCOME HOME scene created by Ron Roslasky from Intra Home Systems. As the owners enter the half-mile-long driveway, sensors planted beneath the asphalt signal the lighting system to switch on the landscape lights. All of the lights don’t turn on at once, though. The lights turn on sequentially, about every 200 feet, as a car makes its way down the driveway. 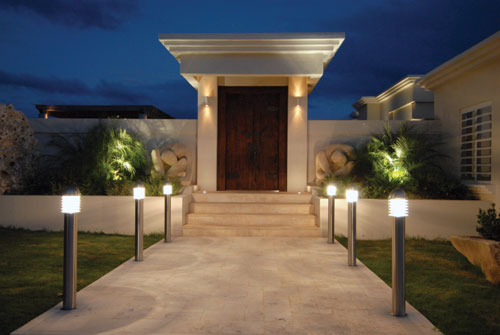 Getting Really Creative
If there’s one thing that bugs Michael Curtin, it’s a lack of creativity. As owner of EPI Design, a custom electronics design firm in Westchester, N.Y., he’s designed and installed dozens of lighting control systems for homeowners all over the metropolitan New York and Connecticut area. An important part of the process, he says, is deciding how to label the buttons on the keypads that operate the lights. “People stick with standards like HOME, AWAY and ENTERTAIN, but we encourage our clients to think outside the box and come up with interesting ways to engrave their keypads.”

Curtin’s creativity stems from an experience in 1997 with a client who coined button terms that Curtin still recommends. Curtin will never forget her knack for infusing wit, intelligence, humor and personality into her lighting system. Here are a few of the more interesting examples:

13. Guilt turned hallway and stair lighting to a 20 percent level while lighting a pathway from the master bedroom to the kitchen for midnight snacks. Called conventionally: pathway (Curtin’s other creative suggestion: cookies, tiptoe or snack.)

14. Chill was used to light up living areas when the client returned home from a long day of shopping in the city. Called conventionally: welcome home

15, 16 & 17. Dress, gossip and kill
One brightened the lights on her dresses, another dimmed the lights to chat with friends on the phone, and the last turned all the lights off. Called conventionally: on, dim and off

18. The French word toilette was used as the main button upon entering the master bath. Called conventionally: bathroom

19. The French word bain was used to gently illuminate the tub area while turning off the wall sconces. Called conventionally: bath.