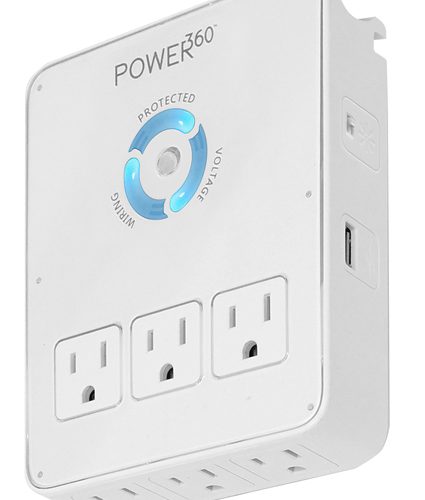 Most people don’t think about power protection until they get zapped. It’s not a fun revelation. However, Panamax is making the act of adding in a surge protector a no-brainer, with its new Power360 Series.

The Panamax Power360 Series is the company’s first affordably priced retail product line to protect and charge all electronic devices.

And really, it can accommodate all devices—as well as all households. There are several surge protector models available, including the wall-mounted P-360 Dock (pictured), the Six power strip, and the Eight power strip for larger workstations.

All three options have Panamax’s SmartGuard technology to monitor incoming power and safeguard against over-voltage or brownout conditions. That basically means that each one can automatically cut power if voltage levels are too high or too low and reset power when voltage returns to normal.

The P-360 Dock has six surge-protected 120-volt outlets and two USB ports that share a 2-amp capacity. It also has the “Technology Cradle,” which allows you charge up phones or tablets by simply resting those portables on the power supply.

Featuring six side-by-side outlets, the Six surge protector has a 2-amp USB charger feeding two ports, a coaxial in/out connection for the cable or satellite box, and telephone line protection for DSL or other phone line applications. That USB charger can be extended to a tabletop with a micro USB cable, so that you always have a charger available without having to get eye level with the outlet.

The last in the new Power360 surge protector lineup is the Eight, which has eight surge-protected outlets and two 2-amp detachable USB chargers that have two ports for a total of four simultaneous USB connections. This model is shorter and wider than the Six, but also has the telephone and coaxial in/out for signal protection.

“Consumers no longer have to worry about the safety of their electronics when plugging into an outlet,” says John Benz, the director of power and accessories at Core Brands. “From home theaters to WiFi routers, the Power360 is equipped with our reputable Panamax technology consumers can trust against any electrical mishap.”