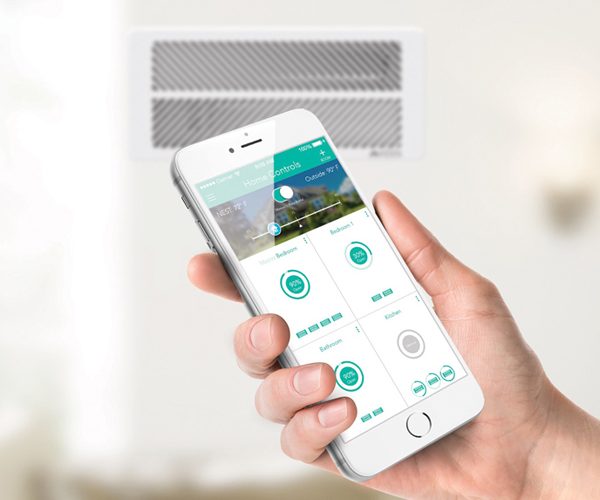 For a while, we’ve been talking about the benefits of having a smart thermostat. Sure, they allow you to adjust comfort levels while you’re lying on the couch or lying on a beach. However, most of these options make adjustments based on the temperature around the location of the actual thermostat. If you have specific rooms that are hot or cold, you may want to consider adding in smart vents.

Smart vents allow you to dictate which rooms get heating or cooling action. After all, why should you waste energy (and money) on heating a guest room or other area that’s typically unused?

While several smart vents have been introduced through crowdfunding, one manufacturer is making this technology available to the masses. Keen Home’s Smart Vents are now available at 576 Lowe’s locations, through Lowes.com, and even on Amazon.

Keen Home’s Smart Vents allow you to wirelessly control air vents throughout the house, so that heating and cooling can be redirected to the spaces that need it the most. Users can control the vents using the app, which is currently free for iOS devices. Keen Home plans to release an Android version sometime in December.

To use the app, you’ll need to add in the Keen Home Smart Bridge (pictured below). However, Keen Home Smart Vents are compatible with the new Lowe’s Iris Smart Hub and the SmartThings Hub. The app allows users to access Smart Vents individually or in groups and create schedules. Other Smart Vent features include embedded sensors for automatic operation and interchangeable faceplates. Each one is also dishwasher safe.

“The Smart Vent is a big step towards the proactively aware home that can take care of its occupants,” said Nayeem Hussain, co-founder of Keen Home. “Millions of homeowners across the U.S. and Canada now have the opportunity to install a Smart Vent System to get rid of pesky hot or cold spots once and for all. We’re sure they will enjoy seeing a difference in their energy bill, too.”

Keen Home Smart Vents are available now, starting at $79 each. The Smart Bridge sells separately for $39. Keen Home also offers a starter kit with two Smart Vents and one Smart Bridge for $199. The company plans to release additional smart home products and partnerships sometime in the near future.

In the market for a smart thermostat? Read our new buying guide.