The problem is that you don’t always need to have the heat so high — or so low, for that matter. Having a good thermostat can save you some of the time spent tweaking and even a few bucks, especially in peak months like this one. That’s probably why the Nest Learning Thermostat has become such a hot item in the Electronic House world.

The first Nest launched in late 2011 and was recently upgraded to a second-generation version, which is what I used for this review. The good news? It’s still the same price. The bad news? It’s still the same price. Since the product was first released, I had a hard time wrapping my brain around paying $249 for a thermostat. After all, my old thermostat was a small fraction of that cost. Of course, it was downright ugly and always seemed to need a battery and/or constant tweaking.

The Nest is for people that don’t want that. They don’t want complicated programming and don’t want to tweak. And if tweaking is necessary, they want it to be as easy as putting on socks. The bottom line is that the Nest delivers and is well worth the price. Now, let’s take a closer peek at the device that’s turning thermostats into a hot commodity.

The Nest is a slick little device. I mean, the thing looks good on the wall. For this review, I got to check out the second-generation Nest, which is 20-percent slimmer than its predecessor. Not only does it look good, but it doesn’t take any crazy tools and hours to get the thing installed. 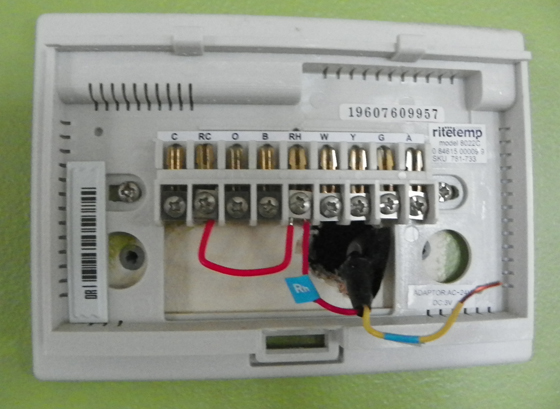 The carnage left behind by my old thermostat. Nest includes labels to mark your wires.

The Installation
Before removing unit, I turned the furnace off. (Don’t forget that!) The old thermostat popped off easily, but it’s important to note that you’re going to need to keep track of the existing thermostat wires. Not all thermostats will be the same. However, Nest is kind enough to give you little stickers to do just that.

Another nice perk is that the Nest comes with all of the hardware and tools to get the entire job done. That includes a little screwdriver, as well as a base, a trim plate and a steel plate. It also has screws that are designed to go into Sheetrock with no anchors.

Once the Nest is powered up, it will walk you through an on-screen setup. Choices are made right on the Nest, by turning the dial, and pushing it in to confirm actions.

You’re going to have to let the Nest know your preferred language, heating and cooling types (i.e. forced air), your location, the current date and time, the number of thermostats in the house, the number of inhabitants, when the home was last built or remodeled, and more. It will even ask you to name the thermostat and how low you want the temperature to get when you’re away. You’re also going to have to input your Wi-Fi password, if you have one (you should really have one), so have that info handy. Inputting that password and all other selections are done right on the dial, so it can be a bit of a tedious process. However, it’s a “set it and forget it” type of thing. Once it’s done, it’s done. 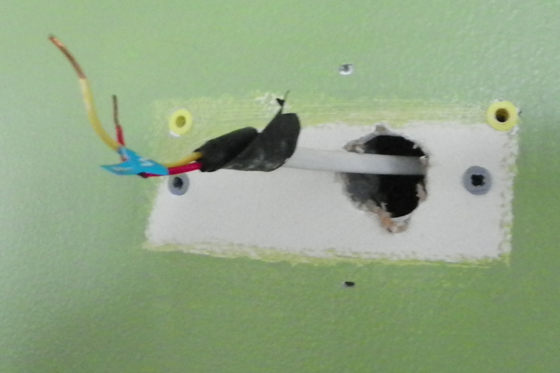 With the old thermostat completely gone, the wall looked bare — and kind of scary!

From there, the device sensed that we only have heat (sadly, there’s no central air in this house) and instantly connected to our system. According to Nest, this device is compatible with about 95 percent of the 24-volt heating and cooling systems out there, which includes gas, electric, oil, solar, hot water, geothermal, forced air, heat pump and radiant. Once connected to your home’s wireless network, it will also check outside weather conditions and adjust itself accordingly.

Well Hello There!
When the Nest is just hanging out, it’s in a hibernation mode. To wake up the device, just walk up to it. (My 6-year-old did this a lot.) The Nest’s face will turn red when it’s heating, blue when it’s cooling, and black when it’s doing neither. If you see a little green leaf underneath the temperature, that means you’re in an energy-saving mode. When you want to turn the Nest up or down, turn the face, similar to the setup process. Of course, you can also use the compatible iOS or Android apps, which we’ll get into later.

The hook on the Nest is that it can actually learn how you like things around the house. There’s no programming needed. After one or two days, the device seemed to figure out that we liked the heat to crank up to 68 around 5:30 a.m., and go down to 62 at 11:15 p.m. On the weekends, the heat would kick on a little later and little lower, easing into each day — just like my family does. It also has a new Auto Away feature, which can actually sense when you aren’t around and go into the Away mode. Of course, some days are going to be warmer, colder and more sloth-like than others, so you can adjust the temperature by turning the device or using one of the apps. 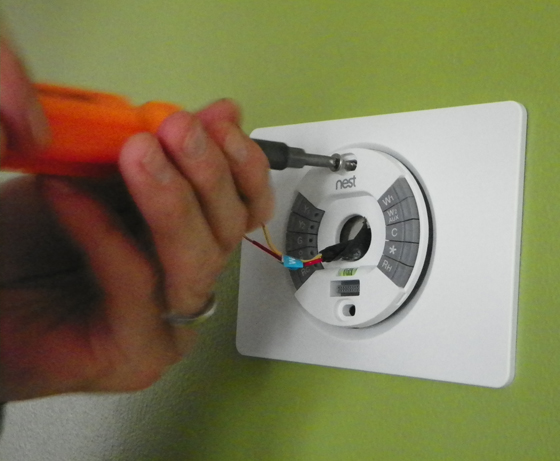 If your old thermostat was rectangular, use the included trim plate.

Although there isn’t much sparkle to a thermostat, it’s important to note that the second-gen Nest has some improvements over its predecessor — and most of them are things you’d never even notice. For instance, this Nest has a little something called System Match. This basically tweaks your heating and cooling, based on the type of system that you have. For instance, radiant heating doesn’t reach its perfect temperature in an instant and the Nest knows that. It will also adjust itself accordingly.

Apps Aplenty
One of the absolute best features of the Nest is that is has app-based controls, which are both free and easy. The Nest has free apps for both iOS and Android devices (including the Kindle Fire and Nexus 7), so users can tap into that temperature from the office, the car or even the couch. Yes, there were more than a few times where I adjusted the temperature from my couch — because I could! There were also times when I was exercising and needed to chill things down a bit, but didn’t want to lose my mojo. Coming home from a family event, I could tap into the Nest and heat up the house for our arrival. Hooray for app control!

Of course, the Nest isn’t the only thermostat that offers app control. Just last week, we listed some of the coolest and hottest smart thermostats currently out there, many of which have app control. However, the Nest app doesn’t require a contract or monthly fees and it doesn’t need to tie into other home control systems or equipment. It’s also insanely easy to operate. 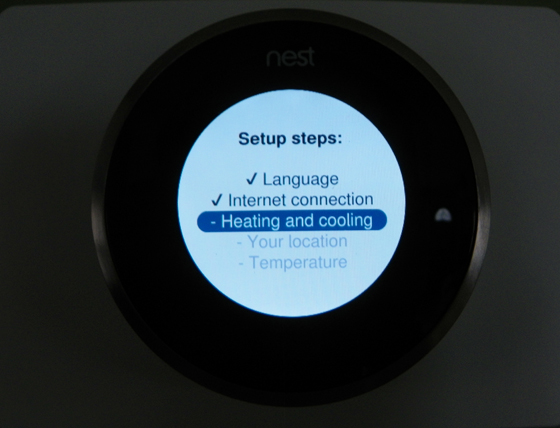 Once connected, all of the setup is done right on the Nest device.

Also, the Nest app could not be simpler. It’s very similar to the web interface, in that it shows a little picture of your house, with the current temperature setting. As reference, it also shows the current outside temperature. To adjust the temperature on the iPhone 4, it’s as easy as touching the on-screen dial and pushing the up and down buttons.

Turning the iPhone sideways reveals more options, such as the Away feature, general settings, Nest Sense settings for Auto Away, and a peek at the past 10 days of your schedule. There’s also an Energy History tab that shows when you are (and aren’t!) saving energy — and more importantly, why. This is sort of cool, as I noticed that there were days that we turned up the heat for the heck of it and others where weather was a factor. 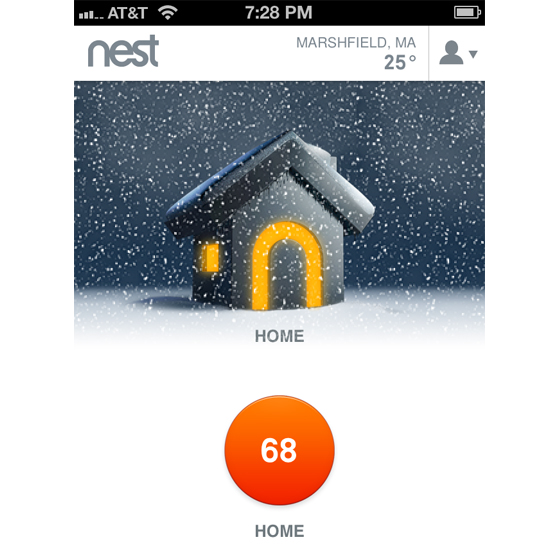 The Nest app is free to access and easy to use.

It’s also important to note that Nest is constantly working on updates. Because the Nest is connected to the web and has web-based interfaces, it’s easy to receive those upgrades as they happen. Good luck getting that with your old thermostat.

So…
Yes, the Nest is expensive, but you get what you pay for. It’s been installed in my house for a few weeks, so it’s hard to say whether or not we’re going to save money in the long run. However, I know we’ve pretty much weened ourselves off of all of the tweaking. Also, my family has agreed that it’s one of our favorite Electronic House features — at least for right now. 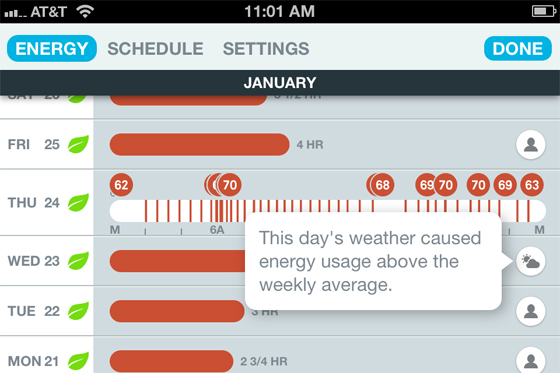 A peek at the Nest’s Energy History features on the iPhone 4.