We’ve seen a lot of smart thermostats tackle one specific area. However, if you want to control temperature all over the house, you typically need multiple thermostats. That’s not the case with the new ecobee3.

The latest from ecobee is a Wi-Fi thermostat that works in conjunction with wireless sensors around the home — up to 32 of them. Those sensors don’t just allow you to monitor temperature of various rooms in the house, but can also monitor if someone is present in those rooms.

According to ecobee, the new thermostat and the sensors can be installed in under 45 minutes with the help of an online video tutorial. The company also makes a professional installer option available.

Once connected, the ecobee3 can measure temperature and occupancy in multiple locations. That way, you can make things more comfortable when you’re home and maybe even more comfortable on your wallet when you’re not there. It even has remote functionality via an app for smartphones and tablets.

Other features include alerts and notifications, a black finish, a 3.5-inch capacitive touchscreen display, and an interface that promises to navigate like a smartphone. It also has something called “DataRhythm Technology,” which can automatically make a few heating and cooling decisions when you can’t.

“The industry has seen the introduction of new thermostats that seem modern, but have the same flaw that thermostats did 50 years ago — they only measure the temperature in one location, often the hallway,” said Stuart Lombard, co-CEO at ecobee. “The ecobee3 thermostat and remote sensors resolve this fundamental design flaw and deliver comfort to the rooms that really matter.”

The new ecobee3 smart thermostat will start selling on September 29, 2014. It’s priced at $249 and comes with one wireless sensor. Additional sensors will be sold in pairs, with an MSRP of $79. Available now on Amazon. 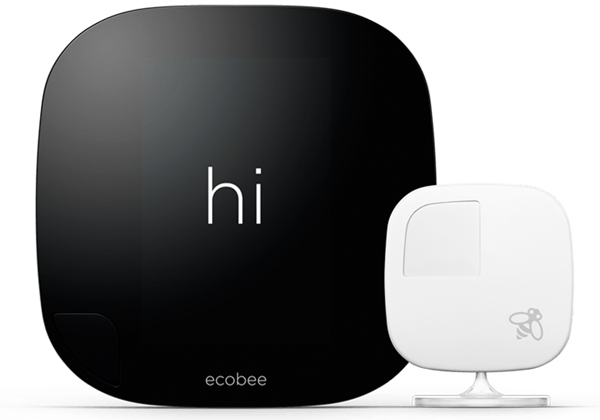 The new ecobee3 thermostat and one of the wireless sensors.