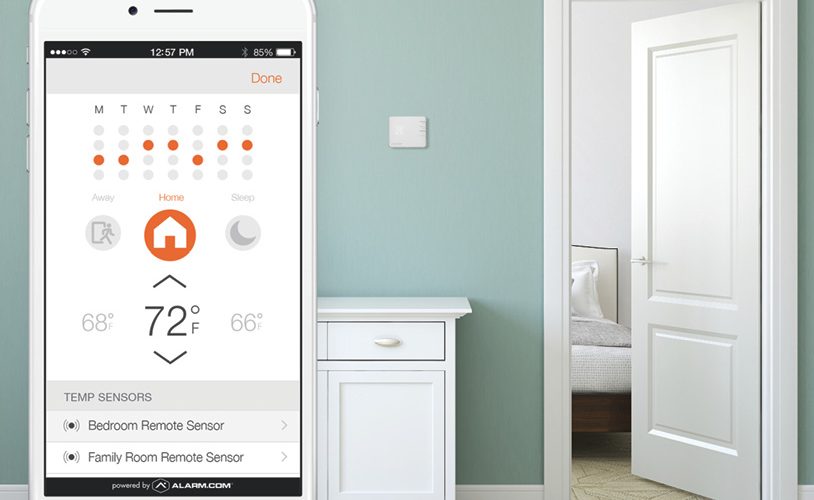 It’s the best of times for saving energy in your home. There are about a gazillion little Internet of Things (IoT) devices that promise to save you energy and connect to your home systems, your smartphones, and more.

Sensors seem to be everywhere today, but few people actually use them in their homes for the purpose of saving energy; instead, users focus on their ability to monitor the home environment for mishaps like break-ins and water leaks. But certain sensors are just as capable of making sure the lights are off, the home is being heated or cooled efficiently, and the grass is receiving just the right amount of water. Here’s a look at some of the most energy-conscious types of sensors around:

Using Sensors for Hands-Free Lighting Control
Eric Landis of All Sounds Design, of Grand Junction, Colo., favors occupancy sensors for completely hands-free lighting control. To prevent pets from tripping these sensors he recommends aiming them up or using masking labels to limit the “view.” He’s also discovered an effective trick for preventing a ceiling-mounted sensor from triggering when someone passes a room with an open door: Position the sensor near the doorway, so the header above the door acts as a mask.

1. Occupancy and Vacancy Sensors ($30 and up)
These are some of the most commonly used sensors to control energy usage in a home. They’re great for turning on and off lights in unoccupied areas. Occupancy and vacancy sensors differ, though. While both detect motion, vacancy sensors are used with lights that turn on manually, at the switch, and turn off automatically after a preset time. Occupancy sensors turn lights on automatically when you enter a room, and then off after a preset time. Most motion detectors in these sensors use either passive infrared (PIR) or ultrasonic technology, or use both in dual-technology sensors to reduce false alarms. (For some useful tips, see the sidebar)

2. Temperature Sensors
Perhaps the best energy-saving sensor in your home is a thermostat. A lot has been written about the advantages of the Nest thermostat, but there are other very good smart thermostats that act as great and innovative sensors, as well as energy-saving hubs.

For example, alarm.com’s new Smart Thermostat ($150) uses remote temperature sensors and features what the company calls “Multi-Sensor Learning,” which enables the thermostat to react and adapt to devices and sensors around the home to learn the needs of a household. One of the coolest features works with door and windows sensors to automatically set back the thermostat if a door or window has been left open. The thermostat also sends an alert to your smartphone.

If you’re thinking about using Apple’s emerging HomeKit ecosystem, the ecobee3 ($229) is designed for houses that have multiple rooms in need of climate control, and uses remote sensors to help it monitor the temperature in multiple rooms at the same time, allowing you to save energy and maximize comfort in every area.

3. Sunlight Sensors
We’ve been waiting for home-based sensors that can automatically close motorized window shades, and they have finally arrived. URC’s Light Sensor ($80), for example, works with the company’s Total Control home automation system. It mounts directly onto a window (inside on the glass) to monitor the amount of sunlight outside. Parameters can be set via the Total Control system so that the window shades will open and close according to the intensity of the sun. Another option is Lutron’s wireless Radio Window Sensor ($360) , which compensates for shadows, clouds, and bright conditions to adjust both a home’s lights and shades. The battery-powered sensor mounts to the window pane or mullions and works with Lutron’s HomeWorks QS lighting control system.

4. Humidity Sensors
What does a humidity sensor have to do with saving energy? It can turn your bathroom fan on and off, for starters, so that the fan operates only when necessary. Leviton’s Humidity Sensor and Fan Control ($40) replaces a single-pole switch and can also be used in basements and laundry rooms, where humidity can be an issue.

6. Smart Vents ($85)
One of the coolest new sensor technologies has to be from Keen Home. The company’s smart vent replaces the grill of an existing air duct and senses the temperature and duct pressure to close its louvers when heated or cooled air isn’t needed. This effectively turns a room into an independent heating and cooling zone.

7. Water Sensors
Water requires energy to pump into and throughout a home. Many homeowners who live in California and other drought-stricken regions are already familiar with smart irrigation systems that employ sensors to detect moisture and evapotranspiration. By monitoring these two conditions, the irrigation system knows when to water the grass and when not to. Popular and reliable systems are available from Rain Bird, Hunter, and others.

There are also a host of little smart plugs that can turn devices like lights and appliances on and off automatically and read the power usage. There are garage door sensors, driveway sensors, and sensors built into appliances like washers and dryers to stop cycle times and use less energy. Home control system manufacturer SmartThings even has a Presence Sensor ($31) that can alert you to the location of pets and kids—and connect with other SmartThings devices to turn off the lights, for example.

And this is just the beginning. Expect the development of many Internet of Things devices, systems, and multi-faceted sensors to continue, including a Sensor Block multi-sensor ($65) from WigWag which can detect motion, temperature, humidity, noise, vibration, and more. Elgato’s Eve ($40 to $80) sensors, meanwhile, have been engineered to collect data on humidity, temperature, air pressure, and air quality levels so you can affect change. We’ll soon see how much stuff coming out of the IoT cloud is real or just vaporware. Hmmm, I wonder if there’s a sensor for that?… EH

Steven Castle: is a freelance writer and editor. He has covered home technologies for more than 20 years, and also writes about green tech and design. www.stevencastle.com