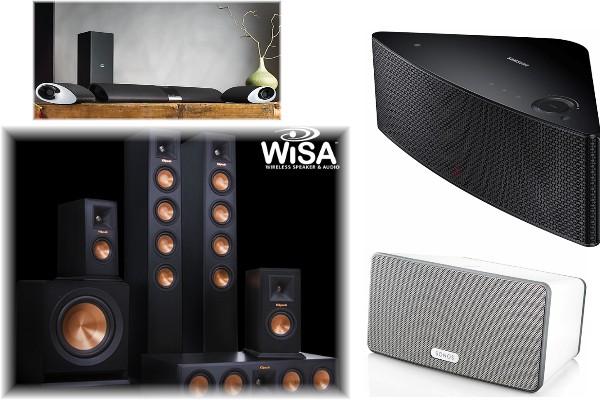 It can be easy to conceal wires near or behind the A/V cabinet. However, when it comes to surround sound, you want those speakers spread out around the room. Running speaker wire inside the wall isn’t always an option and having wires run across the floor is both ugly and dangerous.

Forget tiptoeing and tripping over wires. Surround sound has gone wireless! This option makes placement easy—and isn’t permanent, which is a nice perk if you want to move the system at some point.

What Makes Them Wireless?
How sound gets from point A to point B may vary, depending on your product. For instance, Bang & Olufsen currently has one of the few WiSA-certified speaker systems out there (a Klipsch system is coming soon, see below). Sonos, on the other hand, creates its own network using your existing Wi-Fi setup.

Many of the wireless surround sound options on our list have all of that goodness packed inside the speaker cabinet. Others require some type of transmitter and receiver combo.

Doesn’t Wireless Make Them Inferior?
It’s important to remember that most wireless speakers are not technically wireless. They do need a transmitter and receiver, although these may be built into the speaker. If that’s the case, they typically need a power source. So that’s a cord for you. However, it shouldn’t be a cord that sticks out like a sore thumb, making for a much neater setup.

Of course, many audio fans often relate wireless with being unreliable or inferior. There are absolutely plenty of junky wireless speakers out there—and some are made by respected manufacturers. However, wireless surround sound has gotten significantly better thanks to improved technologies and higher quality products.

What Are My Options?
There seems to be endless options for wireless speakers and even wireless subwoofers. However, the category of wireless surround sound is still on the small side. That said, there are some really interesting options out there, with more on the way.

If you have a specific manufacturer, technology or budget in mind, those factors may pick your surround option for you. However, there are other things to ask yourself:

1. Do I want to add onto an existing setup or buy a complete theater package?
2. Do I want to use existing wired speakers as wireless surrounds?
3. Do I have a power outlet near where the surrounds will go?

Do you want a complete home theater speaker system without the bother of an AV receiver or any wires? That’s what the Klipsch Reference Premier Wireless Home Theater promises. The speakers work on the WiSA wireless audio standard and require a small wireless hub (which includes the transmitter plus all the inputs you need for your TV and components—and there’s even Bluetooth). Each speaker has its own built-in wireless receiver that gets the channel signal from the base transmitter. Setup is easy. You can configure the system as a 5.1, or 7.1 system (it also allows for multiple subwoofers) and supports 24 bit/96kHz audio. The wireless speakers of course need to be plugged into AC outlets. The speakers are designed according to Klipsch’s Reference Premiere acoustic technologies. You can select from bookshelf, center, subwoofer and tower speakers. A 5.1 system made up of two front towers, two bookshelf speakers, a subwoofer and center channel, plus the hub transmitter, will cost about $5,000.
More information: Klipsch

Offering the best of both worlds, this full 5.1-channel home theater system has two 47-inch, 3-way, 3-driver speakers, a 2-way, 3-driver center-channel speaker, and a 7-inch subwoofer—all of which are wired. However, the setup has a built-in transmitter to stream music to the system’s two wireless rear speakers. Boasting 1,000 watts total, the system also includes a 3D Blu-ray player with built-in Wi-Fi, Bluetooth with one-touch NFC pairing, and access to web-based services like Netflix, Hulu Plus, Pandora, and more. MSRP: $699.99
For More Information: Sony

Sonos is very well known for its full range of wireless audio products. Designed to work vertically or horizontally, the PLAY:3 packs in one tweeter, two mid-range drivers, one bass radiator, and three Class-D digital amplifiers. Users can stream all sorts of musical content to one or more speakers from any connected smartphone or tablet. However, when it’s paired with the Sonos PlayBar and the SUB, the system can create its own Wi-Fi-based network, as well as a complete home theater with slick wireless surrounds. MSRP: $299 each
For More Information: Sonos

Here’s something we’ve never seen before. At first glance it’s a standard soundbar with a wireless subwoofer, will is a big improvement over a TV’s standard speakers. However, Philips knows that there are times when you really want the extra immersion that real surround sound provides. For those times, the ends of the soundbar actually come off and can be used as wireless surround sound speakers. When you’re done watching the movie, simply reattach the end units to make a whole soundbar again. Pretty neat idea. Price: $320
More Information: Philips

Like the larger, previously released Shape M7, this newly announced speaker can put wire-free music in any room in the house. That magic happens via Bluetooth connectivity with Near Field Communication (NFC) for instant pairing. It can work alone or with other M5 and M7 units. However, when paired with select Samsung soundbars, it makes for a nice wireless surround sound option. It can also be used with a variety of other products, including legacy audio components like turntables or CD players, via the $350 Link Mate add-on. MSRP: $144.99
For More Information: Samsung

Like Klipsch above, B&O announced the very first WiSA-certified speakers, under the “Immaculate Wireless Sound” brand. The new line was part of a collaboration between the company, the WiSA Association (Wireless Speaker and Audio Association) and Summit Semiconductor. The end result not only produces wireless surround sound, but can also do 24-bit uncompressed music. It works in the 5.2-5.8GHz range, which can power anything from a pair of speakers to a full 7.1 surround system, all without wires. At last peek, the B&O website listed the BeoLab 17 (pictured), the BeoLab 18 and the BeoLab 19 as current Immaculate Wireless Sound options.MSRP: $3,990 to $6,590
For More Information: Bang & Olufsen

Love your existing speakers? So does Amphony. In fact, the company doesn’t want you to toss those favorites just because you’re looking to go wireless. Instead, this wireless audio transmitter can turn any speakers into wireless speakers. The Model 1600 has two separate 80-watt wireless amplifiers for each speaker. The transmitter is what sends the music at 5.8GHz to those amps, up to 200 feet. MSRP: $199
For More Information: Amphony