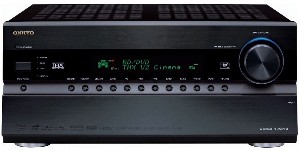 Power Output
Power output should be one of the first features you look for when selecting a home theater receiver. You’ll want enough power to fill your room and juice your speakers, but don’t just look for the biggest numbers. Power ratings are described in watts per channel, each channel being one speaker, but not all watts are created equal. Ideally, look for high power measured at low distortion (usually between 0.02% and 0.08% THD (total harmonic distortion). Power is also measured at a certain impedance, or electrical resistance. On most receivers you’ll see impedance measured at 8 ohms; make sure that number matches the impedance of your speakers. A typical power specification may look like this: 100 watts x 7 into 8 ohms (20-20k) at 0.05% THD. Some manufacturers will only list a “maximum” power specification which is not an accurate reflection of what the system will deliver for you.

So how much power will you need? That depends on several variables. Some speakers are more sensitive than others and will therefore require less power to drive to the same volume as less sensitive speakers. Similarly, a small room won’t need the same 200-watts- per-channel that a 20-seat theater does.

Speaker Outputs
How many speakers do you need? For a proper home theater, you must have a minimum of 5 speakers and 1 subwoofer (5.1), but many people opt for the fuller experience of a 7.1 or 9.2 system. Often with a 7.1 receiver, you can set up a 5.1 home theater and use the additional two channels as stereo speakers for another room.

Ports and Terminals
While feeding audio signals to speakers is one of the primary jobs of a receiver, it’s the inputs that bring home theater systems together. The receiver acts as the interchange that lets all the signals come in, then directs them to the proper place.

If your system components are all fairly new, then most will rely on HDMI (most will have version 1.4a by now, but you should look for HDMI 2.0 with HDCP 2.2 DRM copy protection to support new Ultra HD content). A minimum to consider would be a receiver with 3 HDMI inputs (for a Blu-ray player, cable box and game console) and one HDMI output. A home theater with more components (Ruku, Apple TV, multiple game consoles…) will obviously require a receiver with more inputs. Other audio/video inputs include digital optical and coax, plus analog stereo inputs. Additionally, if you have older components, then you’ll need analog inputs, such as component, composite and S-video.

For ease of installation, the speaker terminals on the back of home theater receivers should be clearly labeled and allow enough finger space for connecting and tightening the speaker wire.

On more fully-featured receivers, expect to find additional inputs like Ethernet, USB, additional AC power outputs, RS-232 for connection to a control system, IR ports to support a remote control, and pre-amp outputs for sending signals to an additional amplifier. IP control compatibility is increasingly becoming important as well. A few newer receivers even include Ethernet switches, which is convenient if you have multiple streaming devices in your system. Do you want to listen to vinyl records? Then a phono input may be in order. A few front panel inputs can be helpful, too, for quick connections to USB hard drives, video cameras and gaming consoles.

Audio Processing
There was a time not so long ago when audio processing was not terribly complicated. Most all DVDs were in Dolby Digital, sometimes DTS. Now there are multiple audio formats, so your receiver should be capable of handling all or most of them (they keep changing, so there’s a good chance that once you take your receiver out of the box, another new codec will be released). In addition to the various Dolby and DTS decoders, many receivers include a variety of surround-sound modes and processing settings. High-end models often include THX certifications, which signify that the product meets certain reference standards.

Video Processing
Because today’s receivers can handle more than just audio signals, video upconversion can frequently be found on better products. Video processing chips from Marvell, HQV, Anchor Bay and others will scale signals to 1080p or even up to 4K and allow you to adjust a number of video settings for the best picture.

Setup and Calibration
Let’s be honest: Setting up a receiver can be confusing. Many manufacturers are taking some of the guesswork out of the process by incorporating auto-calibration features into their products. Included with an auto-cali-bration receiver is a small microphone. When it’s in its setup mode, the receiver transmits a series of test tones from each speaker while the connected microphone records the levels so that the receiver can make the necessary adjustments. The result is a perfectly balanced audio system, and all you had to do was press a button.

Multizone Distribution
Most good receivers can distribute audio and video signals to several independent listening and viewing zones (rooms). Some receivers come with an extra set of line level stereo outputs, which will require a connection to an additional stereo amplifier or active speakers. Other units will have additional amplified speaker terminals to support multiple zones. Many also offer additional video outputs so you can send audio and video signals discretely to other zones, like to the back yard or the dining room.

Remote Control
While the receiver is the brain of a home theater system, the remote is really in charge. Basic receivers come with basic remotes, which often can be frustrating to use. Better products include universal learning remotes capable of handling the control functions of all your gear. Many incorporate HDMI:CEC, a protocol that allows all HDMI-connected products in a system to be run by one remote. Unfortunately, HDMI:CEC is only a basic standard and may be implemented differently across brands. The best products come precertified for compatibility with advanced control systems, which require professional installation. Nearly every new receiver will also have a compatible iOS and Android app that permits some level of control. These are usually good as secondary or backup remote solutions.

Extras
If you’re looking for more than just a place to plug in a host of audio and video components, check out the list of extra features available on many receivers. The most commonly found feature is iPod/iPhone/iPad connectivity. Other features sometimes found on receivers include the ability to stream content from a PC and the Internet. High-resolution DACs for playing higher-quality audio files is also a plus.