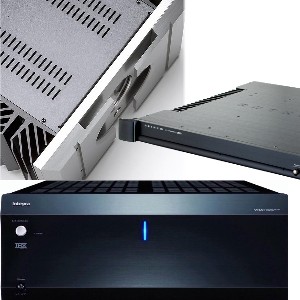 In an age of earbuds and phone stereos, few souls besides audio gourmands know or care much about home audio amplifiers. But once you take the sound out of your ears and put it into your room, amps are the necessary muscle behind the music.

Audio amplifiers differ from each other in much the same way that TVs do. For example, an LED, LCD and plasma set will all play you the same picture, with varying degrees of accuracy. But each technology has its own characteristic way of getting the job done. One TV will have more overall light available to work with. One might be built to give you more screen size for the same money. One will consume less energy. One will be more stable against variations in your home’s AC voltage fluctuations. And so on.

So it goes with audio amplifiers too. Amplifiers for home speakers use several different technologies to get their jobs done, and as with the TV technologies, they’ve all got their pros and cons. Whether you’re shopping for audio separates or integrated receivers, it’d important to understand the differences in the various amp styles you’ll come across.

(If you’ve got a lot of time on your hands, there are over 1200 technical papers at the Institute of Electrical and Electronics Engineers (IEEE). offering full technical description of each of these amplifier styles.)

Class A Amplifier
This power hungry system was one of the earliest speaker amplifier technologies, and had largely fallen out of the mainstream market back in the 1970s, when transistors began to replace tubes. Audio purists who were dissatisfied with the sound of “solid state” stuck with Class A, which today you’ll not only find in tube amplifiers from companies like Conrad Johnson, VTL and Audio Research, but also among some very high-end solid state amplifiers from maverick companies like Pass Labs, and legacy models from Krell and Bedini.

This amp technology can best be described by saying it analyzes and amplifies the full 360 degree cycles (positive to negative) of the incoming audio waveforms in absolute real time. To be able to do that, it’s pretty much running at full power all the time. Whether the music you’re listening to is soft, loud or anywhere in between, the amp is using all of its available energy 100% of the time to reproduce it.

Class B Amplifier
When audio engineers and designers started looking at more efficient ways to create sound than the old fashioned vacuum tube, they developed a method called Class B. Instead of looking at the entire 360 degrees (crest and trough) of the audio waveform at one time, it divided the job into 2 parts, one for the positive and negative half of the waveform cycle. Two stages, then, were necessary to do the job, one to “push” the waveforms halfway, and another to “pull” the signals the other half way.

On this design, the engineers won but the audio lovers lost. Pure Class B amplifiers distorted audibly when switching from push to pull, and this design was largely abandoned for the audio market. However, some of its spirit remains in the most popular amplifier technology today, the AB.

Class AB Amplifier
In the quest for balance between great sound and mass marketability, engineers developed the Class AB audio amplifier. This is more or less a class B amplifier which has a small amount of pre-determined current (known as “bias”) flowing through the output transistors at all times. This technique theoretically eliminates the switching distortion of Class B because now there’s always some juice smoothing the transitions between full positive and full negative on the waveform.

Class AB amplifiers were for many years the standard design by which virtually every mainstream amplifier and receiver was built, ranging from budget models and HTIBs from the likes of Onkyo, Sony and Harman Kardon, through muscle A/V receivers from Denon, Yamaha and Pioneer, to stand alone separates ranging in scale from NAD to Bryston to Anthem and Mark Levinson and beyond.

Pros:
– Sound quality can be superb; many of the best amps use Class AB.
– Efficient, a very broad range of speakers can be used.
– Cost effective; lets makers jam multiple amp channels in a single box.
– Hassle-free; this is one of the least likely components to fail.

Cons:
– Sound quality varies greatly by factors well beyond the basic AB design.
– Can be heavy and bulky, separates can weigh 75 lbs. or more.
– Relatively little difference in sound between most mid-line models.
– Old school technology that may not be around much longer.

Class D Amplifier
The latest technology in amplifier design is Class D, which has generated a lot of emotions on both sides of the art vs. commerce divide. Often mistakenly referred to as a “digital” amp (hence the D), not all Class D amps are, strictly speaking, completely digital, though there’s definitely a lot of digital signal processing going on.

Class D is an incredibly efficient way of amplifying audio. In essence these amps generate their own waveform (a square wave, to be exact) which divides the frequency portion of the audio spectrum into sounds you can hear and sounds that are too high to hear. There’s still the same kind of positive-negative waveform treatment going on, except that the negative portion is now basically made up of unused high frequency signals. So in theory, by interpreting half the wave form (as a Class B or Class AB does) as the full wave form, and using what is in essence a “dummy” circuit to complete the cycle between positive and inaudible negative, you’d theoretically get the best of both worlds—clean, linear sound and efficiency that’s so good you can make the amps super small. These amps also generate virtually no heat—the enemy of all things electronic.

So do Class D amps earn a better sonic grade than their name would suggest? Depends who you ask and what kind of amp you’re talking about—there are great variances in quality and approach, just as with AB amps. This is a technology that is still in the process of proving itself, but in addition to super compact budget gear, esteemed audio stars like Rotel, Jeff Rowland and Bel Canto have already jumped on board.

Pros:
– Super efficiency, produces virtually no heat or lost energy.
– Can be made extremely small, allows for compact components
– Terrific bang for the buck is possible in terms of watts per dollar
– Extremely green, very low energy consumption.

Cons:
– Still a new-ish technology, many variations exist.
– Very broad range of performance quality, from sub-par to sublime.
– Audiophiles complain about thin dynamics and lightweight bass.
– An evolving technology that will likely get better as time goes by.

So which of these amplifier technologies is the one that’s right for you? It’s like the TV—the technology doesn’t matter so much as the end result. If you like what you hear, you’re buying the right amplifier.