Soundbase vs Soundbar: Which Speaker Style is for You? - Electronic House ​​
Audio News and Information 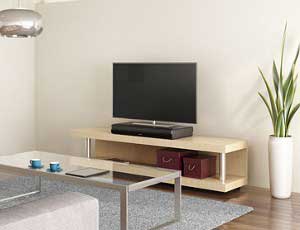 So you’ve decided that a surround sound receiver and 5.1 or 7.1 speakers spread around your media room is not how you want to experience home theater. Maybe you rent your home or apartment and can’t install wires. Maybe you just don’t like the look of multiple speakers or don’t have room for a large AV receiver—whatever the reason, soundbars and soundbases are excellent alternatives to full multi-speaker systems. The next question is: soundbase vs soundbar.

A couple of years ago a soundbar was almost the only option for people who didn’t want multiple speakers in their media room. Since then the soundbase category has risen sharply, so buyers are faced with the decision—which is better?

How are they different?

Soundbars are long narrow speakers that usually are hung on the wall under the television. The number of separate speakers inside a soundbar cabinet can vary, but most have at least three. Often soundbars come with separate subwoofers (usually wireless) for extra bass.

Sound bases, or TV speakers, on the other hand, are much thicker and meant to rest on a table or cabinet underneath the television. They come in different sizes and are usually rated by how heavy a TV they can support. Often in addition to the main speaker drivers in the front, a soundbase will have addition base drivers underneath for extra bass. This means that a soundbase usually doesn’t require the addition of a subwoofer.

Soundbase vs Soundbar: Benefits of Soundbars

The main benefit of a soundbar is the sound. Soundbar speakers emerged as an answer to the lousy sound quality of the speakers built into TVs. As TVs got thinner, their speakers got worse.

Soundbars are versatile because they can be hung on a wall with your flat panel TV or placed on a stand in front of the TV. Sometimes on a table the TV’s base can get in the way of soundbar placement, or large soundbars can block the TV’s remote IR sensors. Also, most soundbars are tuned for wall hanging, which means they can sound a little different on a stand than on the wall.

The current trend in soundbars is to make them smaller and slimmer. Many new models are only a few inches thicker than the flat panel TVs they’re meant to be matched with. The result of the slimming down is that the drivers also are smaller and unable to produce much if any bass. That’s why nearly all soundbars now come with wireless subwoofers. Sometimes those subwoofers can be placed anywhere that’s convenient in the room, but if the built-in crossover is set very high, then the sound from the sub becomes directional—you can tell where it’s coming from. If voices or other sounds are coming from the sub when they shouldn’t be, the solution is to place the sub up front as close to the soundbar itself as possible.

Soundbase vs Soundbar: Benefits of Sound-Bases

Many of the things that make soundbars a good solution for poor TV speakers can also be said for TV pedestal speakers or sound bases, but there are some key differences.

First, if you have no intention to hang your TV on a wall, and you don’t mind the soundbase raising the TV height a couple of inches, than a base is probably a better option. Because soundbases have more room in the cabinet, they tend to have larger drivers, better built-in amplification and the ability to include bass drivers. If you don’t want to use a separate subwoofer but want decent bass, then consider a soundbase over a soundbar.

Like the trend mentioned with soundbars, some manufacturers are making their soundbases very thin as well. This seems to go against the main benefit of a soundbase, so always listen to the product before you buy.

Some features to look for:

All soundbars and soundbases will include an optical digital audio input which is meant to be connected to your TV’s ARC (audio return channel). Some will include HDMI and stereo analog inputs. HDMI is a nice option, so look for it.

Better soundbar systems will include built-in support for Dolby and DTS audio processing. Some even feature Dolby TrueHD and DTS Master Audio processing.

If you want to use only one remote, look for a speaker that either has an IR pass through feature or can learn the IR commands from your TV’s remote. If you’re using a speaker with HDMI-CEC than the TV remote may automatically control the speaker. If all else fails, a programmable universal remote can replace both the TV and speaker remote (as well as your DVR and Blu-ray player remotes). Some speakers may even come with their own apps that offer more advanced control.

Wireless connectivity for smart phones and tablets is a popular and useful feature. Most products come with Bluetooth, though a few also include Apple AirPlay or DLNA to allow you to play music from your phone, tablet or computer over the speakers.

Many soundbars and soundbases omit a front display panel because some users think the light is distracting. On the other hand, having a display which tells you what mode or input the speaker is on and what the volume level is, can be very useful.

Soundbars and soundbases aren’t perfect replacements for proper surround sound systems. They lack the robust audio processing of an AV receiver and the detailed placement of separate speakers. However, if a multi-speaker system isn’t an option, these speakers will significantly improve the audio experience of your TV watching.