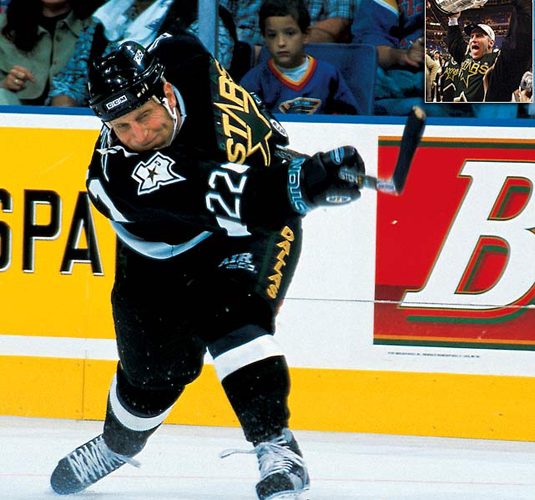 Brett Hull followed in the footsteps of his father Bobby, all the way to the Hockey Hall of Fame. However, when it comes to home technology, Brett has an all-star lineup that stands out on its own, with whole-house control, custom audio speakers, and plenty of other components.

Brett and his wife Darcie own a 10,000-square-foot home located in Clayton, MO, a suburb of St. Louis—and it’s packed with high-tech audio equipment.

“Brett loves music and he loves to play it really loud,” says Tommy Kissell Jr., owner of Eco High Fidelity, a Texas-based company that had previously helped the couple out of an AV jam in Dallas.

To achieve that loudness but keep it crisp and clear, the couple has a whole house full of custom-built Triad audio speakers, an Anthem surround receiver, and three Elan S1616A multizone audio controllers that can deliver music to 18 separate zones. All of those audio goodies can be accessed through the home’s six Elan HR2 remotes or the Elan g! mobile app on the family’s iPhones and iPads.

However, despite the system’s ease of use, this wasn’t an easy installation. “There were high expectations from the start, as the clients had lived through audio/video systems that had never met their standards,” Tommy says. “Their previous system was plagued with service issues and required constant maintenance. The challenge of exceeding their expectations from hundreds of miles away in Dallas required a specific set of skills and detailed planning.”

It also required an alliance. Eco High Fidelity worked with their own all-star team, which included Fusion Media Systems, a local integration firm that handled the pre-wire, the speakers and the low-voltage work that required somebody with local certification. Builder Higginbotham Custom Homes & Renovation and designer Sohaila Danesh were also heavily involved in the project.

“The keystone of any successful project is collaboration,” Tommy says. “Anytime we are working out of town, there is a process of familiarizing with the members of my team and the builders. In this case, we were the out-of-town guys, unaccustomed to the standards of the builder and the methods of the other subcontractors. In the audio/video world, our technology touches almost every part of the house and without collaboration nothing comes together.”

Eco High Fidelity put a plan together based on the Hull’s wants and needs. Then, they needed to join forces with everyone involved, as well as install the actual equipment. “The Hull project is a great example of how three companies that could be competitors became colleagues working towards a common goal,” Tommy says.

Collaboration was definitely key here. Besides the sheer size of the project, the Hull’s house is a landmark—and not just because it’s where this two-time Stanley Cup winner resides. The place is 105 years old, so there were certain things that could not be touched.

“It’s a four-story, century-old home that is literally a historic landmark,” Tommy says. “We knew it was going to be the retrofit from hell.”

To tackle the home’s limited in-wall and in-ceiling access, as well as preserve the integrity of the existing walls, the Fusion Media team wired the main floor speakers near the floor. Now, they just needed a system that was easy to operate and could also handle the family’s 250,000-track digital music collection.

“I’ve had a lot of clients like Brett and Darcie say, ‘I’ve learned to live with it,'” Tommy says. “In our industry, those are the worst words we can hear.” So instead of giving the couple something complex, Tommy immediately suggested Elan g!

Elan g!, along with Pakedge wireless products, provide the family with a foolproof system. Tommy says that this combination can deliver instant, reliable access to all of the Hull’s media. It also allows Eco High Fidelity to fix problems remotely from Dallas.

“Brett and Darcie Hull are simple folk in the fact that they just want to come home and have it work,” Tommy says. “They travel a lot, so when they come back in town, they don’t want their first call to be with an AV guy.

“I can log into the Elan system or the Pakedge network to reboot hardware, check and upgrade software, and see exactly what the Hulls are talking about in case of regular maintenance issues. That will save me and them thousands of dollars over the life of the home, because I don’t have to fly someone out.”

All of the aforementioned equipment (and more) lives in the basement in two custom-built Middle Atlantic racks. Besides all of the Elan goodies, the home has an S1Digital Music Server with a terabyte hard drive to accommodate that massive digital library, as well as Spotify, Pandora and SiriusXM. An Atlona 8-zone video matrix handles switching the lineup of HDMI sources, which includes multiple ATT DVRs and Apple TVs, as well as a Kaleidescape movie/music system. The sources can be accessed through the Elan g! system both indisunvidually or in groups.

Of course, Brett and his family do watch movies—and even the occasional hockey game. The home currently has seven video zones with TVs ranging from 40 to 80 inches. There’s also a finished space in the sunroom, which features an 80-inch Sharp HDTV, a custom-built Triad soundbar, four floorstanding surround speakers, and a custom-built subwoofer. Eco High Fidelity is also working to finish up a media room on the fourth floor.

The couple’s favorite perk is still the audio, though. Almost every room on the first and second floors is completely covered in custom-built Triad bookshelf, floorstanding and in-ceiling speakers. “Every speaker in the house was custom-built to be a specific type of white color to match the interior designer stuff,” Tommy says. “That exercise was fun. I never knew there were so many colors of white.”

The outside gets its share of audio as well, thanks to the reach of the Elan system and a set of Niles Audio speakers that were already installed—and barely used. (“They were truly never even broken in,” Tommy says.) Instead of swapping them out, Eco High Fidelity bench-tested them and gave them a little boost, by outfitting them with the proper power.

For an iconic hockey player known as “the Golden Brett,” only the best will do. This install certainly delivers the gold standard in audio, which Tommy says he owes to the team, as well as the clients.

“Growing up in this industry, I am still blown away by the technology we get to work with. But it is the quality of the client, the collaboration with colleagues, and the results of my team that will keep me in this industry for life. The Hulls are the best type of clients. They treat everyone they encounter with a warm welcome and value long-term relationships,” he says. “Not to mention, they love technology and music. There is no greater pleasure than our clients wanting to be at home. And it is an exciting time for home integration. Builders, designers and integrators are creating amazing systems all over the world, and we have hardly scratched the surface.”

Want a better peek at this NHL icon’s house? Get a front-row seat by clicking through the slideshow below.