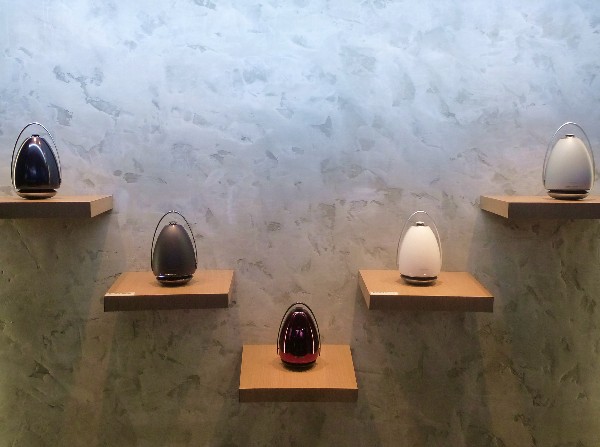 Nobody wants to be restricted to wires anymore, so wireless speakers are proliferating, making music anywhere an easy thing to achieve. At the Consumer Electronic Show this month, wireless speakers were everywhere, from large companies to small, and in a variety of designs and technologies.

Here are some of the wireless speakers and audio systems that stood out at CES this year.

Samsung already has a line of wireless speakers, called Shape, that are essentially like Sonos in function. The creative WAM7500 and WAM6500 are a completely new concept. They project sound not in one direction, but in 360 degrees to fill a whole space with only one speaker. The trick is achieved with a “ring radiator” driver developed in Samsung’s new audio lab in California. The WAM7500 (shown) can sit on a stand or be hung from the ceiling the way they were at CES. The WAM6500 (top) is a small tabletop version and has a built-in battery for portability. The speakers get their audio signal via WiFi and can connect directly to a smartphone.

LED light bulbs, apps and music might seem like three things that don’t go together, but ION has combined them into a smart product that can light your home and deliver music around the house. The Sound Shine LED light bulbs connect to a smart phone through Bluetooth. With the Sound Shine app a user can turn on/off and dim the bulb, but also send music to it. The bulbs come in a pair and can be linked for a stereo experience or they can be installed in two different rooms for multiroom audio. The light itself is equivalent to a 60 watt standard bulb, but since it’s an LED light, it can last more than 20,000 hours.

Paradigm has come out with a multiroom wireless speaker system in the company’s Shift collection. The set includes a large speaker, the PF800, which can fill one whole medium-sized room, the smaller PF600, which looks ideal for a den or office and the PF AMP, which includes speaker terminals so you can use your own speakers. The system uses DTS Play-Fi technology and the Play-Fi app to deliver music to the speakers via WiFi. The collection will be available in Spring 2015.

The SR2 is the latest addition to the Polk Omni wireless speakers announced last year. What makes the S2R stand out is that it’s weatherproof and battery-powered for outdoor use (you can also plug it in). The Omni speakers use DTS Play-Fi wireless technology. Because the S2R is meant for outside use, it includes an external antenna rather than the hidden internal antennas in the other Omni speakers. This is the first time we’ve seen an outdoor speaker as part of a wireless multiroom audio system, and it’s a welcome addition. The Omni S2R will run you $249.

Do you want a complete home theater speaker system without the bother of an AV receiver or any wires? That’s what the Klipsch Reference Premier Wireless Home Theater promises. I spent some time listening to the system in a demo room at CES, and I assure you, it’s awesome. The speakers work on the WiSA wireless audio standard and require a small wireless hub (which includes the transmitter plus all the inputs you need for your TV and components—and there’s even Bluetooth). Each speaker has its own built-in wireless receiver that gets the channel signal from the base transmitter. Setup is easy. You can configure the system as a 5.1, or 7.1 system (it also allows for multiple subwoofers) and supports 24 bit/96kHz audio. The wireless speakers of course need to be plugged into AC outlets, but you don’t need to run speaker wires all across your room. The system comes with a remote for volume and input selection, and there’s an onscreen display and menu if you want to really tweak the speakers, which are all designed according to Klipsch’s Reference Premiere acoustic technologies. You can select from bookshelf, center, subwoofer and tower speakers. A 5.1 system made up of two front towers, two bookshelf speakers, a subwoofer and center channel, plus the hub transmitter, will cost about $5,000.