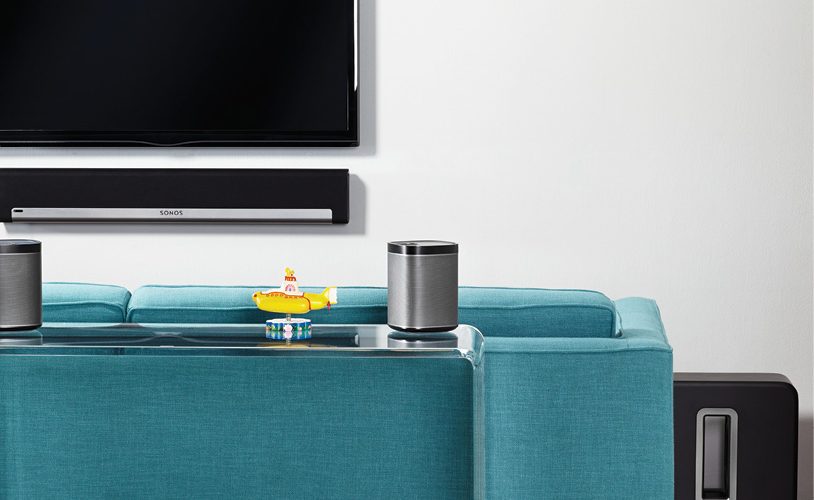 BLUETOOTH AND AIRPLAY BOTH UTILIZE your smartphone, tablet, or PC as a source. It is better to think of them as a wireless solution for one of those devices. Bluetooth can’t support more than a stereo speaker pair, while AirPlay can send music from the same source to many speakers but not different music to different speakers. Listening to more than one source will require additional AirPlay devices.

By contrast, whole-home audio systems from Sonos, Denon, Bose, and others can support many rooms and devices, and are able to function as their own music source. With a system like this, your smartphone or PC works as a remote control instead of a source of music. You select your music and then the speakers play it back straight from the Internet or your local network, instead of directly from your mobile device.

Whole-home audio systems also let you configure your audio system into specified rooms, or zones, for playback. You can control each zone from a mobile device and every family member can access their own content to hear in a specific zone. You can combine zones to create a Party Mode that will allow you to listen to the same music in every single room. And should you want to add a zone? Just buy a single wireless speaker and set it up through the app.

The downside: Whole-home audio systems usually can play only the streaming services they have built in. In contrast, Bluetooth and AirPlay can stream anything your smartphone or computer can. It’s possible to add AirPlay and Bluetooth to some whole-home audio systems by adding extra hardware. Also, be aware that these systems are almost always proprietary. For example, you cannot buy a PLAYBAR from Sonos to combine with a speaker from Bose or Denon. Once you invest in a system, you’re tied to that brand for every other music zone you wish to add.

Two new standards have the potential to eliminate this shortcoming by enabling products from a variety of manufacturers to work together: Play-Fi and AllPlay. Play-Fi is from DTS, and Definitive Technology, Polk Audio, and Phorus will bring some of the first Play-Fi products to market. AllPlay is from Qualcomm, and initial products are being introduced by Monster.

The Wireless Speaker & Audio Association (WiSA) is another technology designed to replace the standard A/V receiver of a home audio system. It supports up to 7.1 channels of 24-bit, 96kHz audio, so it can play back lossless Blu-ray soundtracks. It uses a special frequency band instead of the standard Wi-Fi frequency, which makes it less prone to interference and break-ups. Lastly, it is an open standard, which means speakers from one company will work with those from another company. Bang & Olufsen, Sharp, Klipsch, Dali, and Anthem are some of the manufacturers that support this standard.

Finally, proprietary wireless speaker systems, like the Dynaudio Xeo, are an option. With a system like this, a small transceiver connects to your existing stereo or TV and then sends audio to the Xeo speakers. Unlike the other wireless systems, this is a multi-box arrangement that is harder to pick up and carry to a different room. It also currently supports only 24-bit, 48kHz audio, so it isn’t the best choice for listening to high-resolution content.

Some wireless systems can scale in size while others are limited to a single speaker. For example, Sonos lets you combine its PLAYBAR, SUB, and two PLAY speakers to create a true 5.1-channel surround-sound system. These individual speakers might be peppered around the house, but you can move them all together into the family room to create a temporary surround-sound system for movie night. If you like the idea of adding a soundbar to your family room TV, check out wireless options from Denon, Samsung, and others.

Sharing songs with your speakers
If your friends would like to stream their music when they visit, they will, in most cases, need to join your Wi-Fi network and have the app installed on their phone to play back audio.

Bluetooth is your best bet if you’re in the market for portable, battery-powered speakers or outdoor speakers. Polk Audio offers a portable speaker for its AllPlay system, but due to restrictions of this standard, it’ll need to stay within Wi-Fi range to work. AllPlay is soon expected to support direct streaming without a Wi-Fi network.

The playback of most wireless audio systems is no better than CD-quality. The exceptions are products from Bluesound, which are designed for audiophiles and support up to 24-bit, 96kHz audio. Bluesound also offers a variety of speakers and streaming boxes, just like Sonos does.