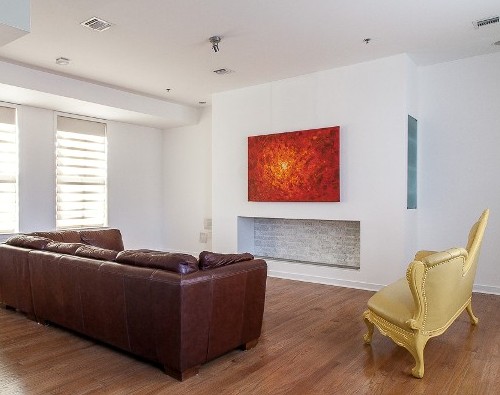 If you ask an interior decorator about loudspeakers, he or she will tell you they should be heard and not seen. Maybe some home theater enthusiasts and audiophiles would disagree, but a lot of people hold the opinion that speakers in an audio system should be as hidden as possible. Imagine if we could actually have invisible speakers?

That’s no Harry Potter trick anymore. Speakers can be invisible, at least in the strictest sense, meaning they’re in the room, you just don’t see them.

There are two main ways to make a speaker actually invisible, and both involve putting it behind something else.

The first, and most ingenious way, is with a kind of in-wall speaker that actually sits completely flush against the drywall (or other wall material), and then gets plastered over and painted so the speaker becomes 100 percent a part of the wall—-no visible grill.

The other way is to hide it behind something that is visible, such as a piece of art or acoustically transparent wall fabric, which we’ll tackle in another article.

Oh, there’s another way—you can conceal the speakers as something else. Several companies now make LED smart bulbs that also double as Bluetooth speakers. You can set up one or more in a room or around the house to provide music and shed some lights. You can read about those here, here and here.

Invisible speakers can be used for whole-house music systems or home theaters and media rooms.

For this article, let’s look at a few in-wall invisible speakers, perfect for people who want sound everywhere, without having to look at speakers.

The DS700se is Triad’s 2-way invisible loudspeaker. The DS700se has two vibration panels per channel. One tackles the high frequencies, with another in there for the lows. With each panel fed by an external crossover/limiter, the speaker boasts a frequency response of 50Hz to 20kHz and power handling of up to 200 watts per channel. Designed to fit between the typical wall studs, the DS700se has a powder-coated aluminum frame, an extremely rigid aluminum honeycomb core with paper skin covering, and electro-mechanical drive devices. More info here.

The Sonance IS4 speakers each feature a 4-inch squar planar diaphragm tweeter driven by a 1-inch voice coil. That’s matched with a 17-square inch mid-range planar driver and a and a planar diaphragm woofer. Sonance Invisible Series features 170Ã‹Å¡ of dispersion, which means the sound is spread out wider from the speaker, delivering even volume levels and better sound quality throughout the entire space. The speaker’s 2-inch depth makes them easy to install in a variety of walls. Back boxes are available. The invisible speaker’s paper surface is ready for covering with plaster, joint compound, paint and wallpaper. $1,600/pair. More info here.

The Live-Wall LW1210 has a three-layer design with a woven fiberglass diaphragm, along with “aeronautical adhesives and an asymmetrical star pattern.” The makeup promises to eliminate standing waves and deliver a perfectly balanced frequency response. Other features of the invisible speaker include a 160-degree off-axis dispersion (-3dB), a 1.25-inch voice coil, a 6dB down point at 65Hz, and a 100-watt protection circuit. The LW1210 is compact, but also has durable materials that can withstand high-humidity installations such as bathrooms. The LW1210 is priced at $500 each. More info here.

Sometimes, well, often actually, a set of stereo speakers isn’t enough. Just as floorstanding speakers sound better with a subwoofer, so do in-wall invisible speakers. Stealth Acoustics offers the B30G invisible subwoofer. The subwoofer has a rigid frame that attaches directly to standard structural framing. The paintable active diaphragm face is bonded to the frame of the speaker panel, creating an active area surrounded by a stable mounting area. The B30G may be installed in either the wall or ceiling and on-site finishing options include latex paint, light wallpaper, fabrics and selected texture coats. The B30G panel incorporates two acoustically coupled, high-quality, high-power 8-inch cone woofers. The panels work in pairs as a monaural output subwoofer. Check out a cool media room in New Jersey that’s outfitted with several Stealth Acoustics invisible speakers, plus a disappearing TV. More info here.

Also check out this speaker that’s made invisible by hiding it in a ceiling tile.

Read about this media room system comprised of all invisible speakers and electronics.