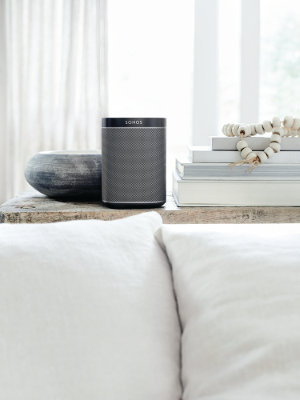 The first-generation home audio systems, while limited in their abilities, were surprisingly simple to use, and worked quite reliably. Barring the cursed scratched disc, CD players almost always performed as expected. And even a self-proclaimed technical dunce could figure out how to operate a rotary volume control knob.

Then something changed. Digital music began to make its way off of CDs and onto servers and hard drives. Predictably, the way people acquired and consumed music would never be the same. Like a teenager struggling through awkward adolescence, home audio system manufacturers grasped to find their identities in this turbulent time. Cumbersome, if well intentioned, solutions came to market aimed at helping users tame their digital music collections. Requiring countless hours of commissioning and ongoing library maintenance, they attempted to form hassle-free, simple, and affordable solutions.

More often than not, though, users ended up with a scattershot music collection of wildly ranging audio quality. Even if well-maintained, these music libraries were difficult to navigate due to clunky user-interface designs on remote controls and touchpanels. And most importantly, these systems frustrated many users with their proclivity to fail, typically at the most inopportune times. Silent dinner party anyone?

Mercifully, home audio systems have come of age. Emphasis on streaming audio has removed the tedium associated with maintaining a large music collection. Installation and setup are easier than ever before thanks to advances in wireless technologies. Manufacturers discovered that software and user-interface design shouldn’t be an afterthought. And, while improvements in the overall experience abound, prices continue to drop, bringing the cost of entry down dramatically. Keep reading to see why there’s never been a better time to invest in a home audio system.

Conversations about home audio usually conjure thoughts about hardware. After all, it takes sources, amplifiers, and speakers to make this all work. But one of the most significant improvements in modern home audio has little to do with the hardware. These days it’s all about streaming content. For a very low monthly subscription, or in some cases for free if you’re willing to tolerate occasional advertisements, online streaming services provide instant access to virtually any song imaginable.

No longer is the utility of a home audio system predicated on the amount of music you’ve purchased in the past. Cumbersome CD collections and unruly files spread across multiple hard drives have instead given way to cloud-based, on-demand access to tens of millions of songs. This means that the right music for any occasion is never more than a few button taps away.
Beyond simply providing access to massive online libraries, many streaming services offer intelligent ways of connecting users with the music they love. So-called “stations” can be created around a user’s tastes. The algorithms used to drive these stations continue to learn about your tastes, improving over time through simple user input about likes and dislikes. Socially shared, hand-picked playlists (often referred to as “curated playlists”) also allow users an easy way to discover new music by following tastemakers in their favorite genres. Home audio systems capable of leveraging these streaming services represent a major advancement over their predecessors–like the disconnected CD player.

Like most technologies in the home, audio systems have traditionally required a well-planned wiring infrastructure in order to function so that music could be distributed to multiple rooms. For homes in which audio and video systems were integrated early in the design process, this requirement does not represent a major hurdle, as the necessary wiring could be easily routed while the walls studs were exposed. In the vast majority of homes, however, it is a huge challenge. Moreover, in some instances, where for one reason or another retrofitting wireing is not an option, a lack of centralized infrastructure can be all but impossible to overcome.

Modern audio systems have greatly mitigated this would-be roadblock. Products like Sonos, Heos from Denon, and dozens of others, are being touted for their ability to wirelessly distribute digital audio throughout the home. This is accomplished using common technologies such as Wi-Fi and Bluetooth. Analog speaker wire may still be required if, for example, you plan to utilize in-wall or in-ceiling speakers. All the same, the ability to route audio throughout the home wirelessly has made home audio feasible for a much broader base of consumers to adopt.

Much can be said of the home audio systems that dominated the early 2000s. That they were intuitive to use For starters, they weren’t nearly as easy to use as the manufactuers claimed.One could assume that the lion’s share of product development resources in these early days was being consumed in an effort to simply make the products work. Whether for that reason, or others, it was clear that design of the user interface necessary to control the system was not a high priority for manufacturers. In fact, it was often left up to the employees at the home technology firm installing the product to design interfaces themselves, often from scratch. A process which, by no surprise, lead to results that were, uh, interesting (and often expensive), to put it kindly.

When the user interfaces of modern home audio systems are compared side by side with their predecessors, the improvements are striking. As it is with any new software or app, there is still a learning curve involved with mastering these new and improved user interfaces. But overall there is no question that best practices related to user interface design have matured, and these modern systems are far easier to operate. The most successful companies in the home audio business have clearly prioritized usability. This decision has resulted in systems that are downright delightful to use, especially when compared to the clunky designs so prevalent in the early days of home audio.

A large factor coloring people’s opinion of home audio is the perceived cost of entry. After all, purchasing a system used to be a bit of an all-or-nothing proposition. The need for a highly centralized wiring infrastructure drove up front-end costs. Hardware prices were substantial in large part because manufacturers were operating at the bleeding edge. Smartphones and tablets did not yet exist, which meant that proprietary keypads, and/or ultra-expensive dedicated touchpanels were required to interact with the system. And then, after the consumer thought they had all the costs digested, came the programming charges.

It’s easy to see why home audio is often perceived as financially out of reach. In spite of this perception, the cost to get started with a home audio system has dropped dramatically. There are a number of converging factors at play. As with all consumer technologies, innovations in manufacturing have been steadily driving down the cost on a per unit (or rather per audio-zone) basis. Additionally, technologies such as wireless distribution and app-based setup have made the systems vastly more scalable than they used to be. Unlike in the past, consumers can now start with as little as a single zone, then easily add more as their needs change or budget allows. Lastly, smartphone and tablet based apps have eliminated the need for the dedicated keypads and touchpanels which house audio systems used to require.

“We had it at our old house and never used it. We’re just not interested.” I am struck by how often I hear this, or some iteration of it, when discussing home audio with a prospective client. As both a home technology professional, and someone who simply enjoys music, it’s an objection I am compelled to question. There is, of course, the chance that a given client simply has no desire for home audio, no matter how good the implementation. Some tactful prying, however, typically reveals that the hesitation stems less from any distaste for music than it does from a previous sub-par experience.

As you can see, yesteryear’s home audio systems were expensive, difficult to install, and even harder to maintain. Additionally these systems typically required a highly tech-savvy (or extremely patient) end-user to operate them with any degree of success. Moreover, the usefulness of these legacy systems was largely dependent on the amount of music you owned, be it in the form of CD’s, locally stored digital files, or otherwise.

Music is arguably one of the best ways to enhance a home’s ambiance, and enrich our lives. Thankfully there’s never been a better time to invest in the technology that makes this possible. Today’s house audio systems cost less, perform better, and do more than ever before.