This article was originally published on March 4, 2013

Most of today’s soundbars are one-trick ponies, offering an important upgrade over your TV’s built-in crappy speakers. Some do a decent job of creating a three-dimensional soundfield that simulates a 5.1 system, while some make hookup easy via one or two cables and wireless subwoofers. The new Sonos PLAYBAR does both, but goes far beyond being just a TV speaker replacement. The PLAYBAR may be the most sophisticated speaker product you can get, though it still won’t be enough for some people.

Sonos’ main product line is composed of a variety of speakers and connection devices designed to make multiroom music easy for anyone. With a Sonos system, you can access a wide variety of streaming music sources (Pandora, Slacker, Spotify, Rhapsody, etc.), as well as your own digital music selection, all over a wireless mesh network that covers your house. A basic Sonos system includes a gateway that connects to your Internet router and speakers and/or amplifiers to spread Sonos to the room(s) where you want music (read about the Sonos PLAY:3 speaker here and the Sonos Sub here). You can choose your music and set the volume through a remote app for either iOS or Android. In addition, control systems such as Control4 and URC’s Total Control also provide integration with the Sonos environment.

The PLAYBAR is quite an advanced piece of engineering, being built around nine drivers — six midrange drivers and three tweeters, all custom designed in-house and manufactured by Sonos. The drivers are mounted on a 45-degree angle, allowing the speaker to be hung flat on a wall or rest on a tabletop with no change in the directionality of the speaker. Two of the three tweeters are mounted on the ends of the unit, at angles that help create a wide, enveloping soundfield. Each drive unit is powered by its own Sonos-designed class D amplifier. More than 20 different automatic tunings help create the PLAYBAR’s sound.

Like the other parts of the Sonos family, the PLAYBAR is extremely easy to set up and use. Going from unpacking to use will take a person about 10 minutes. The speaker’s connection include an AC power cord and a digital optical cable for the audio. You can connect the speaker to your home network with an Ethernet cable to your router or wirelessly via a Sonos Bridge, if your router isn’t near the TV. The ideal user is someone who already has a Sonos system in the house and wants to add the PLAYBAR. In any case, once connected to the home network, Sonos sets up its own Wi-Fi network to speak to other Sonos components in the house.

The PLAYBAR doesn’t come with a remote, so you won’t be adding to your living room’s remote clutter. For most of the speaker’s tricks, you’ll need the smartphone app. However, for simply adjusting the volume, the PLAYBAR lets you use your TV’s existing remote via a built-in IR sensor in the speakers. The PLAYBAR’s app includes step-by-step instructions to set up that trick. Being able to use your TV’s remote (or your DVR remote, which is what I did) will be a big relief for people who were worried that they’d have to flip on an iPhone app every time they wanted to turn the volume down during commercials.

The Most Versatile Speaker

So what can a PLAYBAR do that other soundbars can’t? A lot, actually. In fact, its TV speaker capabilities are far from the most interesting thing about it.

First, the PLAYBAR can easily be laid flat on a table or hung on a wall (wall-mounting hardware costs extra). A built-in orientation sensor changes the system’s EQ to accommodate the speaker’s position.

As I noted earlier, there’s only one audio connection in the system—a digital optical input—that connects your TV to the speaker. All your TV sources first need to be connected to your TV via whatever connection you prefer (most likely HDMI). This is convenient if you like the idea of one cable between your TV and the speaker, but there are some tradeoffs I’ll get to later.

The optical connection to the speakers does more than just let you listen to your TV audio over the soundbar. It also makes your TV audio part of a larger Sonos audio system, assuming the PLAYBAR isn’t the only Sonos component in your house. This means that if you want to listen to a baseball game both in your living room and another part of the house, you can direct the TV’s audio to another Sonos component, such as a PLAY:3 speaker. This feature is only available via the “Group” option, which means you can’t play TV audio on the dining room’s PLAY:5 and Pandora on the PLAYBAR. They have to be playing the same thing. 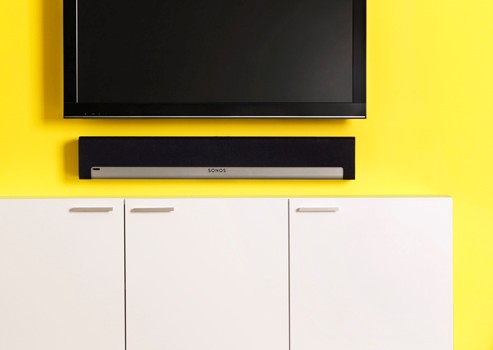 While that’s cool, you don’t get a PLAYBAR because you’re only interested in your TV’s audio. You get it because you want easy access to all that online content—and much of it (Pandora, Slacker, Songza, and TuneIn) is free. The smartphone app puts nearly any music you can possibly imagine at your fingertips. If you have other Sonos components, you can play the same music all over the house or different music in each room, all with the same single Internet connection. There’s even a cool AirPlay-like feature that uses Wi-Fi to stream your iPhone’s music to your Sonos system.

Within the PLAYBAR, TV audio takes priority. That means if you’re playing Pandora music and switch on the TV, the PLAYBAR automatically switches to the TV’s audio signal.

While most people will select a soundbar just to replace their TV’s speakers, some may still want the full 5.1 experience. The PLAYBAR actually allows for that. With a PLAYBAR you can add a pair of PLAY:3 speakers and even a Sonos Sub to create a 5.1 system. The Sonos app will walk you through the process and make the appropriate sound processing changes to direct the signal appropriately.

As I’ve written in the past, I like the ease of use and versatility of Sonos products, but they also sound darn good. In an average size living room, a PLAYBAR sounds clear, offers a wide dynamic range, and creates a very full audio experience. It’s a huge leap over anything you’ll get from your TV’s speakers. Using Tone Generator Pro, I was especially impressed with how deep the system could go, though better bass can be had from adding the Sonos Sub.

For most music listening, the PLAYBAR offered lots of detail, evident when playing Carsie Blanton’s album Buoy. It’s full of jazzy, sorta pop-ish songs that I can’t help but like and the guitar twang, toe taps and her lovely voice filled my living room nicely.

For movies and TV, the speaker delivers as well. Listening to The Walking Dead over the PLAYBAR versus my TV’s speakers brought extra dimensions of creepiness to the show.

While the PLAYBAR does create a decent three-dimensional illusion, it doesn’t give you a real Dolby Digital or DTS-like immersion on its own. When you up the system to 5.1, you get much more of a movie feel. At times I found the rear channels to be a bit more pronounced than you’d get from a properly balanced 5.1 system with a receiver, though I also find that many people like their rear channels turned up more than what they really should be. Most of the time the PLAYBAR did a very good job of steering sound around to the rear channels. When watching/listening to the horse stampede scene in Abe Lincoln: Vampire Hunter with the added PLAY:3 speakers for surrounds, the whole room filled with horse clatter and vampire teeth gnashing.

So for all the coolness that the PLAYBAR offers, you do have to suffer through some tradeoffs. First, and I know this is hard for many people to believe, but not everyone owns a smartphone. If you don’t have a smartphone (or at least an iPod touch) than you can’t use the PLAYBAR — end of story (a control system such as Control4 is one workaround, but buying an iPod is cheaper).

Sonos went for simplicity by using an optical input as the only audio input for the system. That does make the speaker easy to set up, but it automatically imposes audio limits on a lot of TVs, including mine. While most TVs include optical as an audio return channel, many also down-convert that signal to stereo. That means that while your HDMI cable may be delivering Dolby Digital to the TV, the TV isn’t delivering that to the PLAYBAR. If you’ve set the system up for 5.1 (with a Sonos Sub and two PLAY:3s), then you still won’t get real Dolby Digital out of it. Will you notice? Actually, probably not. When playing movies and TV shows, the rear PLAY:3 speakers worked well, adding ambient sounds and panning effects where they seemed appropriate. However, when I tried to play speaker-specific test tones from a THX Optimizer Blu-ray, the rear channels played nothing because as far as the PLAYBAR was concerned, it wasn’t getting rear channel info from my TV’s optical output.

That last tradeoff won’t affect every user in the same way, because some TVs do pass on the full audio signal, but many don’t. Still, you probably won’t miss it anyway.

What I’d really like to see is HDMI inputs on this system, and then a single HDMI to the TV. Letting you hook up your source components–DVD, Blu-ray, etc.–via HDMI directly to the soundbar would take the TV’s audio idiosyncrasies out of the picture.

Is PLAYBAR for You?

If any of this sounds interesting (and it’s hard to believe it doesn’t), you’ll want to ask yourself whether the PLAYBAR fits into the way you use your TV and listen to music. I like that the system offers users the opportunity to assemble it as a 5.1 system, but the extra cost of that option might not justify the effort ($299 for each PLAY:3 and $699 for the subwoofer). PLAYBAR by itself is probably more than sufficient for most living room entertainment systems without taking up much space or tech know-how. At $699, the PLAYBAR is one of the more expensive soundbars you’ll run into, but certainly not the most expensive, and it’s the only one with built-in streaming and multiroom integration capabilities. It delivers everything it promises and the immense access to online music means you’ll never get bored with it. Make it part of a whole-house Sonos system, and your place will be the envy of the neighborhood for parties.

But, if you’re looking to outfit a dedicated home theater or listening room, then the PLAYBAR’s convenience tradeoffs aren’t going to be for you. A dedicated home theater receiver, quality stand-alone speakers, and some streaming media device (such as a Roku) will be better, though also more expensive and more difficult to set up. PLAYBAR is a great solution for people who want ease and abundance — and that sounds pretty good to me.