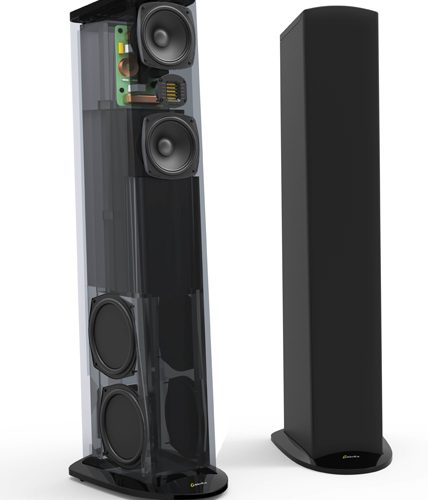 Bigger is always better, right? GoldenEar is certainly making a good argument for that statement, by announcing a larger version of the company’s award-winning Triton Seven loudspeaker. The new Triton Five is the latest of the tower speakers in the company’s Triton lineup.

However, unlike the previously released Triton One, Two, and Three, this one doesn’t have a built-in subwoofer. It certainly seems to make up for that in oomph, promising a better dynamic range and deep bass extension. It does that by packing two 6-inch cast-basket drivers, four 8-inch planar sub-bass radiators, and one High-Velocity Folded Ribbon tweeter into each slender cabinet.

Designed both for two-channel stereo and multi-channel home theater systems, the speaker doesn’t just look cool, but uses that design to align the driver array to ear level so you’ll never miss a note. Other features include Frequency Dependent Damping bass loading technology, a frequency response of 26Hz to 35kHz, and an efficiency rating of 90dB.

“The Five’s unique cabinet shape is both acoustically purposeful as well as strikingly attractive,” said the company’s announcement. “Its stylish rearward rake both aligns the driver array precisely to ear level at the listening position, as well as results in non-parallel front and rear baffles for better control of internal standing waves. And, of course, the non-parallel side cabinet walls and slanted top provide the same acoustical performance benefits, as well as looking great. The Five’s precise and totally box-less imaging characteristics are further enhanced by the narrow front baffle, as well as the diffraction-less designer grille cloth sock which adds additional sheer damping to the cabinet. In addition, the beautifully sculpted piano-gloss black base adds significantly to the Five’s dynamic stability.”

GoldenEar will start selling the Triton Five speakers in March, with an MSRP of $999 each. The company also offers matching surrounds, center channels, and even height speakers for Dolby Atmos installations.