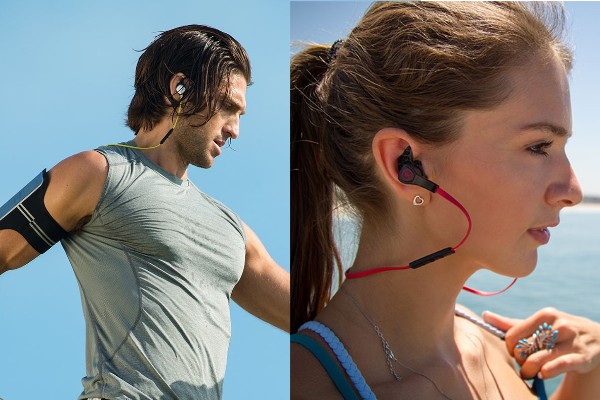 Bluetooth in-ear earbuds for music listening often present more problems than their wireless convenience solve, both aural and functional. Sonically, just as the Genesis Effect in Star Trek II: The Wrath of Kahn replaces a living planet’s ecosystem in favor of its own matrix, Bluetooth overlays an inferior codec called SBC (sub-band coding) over your compressed (or not) tunes, degrading the sound (and the aptX sonic solution to SBC only works with Android phones, not iPhone). Functionally, you have to continually make sure your Bluetooth headphones are paired with your device, and then the phones barely last a day of listening – 6-to-10 hours with no personal listening alternative if the bud’s batteries are sucked dry.

But losing that dangling cord to your phone is a great lure; sales of Bluetooth headphones have quintupled in the last four years. Of particular popularity have been so-called “sport” in-ear models for exercising when a long cord can not only be annoying but dangerous. Bluetooth sport earbuds are sweat- and/or waterproof and often come with some sort of ear fins, wings or stabilizers to make sure the buds stay in your ears while you’re running, jumping or even standing still.

Here are our choices for the best in-ear Bluetooth earbuds, sport or otherwise. We based our choices not only on sound, but ergonomics (fit and comfort), battery life and price – generally between $130-$150 is the sweet spot. I listened to a number of sub-$50 models and none provide decent sound or fit, and you don’t get enough sonic or ergonomic extras to justify the price of costlier models.

Instead of an around-the-neck band, the LG HBS-series of Bluetooth headphones, including the HBS-900 Tone Infinim, uses an sit-on-the-collar horseshoe to house its massive 14-hour music playback battery as well as a plethora of music transport, phone answering and volume controls. The earbuds themselves pullout and spring retract into the ends of the horseshoe stems, which is the biggest differences between the 900 and its lower-priced HBS siblings, which use magnets to secure the buds. Aurally, the HBS-900 include Harman Kardon Signature Sound, which translates to crisp highs and midranges, measured bass and the highest volume of any Bluetooth phones we played with. Volume and quality of incoming calls was also exceptional compared to all other phones. One drawback: their on-the-collar design makes them a bit awkward when worn under a winter jacket and/or scarf. $149.99

This would be a weird list if Plantronics weren’t represented; the company was one of Bluetooth’s earliest supporters for stereo headphones and consistently makes the best overall Bluetooth talking and listening products. The moisture-proof and tight-fitting in-ear BackBeat GO 2 produce the most natural Bluetooth music of any single cord-behind-the-neck model I listened to, with surprising soundstage and frequency range. They also rank among the best for conversation – clear voices with no distortion, although they could use better ambient noise reduction. You get only 4.5 hours of tune listening, but the included red battery case provides on-the-go charging and 14.5 total hours of tunes and talking. They’re available in black or white. $99.99

The sound emanating from the sweat-proof Outdoor Tech Orcas OT5200 in-ear Bluetooth headphones are a bit brighter than the similarly-styled Plantronics but retain plenty of satisfying consistent bass, plus you get six hours of talk/music time between charges. Like the Plantronics, the mic and volume controls are in-line to make them easier to access, and you can add optional in-ear stabilizer wings to make sure the buds stay secure where you stick them while jogging or aerobicizing. Unlike any other in-ear Bluetooth bud, Outdoor Tech takes the “orca” name seriously – the company donates $1 from each Orcas sold to the Whaleman Foundation. $99.95

To be honest, I’d never heard of Photive until I ran across the Silverbuds (as well as their less expensive sibling, the EB-10) on an Amazon search, and I’m glad I did. Aside from their unexpectedly solid sonics, they offer two ergonomic advantages over the Plantronics and Outdoor Tech (hence the price premium): 10 hours of battery life, the longest I found among these single-cord Bluetooth headphones, and the two magnetic earbuds stick back-to-back so they’ll stay where they are when just hanging down on your chest. Like most of sport models, the Silverbuds are sweat- and rain-resistant and include stabilizer wings for dependable in-ear fit. $129.95

Also, read about the best on-ear headphones under $150.