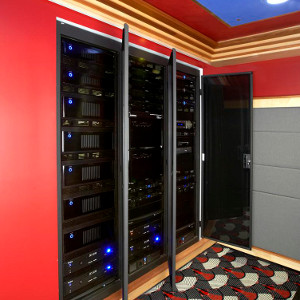 If you like to listen to music, all day long, in every room of your house, you’re a prime candidate for a whole-house music system. Likewise, for a whole-house video system if you like to watch movies and recorded programs on a number of different TVs. Systems designed to distribute audio and video signals over cabling to multiple loudspeakers and TVs are widely available, and in configurations to handle any number of components. A custom electronics professional (CE pro) can recommend the best whole-house A/V system for the job. He may also offer a few installation options.

In a traditional setup, all of the components including satellite receivers, DVRs, media servers, and others are installed in a closet or utility room along with the distribution equipment. Cabling is run from this distribution hub to each TV and loudspeaker on the network. One of the biggest benefits of this type of installation is that it eliminates the need for each entertainment area to have its own stack of components. This type of hub will also include components for home control operations, lighting control, thermostats and more, as well as networking gear.

However, there are other installation options that might actually work better for your particular needs. If your house is large and sprawling, often it’s better to have more than one distribution hub. One hub could serve the main floor, for example, while a second hub distributes audio and video signals to the zones on the second level. This setup allows your CE pro to run shorter lengths of cabling than had there been just one distribution hub. This not only minimizes the labor involved in fishing cabling, but is often better for overall system performance. The less a signal has to travel, the less chance it will pick up interference or lose strength.

A third option combines a distribution hub with local components. Although stowing your equipment away in a closet or utility room eliminates much of the tech clutter in your entertainment rooms, it may be inconvenient if you still like to pop a disc into a player now and again. For this reason, a CE pro might suggest that you keep a Blu-ray player, for example, at each TV while the rest of the gear goes into the equipment rack at the distribution hub.

Finally, there is the option of going wireless. Wireless transmission technologies, such as mesh networking, have become more robust and reliable over the years, making it a viable option for owners of existing homes in which fishing cabling may be difficult and/or expensive. This setup offers the benefit of being the most versatile, as you are able move the equipment around the house, or even take it with you should you buy a new house.