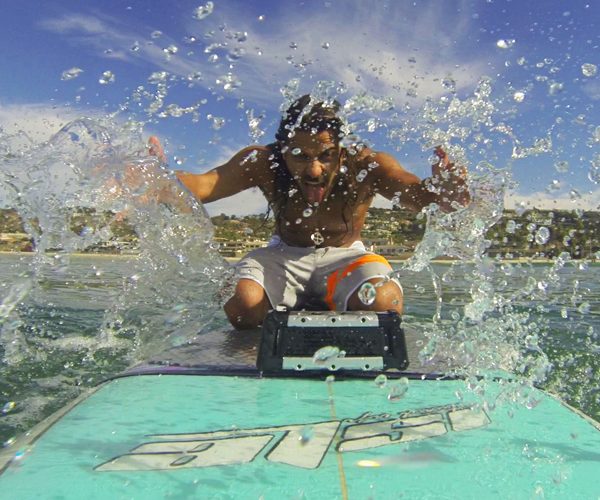 Everyone wants to take music on the go these days—especially during those summer months. This is the time where you’re usually on the go. You go to work, go to the beach, and go on vacation. How can you not have a soundtrack for your summer travels?

It used to be that most portable music options were designed for solo listeners or just didn’t sound very good. And the ones that did sound good were typically something you didn’t want anywhere near water.

Well guess what? There are a crazy number of Bluetooth wireless speakers on the market these days. And a lot of those speakers actually sound really good. Want to know the best way to choose? Maybe go with the one that will survive your affinity for cannonballs and Marco Polo.

If you plan to rock out by the pool, at the beach, or even by the tub, you may want to consider one of these three splash-proof wireless speakers for summer.

Fugoo Tough
It may not be the prettiest speaker on our list, but it’s the one that can take a serious beating. The Tough is, well… tough. It’s made of fiber-reinforced resin and solid aluminum that can withstand the elements. In fact, this thing can be submerged in 3 feet of water for up to 30 minutes. (Some claim more, but it’s not made to be a pool toy.) It’s also a Bluetooth speaker with two tweeters, two mid/sub drivers and two passive radiators, all of which are strategically placed to crank out 360 degrees of immersive sound. Other features include a frequency response of 60Hz – 20KHz, up to 40 hours of battery life, Siri/Google Plus integration, and speakerphone perks. If you can wait another month, Fugoo plans to start shipping the Tough XL ($329.99), a supersized version with eight acoustic drivers, three extra control buttons, and a USB port to charge your phone.

UE Megaboom
Weighing in at less than 2 pounds, this slick speaker is ready to travel to the backyard, the beach or wherever else you want it to be. It travels light too, since it uses Bluetooth to connect to all of the portable devices you’re already carrying. Packing in two 2-inch drivers, two 4-inch passive radiators, a five-band EQ and a frequency range of 65Hz – 20kHz, the Megaboom is made for cranking out “freakishly amazing 360-degree sound.” The appearance certainly helps with that, since it’s designed to deliver audio at almost angle, almost anywhere. And really, it’s made to work anywhere. That shiny, durable enclosure is also IPX7 certified (that means it’s waterproof!), with a stain-resistant acoustic skin. Besides looking pretty for a long time, it can also play music for a long time. The rechargeable battery promises up to 20 hours of playtime on a full charge. If you want even more boom, the speaker can also be paired with a second UE Megaboom or even the original UE Boom, so you can double your pleasure and your sound.

Braven BRV-HD
Braven has a bevy of waterproof speakers, but the BRV-HD promises to be the biggest, baddest Bluetooth speaker yet. It has two drivers and two passive radiators, as well as SRS WOW HD sound and wireless daisy-chaining features so you can link a second BRV-HD speaker. Of course, it also has a water-resistant exterior. It even promises up to 28 hours of wireless playtime or you can use that portable power bank to charge other devices while on the go. Other features include Bluetooth streaming up to 33 feet, a built-in microphone, a noise-canceling speakerphone, a 3.5mm stereo input, and micro-USB-to-USB data ports.