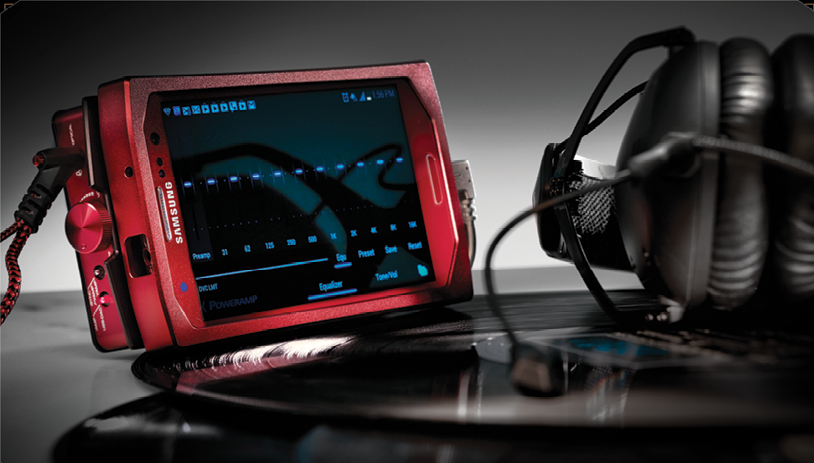 Let’s assume you’re a finicky music listener. This means that, to your sensitive ears, the audio emanating from your smartphone or laptop ranges from barely tolerable to nails dragged across a blackboard.

Why does your smartphone sound so poor (relatively speaking)? Because a smartphone is a Jack-of-all-trades and master of few, especially with high-quality music output.

Your first move to better music quality should be to upgrade your headphones. But higher-caliber cans may actually make things worse by accentuating the aural errors resulting from digitization and compression, as well as from player noise, such as bad circuitry, poor sound cards, adjacent components, or even an internal fan. And even if you opt for better phones, your portable device might not be powerful enough to effectively drive them.

If higher-quality headphones don’t improve your music matters or maybe make them worse, your next portable aural improvement step is the addition of an external amplifier and/or DAC/amp combo.

DAC Details
A DAC, or digital-to-analog converter, is the circuitry that converts a digital audio signal into an analog signal that can be outputted and heard through analog speakers or headphones. Once in analog, the signal has to be amplified, especially when it’s being piped through speakers. All digital music devices are equipped with a DAC. The question is, is this built-in DAC better than an external version—connected via USB or on some Apple iOS-specific products via the Lightning jack—at improving sonic performance?

All digital music devices also include built-in amplification circuitry, but the amps built into most portable players aren’t designed to drive larger or more demanding headphones or speakers. Therefore, adding a more powerful amp helps get the most out of what you’re listening to.

How much do these portable amplifiers and/or DAC/amp combos cost? Anywhere from $100 (or less) for the simplest solutions to $2,500 for the rapturously reviewed Chord Hugo DAC/amp.

In between are a wide variety of DAC/amps with a variety of specs and features and carrying a wide range of price tags. Possibly the widest variety of DAC/amp choices is offered by HRT (High Resolution Technologies), which sells seven different models priced between $70 and $500. But the market also includes DAC/amps such as:


Which portable aural boosting DAC device is right for you? It depends how finicky your ears are, what your music source is, how much sound control you want, which headphones or speakers you’re using and, considering some of the high prices, how much improvement you can afford.

But perhaps you don’t actually need a DAC.

Should You Buy a Headphone DAC?
Whether you choose a dedicated external portable amplifier or a DAC/amp combo depends on how well you think the DAC in your digital device is performing and how the headphones you wear sound.

You may not even need a DAC. DACs built into modern state-of-the-art smartphones and laptops convert pretty well for the usual 256 or 320kbps compressed music files—not audiophile quality, perhaps, but serviceable for standard lower-expectation listening, and certainly an improvement from the early days of digital audio.

Another tester discovered, “The little iPhones hold their own in terms of 16-bit accuracy. As with most devices, 16-bit, 44kHz audio is not an issue these days and all competent devices would have no problem decoding this most basic bit depth and sample rate.”

So do you need an external DAC? Other than the show-off factor, the only justifiable reason to invest in one is if your ears and brain can detect background hiss often caused by internal mechanical noise such as an internal fan or aural jitter. Also, the playback device’s internal circuitry timing may be off, resulting in a subtle warping sound similar to a slightly mistracking audio tape. In a laptop or PC, the generic sound card may be unworthy. Distortion, especially at high volumes, is endemic to weaker sound systems, and an external DAC can reduce or smooth out more stressful sonic passages.

Or, instead of a dedicated DAC, perhaps you should listen to better—and by that I mean higher resolution—music: tunes ripped at lower compression rates or none at all. Pony up for a Pono high resolution audio player ($399) from Neil Young, the Sony Hi-Res Walkman ($300) or one of Astell & Kern’s portable music players, and then either re-rip all of your tracks uncompressed or in a lossless format, and/or buy or re-buy your tracks from a variety of Hi-Res music stores.

One other solution is a headphone optimization app such as Audyssey’s AMP app for Apple iOS. The app is free, but you buy a specially-EQ’d profile for your make/model of headphones for $1.99.

Okay, so you think your portable music gear might benefit from an external DAC. Which do you buy and/or how much should you spend?

Since your listening standards are so subjective, any meaningful DAC buying advice will be, too. The best DACs offer at least 24-bit and 96-to-192kHz processing. If specs seem similar, narrow down the DAC/amp product universe by focusing on physical attributes:

Also, bear in mind that once you connect your cans to a DAC/amp, their in-line mic and track controls become useless.

Thankfully, matching a dedicated portable amp, with or without a DAC, to your headphones is far more straightforward and objective.

Low-Power Player/High-Power Headphones
There’s really only one question to ask yourself before buying a headphone amp: Are you getting enough volume?

And we’re not only talking about standard, passive headphones, here. Even though in-ear monitors (IEM) don’t need a lot of power to drive them and often don’t require an external amp, the HeadAmp Pico Slim ($399), JDS Labs C5D ($249), Ray Samuels Audio Shadow ($395), and HiFi M8 ($700) portable amps all are expressly designed to be used with more demanding buds such as one of these. And Bluetooth headphones include their own amp, so they don’t need external amplification.

But large over-the-ear cans are like small speakers and need power to get to the optimum volume.
How do you find the right DAC/amp or dedicated portable amp for your headphones?

“Matching an amp to your headphones from a technical standpoint is relatively easy if you have the specifications,” explains Jitesh Parmar, co-founder with Pius Tang of Ontario, Canada-based Antiseed, which is developing the Kori dedicated headphone amplifier. “It’s a matter of figuring out how much power you need in order to reach an adequate volume given your headphone’s impedance and sensitivity specs. High impedance headphones generally require more voltage to get to a good listening level while low impedance headphones may require more current. Once you have these measures, you can then look up the amp’s power specs and determine whether it’s adequate enough for you.”

Or, more simply—and generally speaking—the bigger the cans, the more power they’re going to need to effectively drive them.

To facilitate your headphone-to-amp spec matching calculation, feed your headphone specs into the free, downloadable Headphone Power Calculator Spreadsheet designed by Rob Robinette. The spreadsheet also is available as a free Google app in the Google Play store. Then match the results to your remaining pool of external DAC/amp combos or dedicated headphone amps.

Hopefully, once you’ve made your DAC/amp or amp-buying calculation and decision, you’ll finally be able to hear what you think you’ve been missing. EH

Stewart Wolpin has been writing about consumer electronics for more than 30 years for a wide variety of consumer, hobbyist, and trade publications.