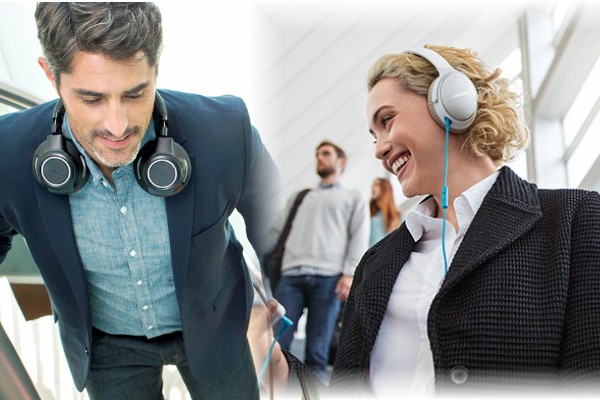 Noise-cancelling headphones are favorites of frequent airplane travelers due to their ability to cut out the white noise of a jet engine (and the snoring of the person seated next to you).

A set of snug canal-clogging in-ear sound-isolating earbuds can block just as much extraneous ambient noise, such as airplane engine hum, as noise canceling headphones, IMHO – sans the annoying ear pressure. Plus, in-ears are smaller and easier to tote aboard a plane and don’t need batteries. Even better at passive noise elimination are custom phones molded to precisely fit and clog your canal, such as those from Ultimate Ears or Iggy Azalea’s and Depeche Mode’s favorite, ACS Custom. Read about the best earbuds under $100 here.

But that’s just me. Apparently a lot more people enjoy the idea of lugging and wearing battery-powered over-ear headphones filled with circuitry to eliminate high-pitched ambient audio instead. To each their own.

Rather than waiting to board a flight that was bound to be canceled because of the snow, we listened to varying active noise cancelling (ANC) phones with a YouTube video of Boeing in-cabin engine noise blaring at 80-85dB through my PC speakers.

Bose practically invented the noise cancelling headphone, and the current-gen of the company’s Quiet Comfort line, the QC25, hits the noise-canceling trifecta – best sounding, most effective noise canceling and most comfortable of all other noise canceling phones extant. Aurally, the QC25s are optimized to play with noise canceling on; when off (i.e. when the battery dies), music is thick and muddy. Being Bose, the QC25s stress the midrange with solid, natural bass. With ANC on, droning airplane engine noise is reduced to a dull, distant whooshing. Ergonomically and functionally, there’s iPhone-compatible in-line mic/volume controls, full ear-enveloping cups that are soft and comfy for lengthy listening jags, they fold flat for convenient portage, and the noise cancelling listening last 35 hours on a single AAA. $299.95

Read more about how to find the Best Audiophile Headphones here.

These Plantronics Backbeat Pros are four phones in one: wired, Bluetooth, ANC and Bluetooth+ANC. Since the BB Pros are not just “noise cancelling” headphones, the aural differences between the varying modes is minimal. Using Bluetooth, sound is sharp and spiky yet robust with a wide sound stage and more boomy bass than I expected. With ANC you lose a little fullness and boominess, far less of a sonic sacrifice than switching off ANC on ANC-only phones. While not quite as effective as dampening ambient sound as the QC25, the Backbeat Pros do defeat the heaviest engine drone, leaving only the slight sound of escaping steam. Mic and music controls are integrated into the full but slightly bulky ear cups, but there’s a switch that let’s you hear ambient noise – like the flight attendant asking what you want to drink and flight announcements – without removing the Pros. Their rechargeable battery provides up to 24 hours of combined Bluetooth-+ANC grooving, but I wouldn’t leave them on for that long – at 340 grams, they’re 40 percent heavier than the QC25s (nearly 200 grams). $249.99

Like the Plantronics Backbeat Pros, these full-cup Sony MDR-ZX770BN work in four modes: standard wired, Bluetooth, ANC and Bluetooth+ANC. An update of the ZX750BN, for an extra $30 you get improved Bluetooth audio from iPhones thanks to built-in AAC decoding. Like the Backbeat Pros (albeit not as effectively), the noise cancelling is the gravy, not the main course, so noise is more dampened, by about a third, than canceled. Overall, they sound velvety smooth and natural in plain Bluetooth, with crisp highs and a wide soundstage with present yet even bass. Also like the Pros (and unlike ANC-specific phones) you don’t sonically sacrifice when you switch off the noise cancelling, just some overall fullness, mostly in the midrange. The comfy 230-gram ZX770s do weigh a third less than the Backbeat Pros, but you lose the built-in mic for ambient noise listening with the phones on and the rechargeable battery provides only around half (13 hours) of Plantronics’ massive Bluetooth+ANC listening time. $229.99

For around a third the price of the Bose QC25 and less than half the price of the Plantronics and Sonys, these Audio-Technica ATH-ANC29 represent “almost” compared to the aforementioned alternatives: they sound almost as good – bright, midrange-centric with minimal but natural bass with the ANC on, muddy and thick off; they fit almost as well – on-ear rather than over but are tight for a solid fit, cushy and light $99.95