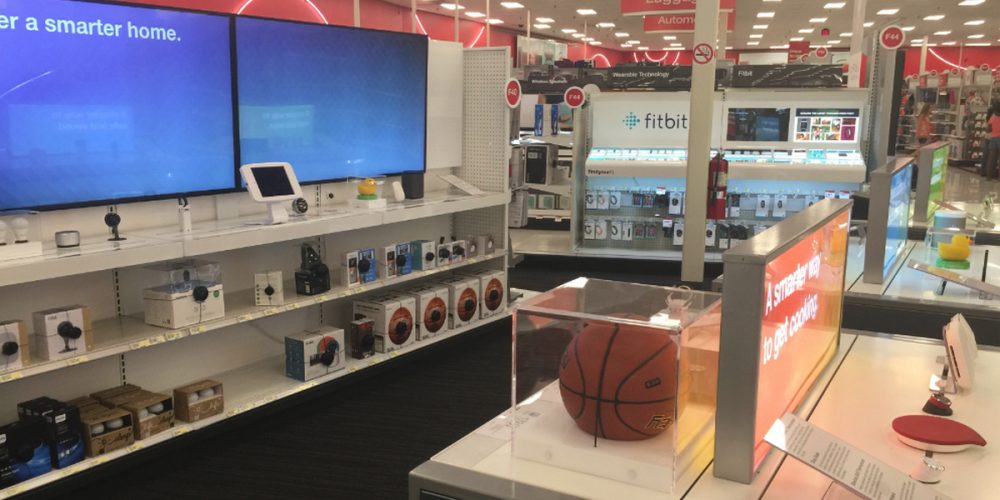 Target is trying to figure out how to sell home automation and IoT devices like many retailers before it. The latest effort from the mega-retailer is the “Connected Living Experience” in its Ridgedale store in Minnetonka, Minn., near Minneapolis.

Far from being the “Experience” promoted by Target, the Connected Living space is a more of a display positioned in the electronics section of the store, encompassing a collection of single-point solutions in six different categories that include such things as IP cameras, smart thermostats, musical rubber duckies and IoT basketballs, clustered in six tabletop arrays.

In all of this, there isn’t a home automation hub in sight. You wouldn’t even know a camera could talk to a light bulb unless you caught the cliche of a lifestyle video showing how your coffee starts brewing when you wake up.

It’s a far cry from Open House, Target’s dedicated smart-home showcase that opened in downtown San Francisco last year. That one is a modern exhibit with simulated demos meant to make a statement rather than sales, per se. Today, Open House is sort of a playhouse for tinkerers, showcasing smart-home platforms such as IFTTT, Yonomi, SmartThings, Works with Nest, and Muzzley. There’s also a rotating display of Indiegogo prototypes.

The statement space in San Francisco might make sense for that tech-savvy demographic, but not so much the Twin Cities nor most of anytown, U.S.A., where alarm clocks still flash 12:00.
And that’s the point of the Connected Living Experience in Minneapolis — to try to figure out how to create a revenue-generating IoT showcase for the masses. Open House was Target’s “first foray into learning how to merchandise” connected devices and “make connections in the San Francisco community,” says Target spokesperson Jenna Reck. “The next step is to take the dedicated experience at Open House and then figure out how to scale it.”

So the Ridgedale store is as much an experiment as Open House: “truly a test-and-learn” environment where Target can “see how consumers respond,” Reck says. For example, what do you do with connected baby products, Reck wonders: “Is it helpful to have them all in one [technology] space … and then also in the baby department?”

Right now, those connected baby products can only be found in the Connected Living area. Other products, like Nest thermostats, can still be found in Target’s Home department, while also on display in Connected Living. “That’s one of the things we’re testing,” Reck says. “Should they be in one place? Multiple places?”

Target Might Have the Right Approach: Simple Products, Limited Choice

At the end of the day, the Target connected-home initiative is nothing new. Virtually all the big retailers have tried piling rows of shelves with smart products. Those same retailers ultimately pulled the plug after a year or two of little ROI to show for all that expensive floor space.
Home Depot, Staples, Lowe’s, Walmart, Best Buy (barely), Sears, and of course Radio Shack back in the day haven’t really been able to pull it off, even when they invest in dedicated in-store staff that can ably answer questions about home technology.

The interesting thing about the new Target Connected Living Experience is that there’s almost no messaging around connectivity, other than connecting to the Internet — a major departure from the Open House store in San Francisco. There are no home automation hubs on display in Minnesota, nor any apparent effort to showcase the Works with Nest ecosystem.

I can’t say I disagree with the approach. Selling the integrated experience raises too many questions, scares consumers and ultimately limits sales. At the same time, offering too many product choices discourages shoppers from buying a product today. Right now. Instead, they must go home and think about it.
In Target’s case, the product selection doesn’t go deep or wide. There are few product categories and little choice in any given category. You can buy any doorbell cam you want, as long as it’s Ring. You can have any smart bulb as long as it’s Philips Hue.

Maybe Target will be successful where the others have not, given the retailer’s smallish selection and straightforward messaging around end devices rather than smart homes. Target has learned so far from its Ridgedale store that if there is any impulse buy in its Connected Living Experience, it’s the Tile device tracker. “It’s really simple with a very clear use case,” Reck says, adding that the price point is low ($25 for one; $70 for a four-pack) compared to other smart devices. At Ridgedale, the sales associate said the most frequent questions he gets from customers is: “What’s the duck do?” and “Why is the basketball $179?”

We’re all fond of seeing showcases of the connected home, where Mom wakes up and the lights slowly ramp up as she checks on the baby from her smartphone app and the coffee starts brewing. In reality, that stuff is complicated, both in concept and implementation.”I think people are at a different place than where we expected them to be,” Reck says. “There’s a lot of consumer education that needs to happen.”For now, Target seems likely to proceed with a model focused on simple point solutions, “but we also want to point to the potential,” says Reck. “We want to start showing them how things connect together.” At Ridgedale, integration is showcased in video loops of whole-house scenarios, while specially trained employees (Target says) are equipped to discuss smart-home possibilities beyond the Target “Experience.” So when will America be ready for the headier subject of home automation? Target isn’t sure right now, but the retailer aims to find out.
“That’s what we do as a company,” Reck says. “Know where consumers are today, but be able to show the potential.”